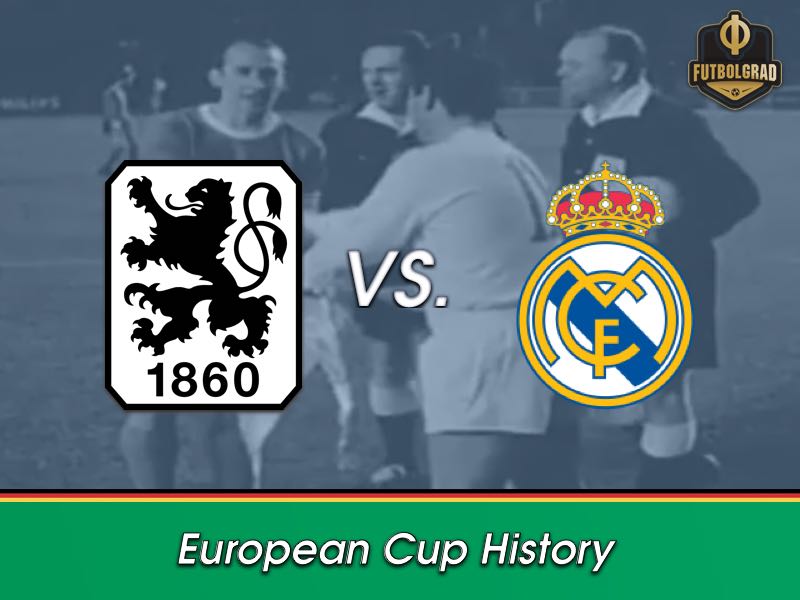 Between triumph and tragedy – The Lion’s tango with Real Madrid

It is an almost forgotten piece of UEFA European Cup history. Back in the 1966/67 season the competition, that is now called the Champions League was still played in a straight playoff format without a group stage. 32 national champions plus defending champions Real Madrid competed for Europe’s most important club competition at the time, and in the second round, the draw 1860 Munich vs Real Madrid saw the German champions play Spain’s biggest club.

Nowadays it is pretty common to see Real Madrid visit the Bavarian capital to face 1860’s city rival Bayern. The two German champions Bayern and Real Madrid met last year at the semi-final stage of the competition, for example. Back in the 1960s, however, the European Cup was still a relatively young competition.

It was also a time of the great unknown. Today there are pages that can help you with your Champions League betting and aid you to make the right decision on outcomes. Back in the 1960s, however, that was not the case as opponents were relatively unknown.

1860 Munich vs Real Madrid – a match of contrasts

1860 Munich had won the German championship in 1966. It was the club’s first national championship and until the present day remains the club’s biggest success. A team that included legendary players like goalkeeper Petar Radenković, midfielder Peter Grosser and striker Rudolf Brunnenmeier finished the 1965/66 season in first place ahead of Borussia Dortmund thanks to a matchday 34 draw against Hamburger SV.

As a result, 1860 Munich qualified for the 1966/67 edition of the European Cup. That competition started with a preliminary round that saw Bulgarian side CSKA Red Flag eliminate Sliema Wanderers from Malta (6-1 on aggregate) and East German side Vorwärts Berlin destroy Irish side Waterford 12-1 on aggregate.

The Münchner Löwen (the Lions from Munich) started the competition in the first round where they faced Omonia Nicosia from Cyprus. The Cypriotes were only a small obstacle for 1860 as on September 20, 1966, the Lions hammered Omonia 8-0 in the first leg with Timo Konietzka scoring four goals. Due to the politically difficult situation on the island at the time the second leg was played just five days later in the Bavarian town of Pocking where 1860 won 2-1 thanks to goals by Wilfrid Kohlars and Rudolf Brunnenmeier.

1860 were through to the next round where they were drawn against a title defenders Real Madrid. In many ways, 1860 Munich vs Real Madrid was a match of opposites. Although 1860 was among the most dominant teams in Germany at the time the club was nowhere near the status that the Royal Whites had.

Real, in fact, were already known as the white ballet. Furthermore, while 1860 had won just their first national championship in Germany in 1966 Real celebrated their sixth triumph in the European Cup that spring. Los Blancos beat Yugoslav champions Partizan thanks to goals by Amancio Amaro and Francisco Serena. This was no longer the side that included the likes of Ferenc Puskas and Alfredo di Stefano, however.

Yet Real Madrid was glitz and glamour, and the Estadio Santiago Bernabéu in Madrid was already one of the most glamorous facilities in European football. In contrast, 1860 played their home games at the Grünwalder Stadion at the heart of Giesing, the workers quarters of the Bavarian capital.

Unlike today, however, the Grünwalder was considered a relatively modern facility that could be filled with over 40,000 spectators, if necessary. The stadium, in fact, was often filled to its rafters with fans standing all the way up to the field when big clubs came to town. Such was the case, for example, in May 1960 when FC Santos defeated 1860 9-1 in front of 35,000 fans at the Grünwalder Stadion.

Real Madrid caused a similar run on tickets. Officially, 30,901 people were in attendance, but time witnesses claim that 40,000 people had crammed into the confines of the Grünwalder Stadion to see 1860 Munich vs Real Madrid. They would witness a fantastic match by the Lions, who were without their star players Timo Konietzka and Manfred Wagner. Both had been suspended for Bundesliga games, and back in the 1960s the ban was carried into European competitions as well significantly weakening the German champions 1860.

Not that it seemed to matter much. The Lions were more than competitive in the match and at times even dominated the Spaniards at will. Real, in the meantime, highlighted why they had lost their domestic title to city competitors Atlético Madrid the previous year.

After 38 minutes 1860 took the lead. Midfielder Hennes Küppers unleashed a shot from distance that beat Real keeper Antonio Betancort to give die Löwen the lead. 1860 Munich vs Real Madrid then ended 1-0 at the Grünwalder Stadion giving the Lions the advantage ahead of the second leg at the Bernabéu.

There, in front of 80,000, spectators 1860 once again took the lead. Once again it was Hannes Küppers with the magic. The midfielder ran through midfield and then played a brilliant pass to striker Rudi Brunnenmeier, who gave 1860 the lead in the 13′ minute with a fabulous strike from 16 metres.

Ramón Grosso, however, equalised in the 21′ minute and in the 34′ minute José Veloso scored Real’s second of the night. Back in the 1960s, UEFA did not use an away goal rule as the tiebreaker and instead, a third game on neutral ground would have had to be played had the score remained at 2-1 for Real Madrid.

It would have been a scenario that would have likely benefitted die Löwen, but instead, it was up to goalkeeper Petar Radenković to become the tragic protagonist of what happened next. The Yugoslav keeper always walked a fine line between genius and madness and on this grand stage had a complete blackout in the 52′ minute allowing a harmless ball by Pirri to cross the line.

Real were now in complete control and never let the Lions back into the match and the 1860’s only ever European Cup campaign ended in tears on November 30, 1966.

Not that that was the end of the story, however. 1860 would not be 1860 if there was additional drama involved. Following the game head coach Max Merkel was criticised by several members of the executive committee, not all of them members of the football branch of the multi-sport organisation.

1860 Munich vs Real Madrid – a turning point for die Löwen

The executive committee criticised Merkel’s tactics and that the head coach had not consulted them before the match. Merkel was later quoted of having said: “Who do they think they are? Since when are bicycle shop owners and shoe salesmen in charge? Where were they when led the football club from the basement to the top? There was plenty of opportunities to help but not with their mouth but with actions. Now I am supposed to discuss tactics with them?”

The Austrian head coach Merkel was very much the father of the success at 1860. In charge since 1963 the native of Vienna had won the DFB Pokal with the club in 1964 and reached the final of the UEFA Cup Winners’ Cup in 1965 (0-2 against West Ham) before leading 1860 to their first ever championship in 1966 and as a result to the 1860 Munich vs Real Madrid matchup.

Merkel, however, led the club with a carrot and stick approach. A tough coach, not all players loved Merkel and Radenković, in particular, was often in open conflict with the head coach. 1860 Munich vs Real Madrid, is, therefore, also somewhat of a turning point for the club. Two weeks after the return leg Merkel was fired as the players openly revolted against the Austrian.

Peter Grosser and Petar Radenković at an event in 2004. The two won the championship with the club in 1966 and were main protagonists during the 1860 vs Real Madrid matchup (Photo by Sandra Behne/Bongarts/Getty Images)

President Adalbert Wetzel supported Merkel until the end and confronted with the player revolt ended up driving for hours throughout Munich trying to make a decision. In the end, Wetzel sided with the players and fired Merkel. It was a decision that led to a brief revival of the club as new head coach Gunter Baumann led 1860 back to the top of the standings and for some time it looked like the club could defend its championship.

But on matchday 32 1860 lost to 1.FC Nürnberg, which was now coached by Merkel and despite wins against Werder Bremen (4-2) and Eintracht Frankfurt (2-1) on matchday 33 and 34, it was Eintracht Braunschweig that would win the title in 1967 thanks to two more points in the standings. Nürnberg, under Merkel, would then win the title the following year and 1860 would never come close to winning the title again.

1860 Munich vs Real Madrid can, therefore, also be described as one of the many turning points in the history of the club. What would have happened if Merkel had won the return match and advanced to the next round of the European Cup? The Austrian was fired just two weeks following that game, and without a doubt, Wetzel’s decision would have been different had 1860 progressed.

Overall, it is one of the many moments that defines the ups and many downs in the history of the Lions. A club full of tragedy that always ready to stumble over its own legs when it matters the most.