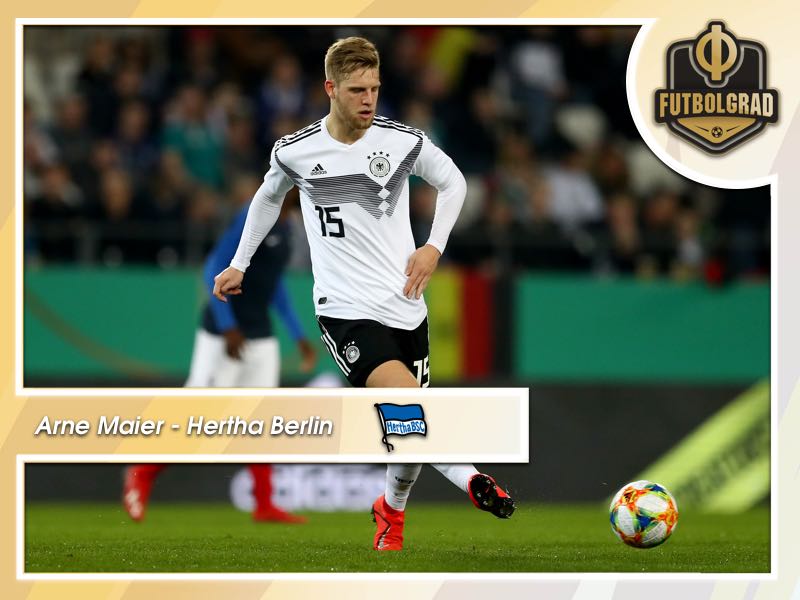 It was a fascinating match between England’s U-21 and Germany’s U-21 at the Vitality Stadium in Bournemouth. One player, who, in particular, stood out was Hertha midfielder, Arne Maier. That said, in this particular, game Maier did not play in midfield but rather the central role in a three-man defence.

Against England Maier once again was put in the defensive role. In fact, it is a position that has not been occupied since the days of Thomas Helmer and Lothar Matthäus as Arne Maier played almost like a libero in-between two natural centre-backs.

Playing between Timo Baumgartl and Felix Uduokhai Arne Maier was excellent in the 59 minutes he was on the pitch. Despite playing in a libero role Maier, however, was able to have an attacking contribution playing a wonderful assist to Mahmoud Dahoud ahead of Germany’s first goal.

Ultimately, he was, however, no longer on the field when Germany scored the winner through Felix Uduokhai in the 90′ minute but it was a good game for a player playing out of position.

Arne Maier, in fact, already occupied that role when Germany played France one week earlier. It was a bit of a new experience for the 20-year-old Hertha talent. But while it was not his best game, this season Maier still managed to adapt and fulfil the role that was given to him by U-21 head coach Stefan Kuntz.

In the match against France, Arne Maier managed to complete 92% of his 44 passes while also managing nine interceptions and four clearances. Not a bad night for a player playing out of position. “I am always open to trying something new, after all, I am still a young player,” Maier said after the game against France. 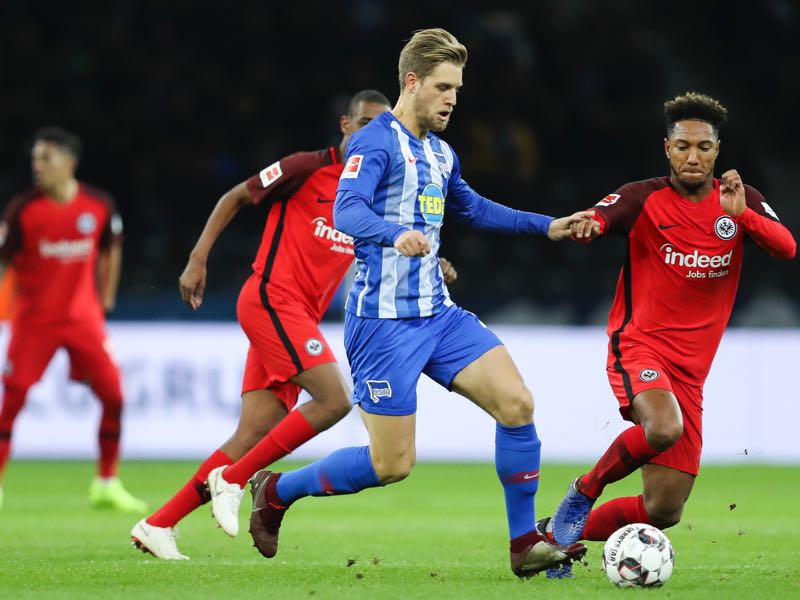 Arne Maier #23 of Hertha Berlin battles for possession with Jonathan de Guzman #6 of Eintracht Frankfurt during the Bundesliga match between Hertha BSC and Eintracht Frankfurt at Olympiastadion on December 8, 2018 in Berlin, Germany. (Photo by Maja Hitij/Bongarts/Getty Images)

The performance against France and England highlight what many in Berlin already know. Arne Maier is a versatile talent ready to shine on the big stage. But whether Hertha head coach Pal Dardai will repurpose Arne Maier as well remains to be seen.

“I think he knows what position is best for me,” Maier said after the France game to the German outlet Sportbuzzer. Nonetheless, “he was outstanding,” as Kuntz pointed out.

Playing for Hertha this season Arne Maier has made 23 appearances in the Bundesliga without recording an assist or a goal. But it is away from scoring opportunities that the 20-year-old is the most effective.

Often featuring in a central midfield role right next to Liverpool loanee Marko Grujić Maier has the more defensive role of the two. Playing almost like a quarterback the 20-year-old has completed 87.7% of his on average 47.37 passes this season.

To add to his numbers, Maier also wins 37% of his 14.93 duels per 90 minutes and also makes 4.66 interceptions per game. Also despite his defensive role, Arne Maier managed to make 5.09 passes per 90 minutes into the final third this season of which 82.3% reached their destination, which ranks him among the top 30 players in the Bundesliga.

At the same time Hertha head coach Pal Dardai wants to see more physical elements from his central midfielder and on March 11, in Hertha’s 2-1 defeat to Freiburg had to come off the bench. “Arne Maier did not play because he has been somewhat lacking in his man-marking. We wanted to defend high and press aggressively and, therefore, started players that are more aggressive in their man marking,” Dardai said after the game.

“Furthermore, it is good for his development, it will teach him to be more concentrated in his approach,” Dardai concluded. Dardai certainly got a reaction as Maier was excellent in the second half against Freiburg.

The 20-year-old then followed up that performance with two good games for Germany’s U-21. Hence, Arne Maier is not just a player that can quickly adapt but also is willing to learn from mistakes. Both are attributes that will help him develop into a player that can become a star in the Bundesliga and perhaps beyond.