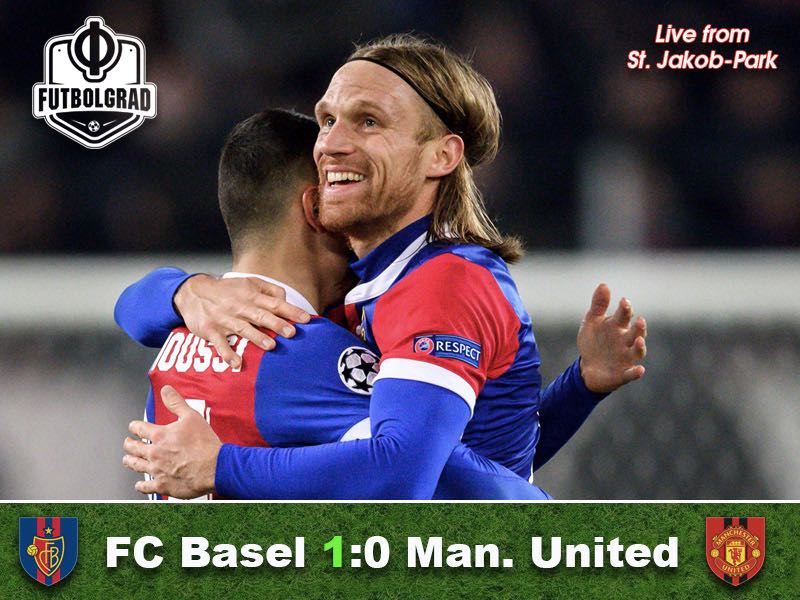 Basel v Manchester United was a match of two halves. The Red Devils dominated the first half and Basel the second where they got an unlikely winner late to keep Group A alive. 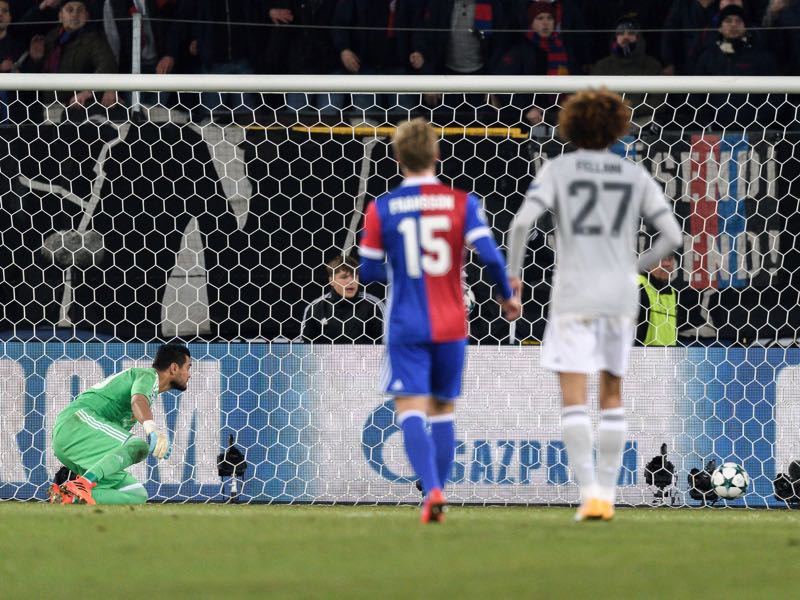 The match started with everything on the line for Basel. CSKA Moscow had won the parallel match against Benfica moving three points clear of the second spot in the UEFA Champions League Group A. It was, therefore, no surprise that Basel head coach Raphaël Wicky selected a rather aggressive 3-4-3 starting line-up against the English club.

The formation allowed Basel to sit deep and absorb pressure, but at the same time also quickly transition forward whenever Manchester United lost the ball in the attacking third. José Mourinho’s squad, however, stood compact and circulated the ball well in their end and had the first chances in the 11th minute when Romelu Lukaku broke through just to be stopped at the last minute by Basel keeper Tomas Vačlik. Moments later Marouane Fellaini had a close-range header cleared off the line by Eder Balanta and then in the 16th minute missed the target with another header this time after a Danny Blind free-kick cross.

30 minutes into the first half Manchester United had 74% ball possession. At this point, Basel was simply hanging on trying to come to terms with Manchester United’s tactical, technical and physical superiority. Just before the halftime tea, United hit the post after an Anthony Martial cross went straight through the entire defence and just about stayed out. One minute later Martial had the next chance when he went one-on-one against Vaclik. The FCB keeper did well, however, to keep his clean sheet.

Basel were lucky with the scoreline. United dominated the game, and it appeared at times that Basel were playing against a team newly assembled from Gold Gym members. The likes of Pogba Fellaini and Lukaku gave an impression that giants were playing against boys. The only advantage Basel had on the pitch was speed, but speedsters Mohamed Elyounoussi, Dimitri Oberlin and Renato Steffen were neutralised by a well-organised United defence that overlapped not to allow Basel’s player to come with speed at them.

Basel appeared to be much improved in the early moments of the second half, and Michael Lang just missed a low cross early on to bring Basel ahead. In the 50th minute, Basel had the next chance after Manchester United only half-heartedly cleared a free-kick situation right to Geoffroy Serey Dié’s feet and his shot from 18-yards out just sailed past the goal.

Basel much better utilised their speed in the second half and Dimitri Oberlin, whose deflection was stopped by Sergio Romero, and Renato Steffen curled effort inside the box missed the target within just a few moments in the 62nd minute. Mourinho reacted by adding more speed in Marcus Rashford, but also another solid stopgap in Nemanja Matić. Basel, however, kept up the pressure. Lang hit the crossbar in the 67th minute with a close-range header and Romero had to do well to stamp out the rebound.

At that point, Basel were the dominant team, and Oberlin should have gotten the first goal in the 71st but failed to get past Romero after a breakaway. Oberlin’s chance was enough for Mourinho. The Portuguese head coach reacted and brought on Zlatan Ibrahimović. Basel remained relentless, however, and Dié once again tested Romero from a distance in the 77th minute, and the Argentine keeper had to do well to stop the shot—Dié in the meantime got hurt from the shot and had to be taken off.

Dié’s injury could have been a turning point. The midfielder was the engine for Basel in the second half, yet Basel compensated his absence well. Basel never gave up and in the 89th minute, Michael Lang scored the, at this point, deserved goal tapping in a low cross at the far post. Manchester United then started pressing late, but the Red Devils could not turn the result around giving Basel a sensational victory.

It is hard to single out a single player in this one. Manchester United’s Anthony Martial carried the first half, but Serey Dié was the player of the second half. Michael Lang in the meantime provided the moment of the match with his late game-winning goal that means that CSKA Moscow and Basel will be battling it out for the second spot on matchday 6. 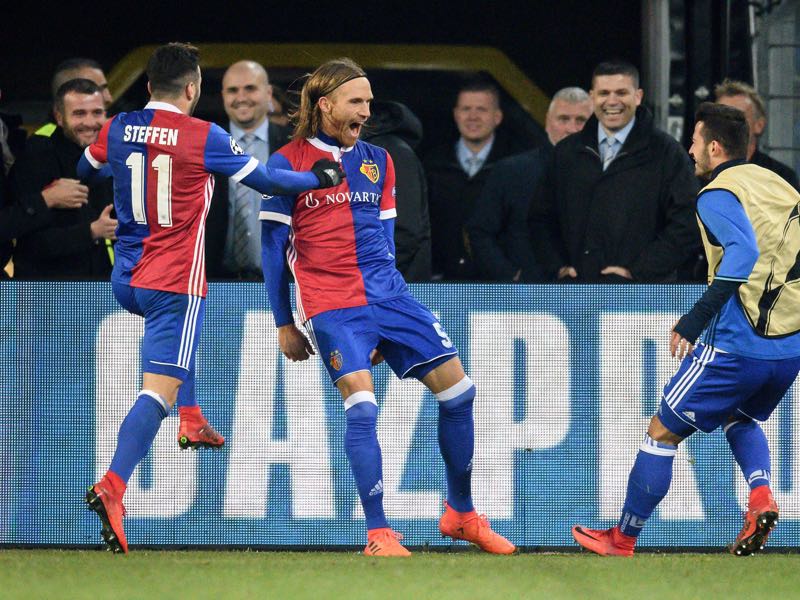 This was pretty much a must-win game for Basel after CSKA Moscow beat Benfica 2-0 earlier this evening. Basel seemed somewhat shocked by Moscow result in the first-half, and Manchester United threatened to over role the Swiss side. Basel then woke up in the second half and were the better team. Overall a draw would have been deserved, but Basel’s late pressure and work rate meant that the victory was not undeserved.

Jose Mourinho on the match: “Halftime it should be 5-0, we had a huge percentage of the ball. We faced the keeper twice. If you don’t score the opponents survive. If you survive such a dominancy, the opponents feel they can do it. In the end, I thought we would get the point. We had six to seven chances. We put ourselves in this situation. It is difficult in the second half to have the same amount of chances.”

Mourinho on the goal conceded: “Danny Blind was caught out, but it is hard to blame him.”

Mourinho on the lack of efficiency: “We played well in the first half. But we couldn’t score. We had several chances, and after 75 minutes we may have felt one point is enough. But that is football.”

Mourinho reflecting on past results in Basel: “I lost here a few years ago with Chelsea. But in that game, we didn’t have a shot on goal. Today we were perfect, but we didn’t score.”

Raphaël Wicky thoughts on the first half: “We knew we gave away to many chances. We tried to correct that, but we didn’t get loud. It was very difficult With a little less luck we would lose this game heavily. We were better in the second half and we had a great keeper. You need a perfect evening and we had exactly that.”

Wicky about Basel’s strength at home: “I don’t know why we always do well at home against English teams. I can’t answer what happened in the past I was only an expert back then on television. You just need a perfect night. Also, the Moscow result meant that we would be in Europe anyway. We could only win tonight.”

Wicky on the second half: “The positive was that it was still 0-0. We didn’t do anything special at halftime though. Just a small corrections. I can’t say whether we felt something going wrong with Manchester. I don’t want to talk about the opponent.”

Wicky on Serey Dié: “He was excellent. I just hope his thigh didn’t get damaged to much.”