Bayern dominated the early goings of the match and had the first chances of the game with Timothy Tillman (12′), and Milos Pantović (15′) had the first chances of the game for Bayern. 1860, in turn, struggled to get out of their half and in the 19th minute, Bayern took the lead after Felix Götze played a pinpoint cross to Kwasi Okyere Wriedt and the Ghanaian was at first stopped by 1860 keeper Marco Hiller but then managed to convert his rebound.

1860 were struggling to get out of their half. The Bayern Amateure were dominant in every regard and in the 31st minute Fabian Benko went one-on-one with Hiller after slaloming through 1860’s defence, but the keeper stayed calm and kept the ball out. It took 1860 until the 35th minute to finally create a chance.

Kodjovi Koussou received a long ball at the edge of the box and then spotted Nicolas Andermatt whose shot from 16-yards was stopped with a great diving save by Christian Früchtl. In the 40th 1860 had the next chance. Instead, it was Bayern who scored the second goal in the 44th minute. Adrian Fein crossed the ball into the box where Hiller stopped Wriedt’s header, but Raphael Obermair easily converted the rebound.

Die Löwen continued to struggle to find a way through and get back into the match.

Slowly, but surely, 1860 fought their way back into the match and in the 66th minute halved Bayern’s lead. 1860 were awarded a free-kick 30-yards out and brought in by Daniel Wein the ball flippered around in the box and ended up back with Wein outside the penalty box whose shot from 22-yards beat Bayern keeper Früchtl to make it 2-1.

The goal got 1860 back into the match and although Bayern continued to have the majority of the possession die Löwen were now more aggressive and were seeking their chance to tie up the game. As a result, Bayern now had the room to counter, and in the 88th minute, Frank Evina broke forward and played the ball to Derrick Köhn whose shot from 18-yards beat 1860 keeper Hiller.

Kwasi Okyere Wriedt was the Futbolgrad Network player of the match. The 23-year-old striker scored the opener and also created the second goal for Bayern. 1860 never fully controlled the Ghanaian striker who was without the doubt the difference maker that afternoon at the Grünwalder Stadion. 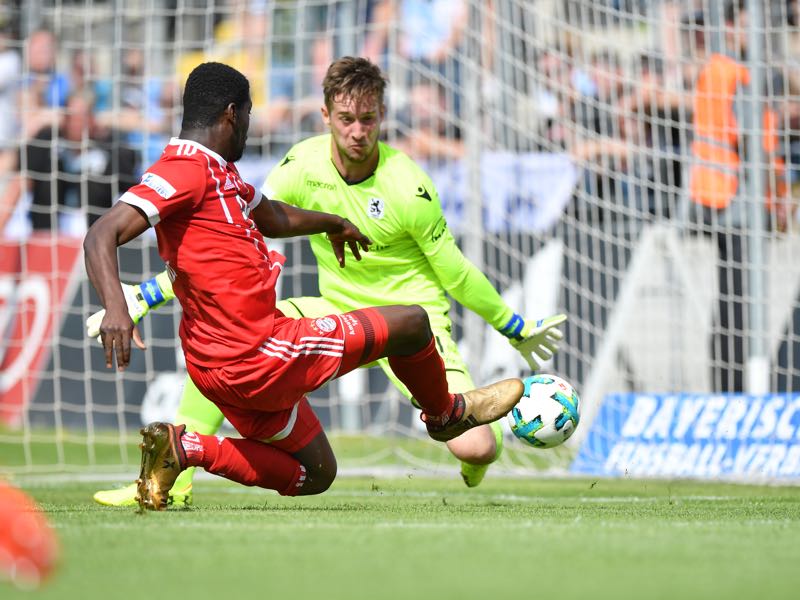 1860 München head coach Daniel Bierofka still has some work to do ahead of the relegation playoffs. Although the championship is not 100% secured, 1860 need one point from the last two matches to wrap up the title. They will then meet 1.FC Saarbrücken in the promotion playoffs to Liga 3. Die Löwen gave away the match against Bayern in the first 45 minutes, and a similar performance against Saarbrücken would inevitably end in a disaster.