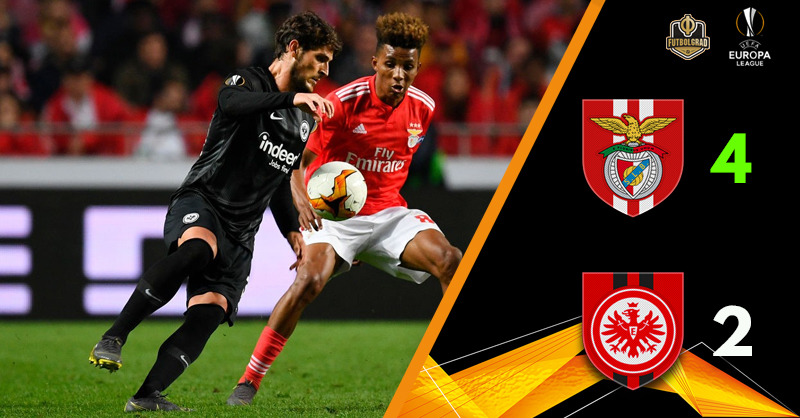 Benfica with the advantage after beating ten-man Eintracht Frankfurt

Benfica v Eintracht Frankfurt promised to be an evenly matched affair between the Eagles from Portugal and the Eagles from Germany and the match delivered. The game had everything, a red card, goalscoring heroics and six goals between the two clubs, as well as a result that still leaves the tie in balance.

The opening five minutes belonged to Frankfurt. Benfica loanee Luka Jović, in particular, pressed his former side hard and Frankfurt created three good chances during the opening stage of the game.

It took Benfica about 12 minutes to get a grip of Frankfurt’s high press. Slowly untangling themselves from the web that Frankfurt had spun around Benfica’s defensive third the Portuguese started to become more adventurous.

Benfica did not have much room to attack but the experience was showing. In the 21′ minute Benfica hit Frankfurt against the run of play. Joao Felix stuck a ball through to Gedson, who was brought down by Evan N’Dicka inside the box, the French defender was sent off and Joao Felix stepped up to convert the penalty.

For Frankfurt, this was a worst-case scenario. Not only a goal down they were also a man down as English referee Anthony Taylor judged N’Dicka to be the last man.

The German’s now had a mountain to climb. But tactically, they adjusted well to being down a man; Frankfurt now set a bit deeper trying quickly play the ball forward when winning possession and in the 41′ they found the deserved equaliser. Sebastian Rode won the ball at the halfway line; Ante Rebić overran Benfica’s defence played the ball to the centre where Jović hammered the ball home.

Benfica, however, right away struck back. Once again it was the teenage sensation, Joao Felix. In the 43′ minute the forward won the ball in the attacking third raced to the centre of the park and beat Kevin Trapp with a low drive from 24-yards out. Benfica now were pressing to double the lead and Franco Cervi had a double chance just before halftime to double the lead.

Just before halftime Frankfurt once again appeared to have scored the equaliser. A shot from Filip Kostić from outside the box found its way through, with keeper Odysseas Vlachodimos making the final touch. Danny da Costa was in passive offside but did not touch the ball, Taylor nonetheless waved the goal off.

The breathless pace of the match continued into the second half with Rafa Silva hitting the far post of the Frankfurt goal in the 48′ minute. Neither side looked to slow this game down with Benfica trying to take advantage of being a man up and in the 50′ minute did exactly that, with Ruben Dias scoring a header after a corner.

It now all fell apart for Eintracht Frankfurt. The Eagles, with one man down, were simply pressing to high up the pitch allowing Benfica to much room to counter and in the 55′ minute Joao Felix scored his third of the game after a brilliant counter-attack slotting a ball through Trapp’s legs.

Frankfurt head coach Adi Hütter finally adjusted his side. In an attempt to shut shop he brought on Jonathan de Guzman for Jović. Benfica remained dangerous, and in the 70′ minute, former Frankfurt forward Haris Seferović was through on goal but Trapp did well this time steering the ball wide.

Instead, just moments later, Frankfurt got one back. Goncalo Paciencia brought on for Rebić just a few minutes earlier, scored with a looping header from 11 metres out following a Kostić corner. That goal was like a lifeline for Frankfurt not just in this game but in the entire tie.

Somehow Frankfurt finally managed to shut this game down and although they lost this 4-2 given the way the night seemed to unfold at one point the Germans will take this result. Because overall there is still much to play for in the second match.

Joao Felix was the man of the match. The 19-year-old super talent was one of two players identified by the Futbolgrad Network to watch ahead of the match. Scouted by half of Europe the young star did not disappoint scoring three goals in the first 55 minutes including a wonderful goal from 20-yards out that brought Benfica back in front after Frankfurt had briefly equalised. 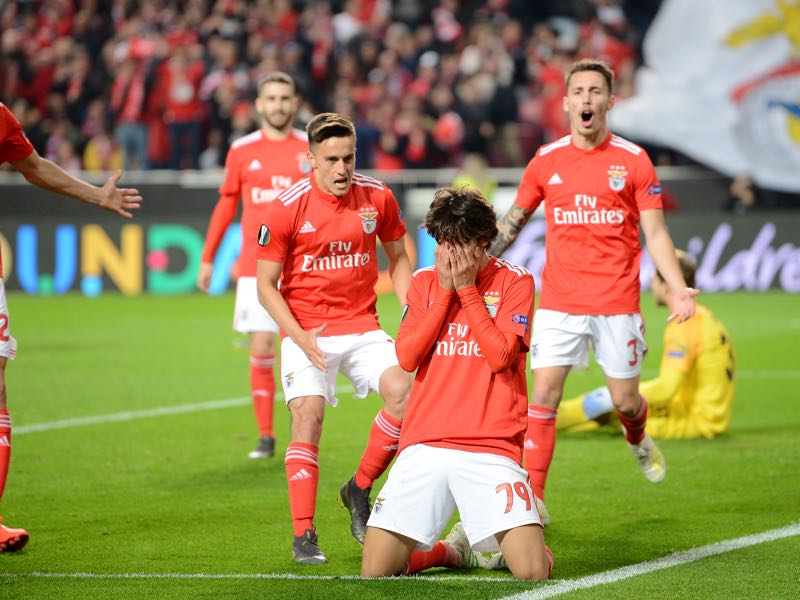 Eintracht Frankfurt just cannot help themselves. The Eagles are build on playing all-out attacking football and even when a man down kept pressing high trying to overwhelm Benfica with strength in numbers. But with a man down Frankfurt left to many gaps open in their defensive third and Benfica were clinical when it came to capitalising on their chances. Only after the fourth goal did Hütter finally close shop and Paciencia’s goal gives Frankfurt some realistic hope to advance in the second leg.