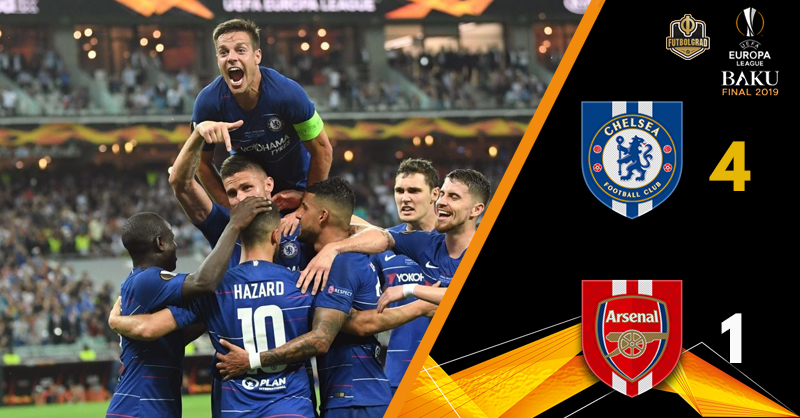 Olivier Giroud and Eden Hazard tore Arsenal to shreds in a blistering second-half spell that saw both score and assist each other. Although Alex Iwobi struck a stunning volley to pull a goal back to 3-1, Hazard slammed home Giroud’s delightful chip to snuff out any hopes a comeback immediately.

Giroud broke the deadlock four minutes after half time with an angled header from Emerson’s whipped cross. As the World Cup winner slid to his knees, he refused to celebrate scoring against his old club, but by the end of the match, he was ecstatic. It took his experience, strength and agility to force the two sides apart in what had been a turgid affair up until that point.

For all the pomp and circumstance that Baku threw up into the night sky, there was a distinct lack of fireworks on the pitch. N’Golo Kanté had passed his late fitness test but barely touched the ball in the opening 20 minutes. When he did, his passes strayed away from their intended targets more than usual.

It took until nine minutes for the first real opening, and the bright Ainsley Maitland-Niles was central. His neat backheel had released some early pressure from Mateo Kovacic, and this time his energy put him through behind David Luiz. His drilled cross was punched clear by Kepa Arrizabalaga.

His adventure was also rather harshly the cause of Chelsea’s second goal, however. A darting run out of defence was abruptly brought to an end by a trip, but the referee waved play on. Eden Hazard was able to capitalise on the extra space left to square a cross to Pedro, who finished neatly into the far right corner.

Pedro’s lacklustre first-half performance slid away as he darted across the edge of the box five minutes later. Skipping past Chelsea challenges he found Hazard lurking ominously, and the Belgian was brought down by a clumsy challenge. Up he stepped in what could be his last appearance in Chelsea shirt to calmly send Cech the wrong way.

Europa League specialist Unai Emery made a double change to try and drag his side out of a dreadful spell. Up until this point, they hadn’t managed a single shot on goal. Alex Iwobi was sent on for Lucas Torrerira, who had battled valiantly but in vain to cling onto Hazard, and within two minutes his spectacular volley from outside the box left Kepa helpless.

Any hopes of his side recovering were instantly wiped out by yet more incision from Hazard. His driving run had Arsenal’s defenders backpedalling, and although his through-ball to Giroud left the Frenchman with room to shoot himself, his selfless chip back found the Real Madrid target for a simple finish.

Despite the devastating spell in the second half, Chelsea hadn’t had everything their own way. Kepa’s desperate lunge was within millimetres of bringing down Alexandre Lacazette illegally, while Maitland-Niles had been quietly impressive on the flank. Using old-fashioned technique with a modern twist, one particular drop of the shoulder wouldn’t have looked out place in a Stanley Matthews shirt.

Halfway through a drab first half, he had taken the most touches on the ball out of Arsenal’s players. Premier League top goalscorer Pierre Emerick Aubameyang, by contrast, had taken just six. The Gabonese forward soon carved open the static Chelsea defence. A stepover did for David Luiz, and his driven cross only just evaded Alexandre Lacazette’s forehead. Moments later Granit Xhaka unleashed a vicious long-range effort that grazed the bar from 30 yards.

Jorginho slipped a cheeky flick through to Emerson into the box, and the Brazilian-born fullback – suddenly open in acres of space – lashed a shot straight at Cech who could only block the shot away. Once again, it was Maitland-Niles who swept up the recycled pressure.

With half time fast approaching, a neat interchange of touches on the edge of the box released Olivier Giroud. His left-footed effort sent Cech sprawling at full stretch down low to his left and forced a corner. The Czech keeper had been by far the busier of the two.

Ultimately, the pressure told as a brief flurry of missed chances from Arsenal couldn’t change matters. Aubameyang missed a glorious chance from six yards in the closing moments as Luiz’s desperate goal-line clearance denied him. Youngster Joe Willock then curled an effort inches wide when free in space. As Hazard left the pitch in the last minute of normal time, he did so knowing he’d wrapped up the trophy through his utter genius.

Eden Hazard may well be leaving Stamford Bridge this summer, but his work rate could not be faulted in a typically otherworldly performance. Even when not creating clear-cut chances, his ball-carrying relieved pressure on his tireless midfield teammates. After the break, his ceaseless running carved open chances for Giroud, and he left the pitch with two goals of his own. 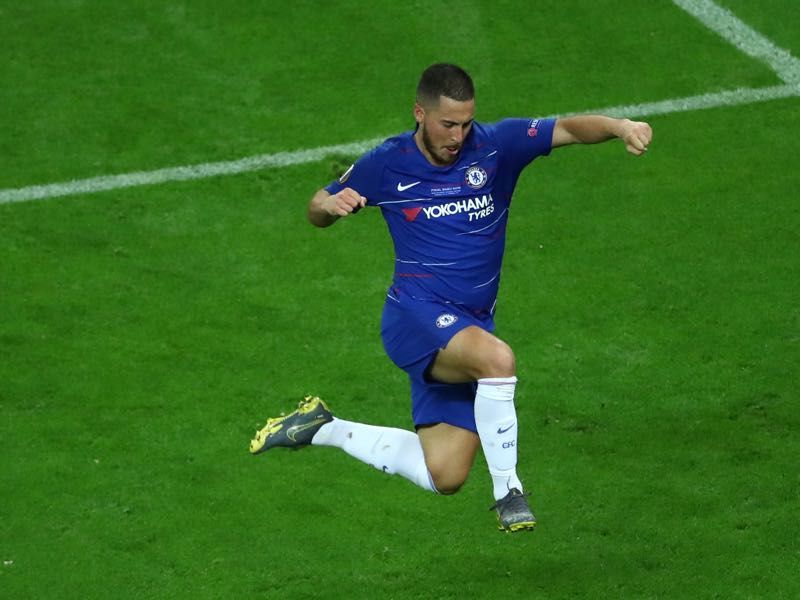 Chelsea v Arsenal – Eden Hazard of Chelsea celebrates after scoring his team’s fourth goal during the UEFA Europa League Final between Chelsea and Arsenal at Baku Olimpiya Stadionu on May 29, 2019 in Baku, Azerbaijan. (Photo by Francois Nel/Getty Images)

Henrikh Mkhitaryan’s absence after he had elected not to travel amidst uncertainty over his personal safety had filled the pre-match debate, but in the end, it would hardly have made much difference. The awarding of Baku as a venue was controversial for other more visible reasons, however; vast patches of empty seats were painfully conspicuous as a reported 6,000 of the 12,000 total tickets reserved for fans of Arsenal and Chelsea remained unsold. As glorious a city as Baku undoubtedly is, the culmination of UEFA’s second tournament deserved a far more intense atmosphere.