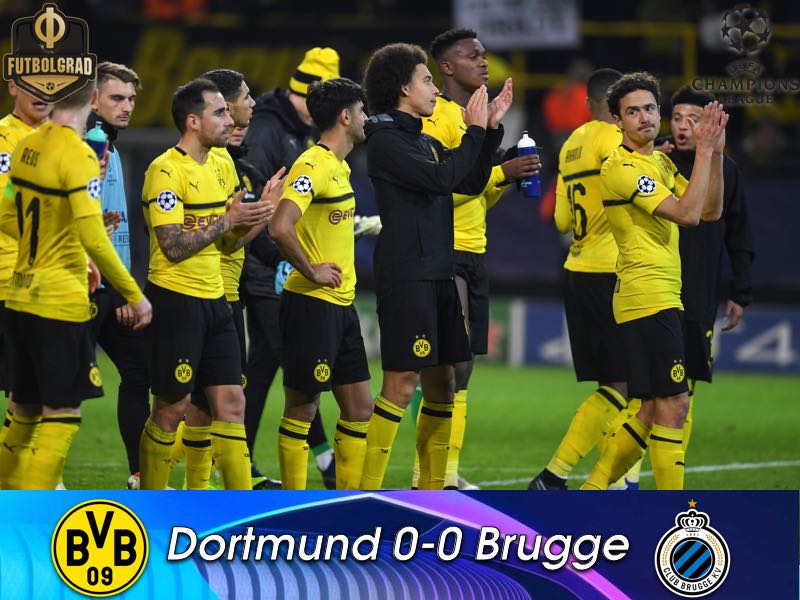 Hard working Brugge stop the BVB train in its tracks

Dortmund v Brugge was a match in which the Black and Yellows dominated every key stat with one exception, goals. Dortmund managed to play over 1000 passes throughout the match and had a pass completion rate of 93% but ultimately could not find a way past a well organised Brugge defence.

Only ten minutes had to pass until either side produced a chance. A long ball found Marco Reus inside the box, who laid the ball off to Christian Pulisic wide open and with only the keeper to beat his shot was not placed enough and kept out by Ethan Horvath.

That chance set the tone for the opening stage of the match. Dortmund controlled the match at will but at the same time struggled to get through a well organised Brugge defensive line. It took until the 31′ minute for Dortmund to produce the next chance. Marco Reus won the ball just outside Brugge’s box went one-v-one with Horvath and to the surprise of everyone inside Dortmund’s stadium ended up missing the target.

Dortmund were slowly but surely trying to tighten the noose around Brugge’s neck. Passing the ball around Brugge’s half, Dortmund had 74% ball possession and completed 92% of their passes. But what was lacking was the final ball into the attacking third that would finally undo the Brugge.

Hence, the Belgians were able to rescue a 0-0 draw into the second half. Once there Paco Alcacer had his first chance of the game, but his strike from 18-yards was well handled by Horvath. The noose was tightening, just one minute later Reus broke through on the left, and only a last-second intervention stopped Pulisic from scoring right at the doorstep.

After the early flurry of chances, the game returned to the previous pattern. Dortmund passed the ball around, and Brugge waited patiently with all 11 players around the box trying to look for that one counter.

In fact, it was Brugge that would come up with the next big chance of the game. In the 74′ minute, Wesley had won the ball deep in Dortmund’s half and muscling off Dan-Axel Zagadou he laid off the ball to Emmanuel Dennis, his shot, however, missed the target by just a few inches.

It was a remarkable match by Brugge, who kept a BVB side from scoring that had strung together around 900 passes around the 90-minute mark. But where it mattered Dortmund could not find a way through as the game ended in a bore 0-0 draw.

Hard to pick a man of the match in a game that saw very few highlights. In the end, Manuel Akanji gets the award. The BVB defender completed 96.4% of his 160 passes and won six of his seven duels. Although Dortmund failed to score Akanji’s solid play ensured that Brugge had almost no opportunities to hit the Black and Yellows on a counter-attack.

It is a big opportunity lost for Borussia Dortmund. The draw means Dortmund have effectively lost two points in their pursuit to finish first in Group A. Atlético managed to beat Monaco 2-0 earlier tonight, which in turn puts them two points ahead of Dortmund in the standings. Dortmund have won the head-to-head against Atlético and would go first should they manage to beat Monaco on matchday 6 and Brugge take points off the Spaniards as well.