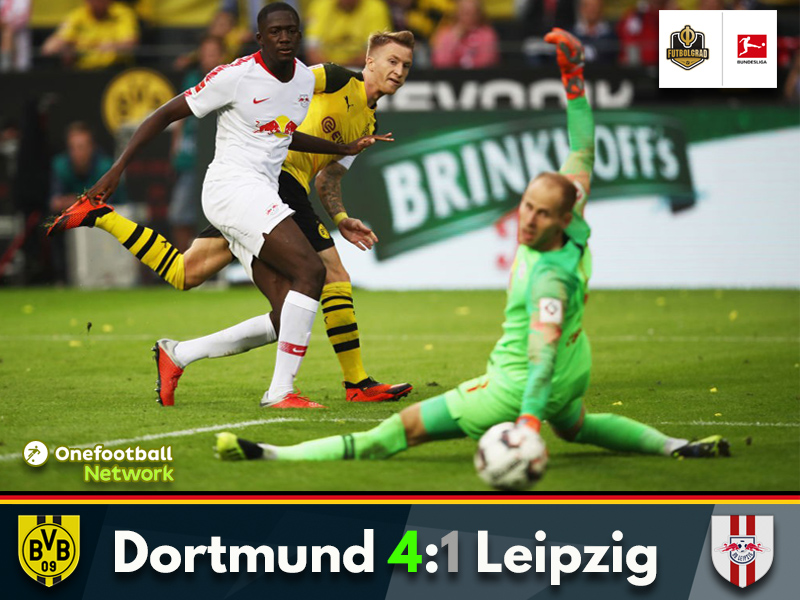 Dortmund v Leipzig got off to a fantastic start with Jean-Kevin Augustin scoring 30 seconds in, but Dortmund were the more efficient side turning the result around in front of a sold-out crowd at the SIGNAL IDUNA PARK.

The game was not even 30 seconds old when Leipzig took the lead. French forward Jean-Kevin Augustin broke through right off the kickoff and beat Roman Bürki to make it 1-0.

Leipzig looked the fitter team in the opening 20 minutes defending high in Dortmund’s half allowing the Yellow and Blacks little room to breath. It took Dortmund until the 22′ minute to break Leipzig’s embrace, and they did so with great damage. After a short period of pressure, Marcel Schmelzer received the ball on the left and played a hard curved cross into the box where Mahmoud Dahoud scored with an acrobatic header to make it 1-1.

Despite the goal, Leipzig remained in control tactically, and in the 27′ minute, Augustin should have had a second as Bürki came up big to deny the French forward. Bürki was then forced into another save in the 35′ minute when Emil Forsberg unleashed a shot from outside the box.

Leipzig created the chances but Dortmund the goals. In the 40′ minute the Yellow and Blacks had turned the result around after Marcel Sabitzer deflected a Marco Reus freekick into his own goal. Three minutes later Christian Pulisic wiped in a corner kick that found Thomas Delaney’s head, Peter Gulacsi made the initial stop, but new signing Axel Witsel sent the ball across the line with a wonderful overhead kick.

Leipzig, however, did not give up and in the 50′ minute Bürki had to be ready again when Lukas Klostermann tested the keeper with a volley from 16-yards out. Bürki showed both his strength and weaknesses – his fantastic saves were overshadowed by mistakes like the one he made in the 53′ minute after a Forsberg freekick where he dropped the ball after making the stop.

For the most part in the second half Dortmund, however, managed the scoreline well. Sitting deep the Yellow and Blacks tried to hit die Roten Bullen on the counter-attack.

As a result, the game flattened with neither team creating major chances in the final third of the game. Die Roten Bullen then created two chances in final five, but Bürki stopped Timo Werner one-on-one (83′) and then made a diving save after a Bruma shot (86′).

Instead, Dortmund scored with the final shot of the game. Abdou Diallo won the ball in his half played the ball to Jadon Sancho, who then stormed forward on the left and then played a low pass into the box where Reus was waiting to score his 100th Bundesliga goal.

Marco Reus not only scored his 100th Bundesliga goal but also created Sabitzer’s own goal with a free-kick cross. The captain was a strong presence on the field and terrorized Leipzig on the counter-attack. 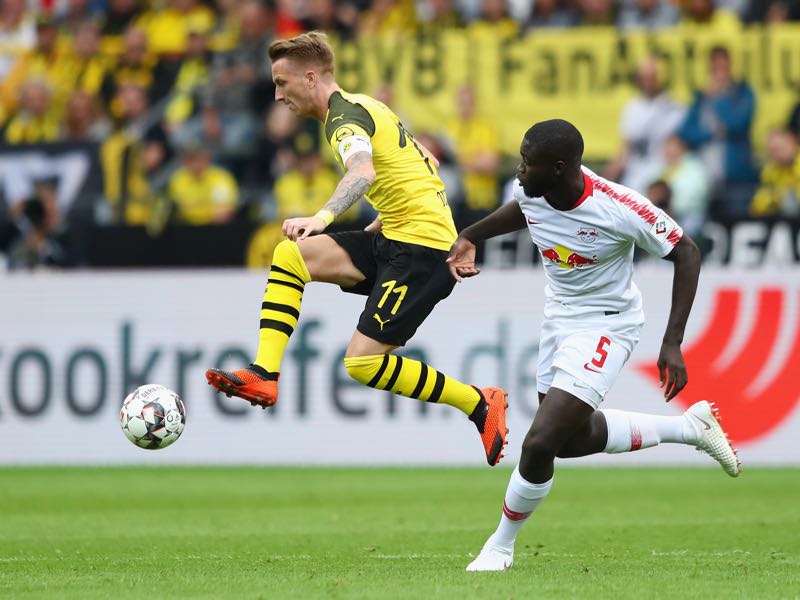 RB Leipzig came out storming out of the gate highlighting that they had played six competitive games in the Europa League and the DFB Pokal already. Dortmund, in the meantime, were sluggish, to begin with, but slowly got their legs going and Favre’s tactical setup worked well to break down Leipzig’s high press.

Loading...
Newer Post
Five things we learnt from Borussia Dortmund vs RB Leipzig
Older Post
Gladbach off to a flier as Leverkusen stutter in front of goal