Borussia Dortmund vs Union Berlin will take place at the SIGNAL IDUNA PARK in Dortmund. (Photo by Maja Hitij/Bongarts/Getty Images)

It is Berlin weeks in Dortmund. On Saturday Borussia Dortmund hosted Hertha Berlin, and the 2-2 draw was by many considered the first real setback under head coach Lucien Favre.

The Yellow and Blacks were excellent throughout the 90 minutes, but a last-minute mistake by young defender Dan-Axel Zagadou led to a late Hertha penalty and the equaliser by Salomon Kalou. Ahead of the Hertha game, the question was whether Dortmund could confirm their heroics performed against Atlético.

Despite the 2-2 draw and the two points lost, Dortmund can look at the Hertha game with plenty of optimism. The forward line, and Jadon Sancho, in particular, were excellent and perhaps the only negative was the efficiency in front of Hertha’s goal.

Hence, while the result was somewhat disappointing against an excellent side from the capital, the performance on the field was not. Furthermore, it could be argued that Dortmund dropping points has been coming and head coach Lucien Favre has urged the media and fans to give Dortmund time.

Time, however, is something Dortmund are not having a lot of these days. On Wednesday Hertha’s city rivals Union Berlin will be coming to town, and the third-placed team from Bundesliga 2 will provide an exciting challenge for Favre’s men.

Die Eisernen were held to a 0-0 draw by Dynamo Dresden on matchday 11 of the Bundesliga 2. That match, in particular, highlighted one of Union’s most significant problems at the moment: scoring goals.

Despite Dynamo Dresden having a man sent off Union could not find a way to get the ball in the net. It was the same problem one week earlier when die Eisernen were held to a 0-0 draw against Paderborn. Only goalkeeper Rafal Gikiewicz managed to score for Union Berlin in the last three matches.

“I am disappointed by the way we played. It was almost like the sending off blocked us mentally,” head coach Urs Fischer said after the Dynamo game. “When we play the same way against Dortmund, as we did against Dynamo, then it will become dangerous for us,” Fischer added.

Both teams are heading into this match still unbeaten this season. But with Dortmund looking to quickly extinguish any doubts that may have arisen after the Hertha match and Union struggling to score goals at the moment, there is very little doubt that Borussia Dortmund will leave the pitch as the winners on Wednesday night.

With Paco Alcacer still struggling with fitness, Lucien Favre has turned to Mario Götze to fill the void up front. Favre is not the first coach to experiment with Götze as a striker but he might become the first coach to be successful. Favre system has no room for a big classical number 9 and instead favours smaller more mobile players that can drop deep and can be involved in the combination play. At Gladbach Favre converted both Lars Stindl and Raffael into strikers and he might now do the same with Götze, who in the past has not been a fan of playing up front. “It depends on what role the striker plays in a system,” Götze told kicker on Monday. “If I am asked to wait in the penalty box and score headers then it will be difficult. But the way we are playing, I definitely think I can become used to the position.”

Union Berlin hope that striker Sebastian Andersson can end the club’s goalscoring problems. The Swedish striker was signed from 1.FC Kaiserslautern this summer and is the club’s top scorer with four goals in 11 games. But Andersson has failed to find the goal in the last three games, which coincides with Union’s overall toothlessness when it comes to scoring goals. The 27-year-old native of Ängelholm scored 12 goals in 30 games for relegated Kaiserslautern last season showing that he can be a good striker in Bundesliga 2. With his frame, an experience Andersson is now facing a relatively inexperienced backline, which in turn could be the perfect moment for the Swede to end the club’s goalscoring problems. 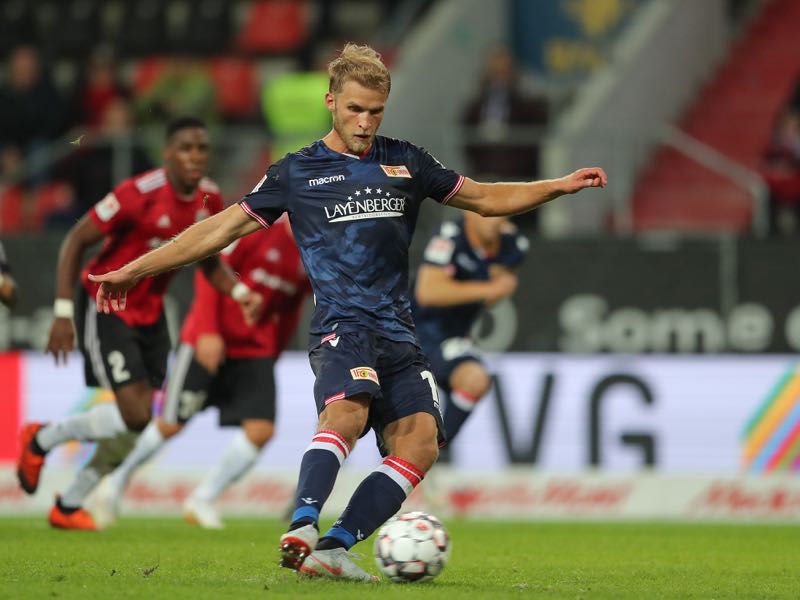 Sebastian Andersson of Berlin scores the opening goal from the penalty spot for Union Berlin during the Second Bundesliga match between FC Ingolstadt 04 and 1. FC Union Berlin at Audi Sportpark on October 1, 2018 in Ingolstadt, Germany. (Photo by Christian Kaspar-Bartke/Bongarts/Getty Images)