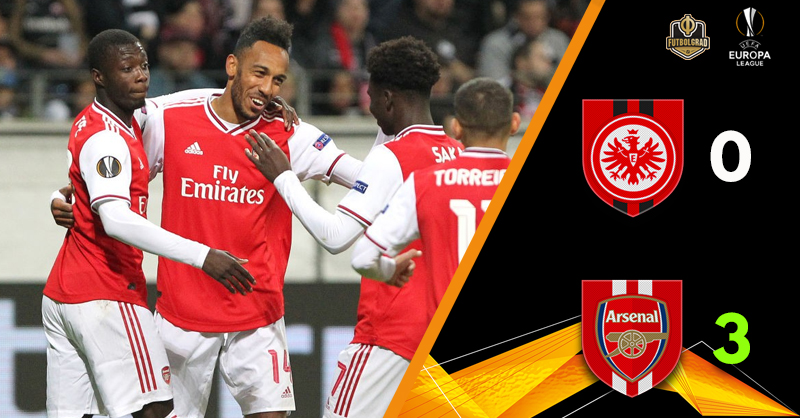 Last season’s beaten semi-finalists were comprehensively beaten by last season’s runners-up as Eintracht Frankfurt v Arsenal ended in a 3-0 victory for the English side.

Eintracht Frankfurt were given an early scare, Bukayo Saka’s cross finding Lucas Torreira unmarked at the back post who blazed over from close range. A bad turnover from Djibril Sow went unpunished and Kevin Trapp snuffed out a dangerous Gunners attack but the hosts soon gained control.

The Frankfurt pressure was mainly coming down their left edge with Filip Kostic the instigator. Kostic shot into the side netting after some nice combination play with Andre Silva, the Portuguese striker then having an attempt blocked and fellow forward Bas Dost shooting wide from a Kostic cross.

Pierre-Emerick Aubameyang wasn’t getting the warmest reception from the Frankfurt faithful, largely due to his frequent goals against them when plying his trade for Borussia Dortmund. He was clearly the classiest player on the pitch and saw a shot from distance sail wide.

Kostic was back in the action in the 23rd minute, his fierce shot forcing a save from Emiliano Martinez and minutes later Daichi Kamada forced another save from the Argentine shot-stopper. Danny da Costa and Martin Hinteregger both saw their shots blocked but Frankfurt were fortunate not to go behind.

Aubameyang’s cross picked out Joe Willock, the 20-year-old had a great chance to score but shot over from close range. Some great work from Granit Xhaka saw the Swiss midfielder release Smith-Rowe with Kevin Trapp making an important save.

Saka’s cross was cleared by Dominik Kohr with Aubameyang ready to strike, Bas Dost then heading a corner narrowly over the bar as neither side seemed able to score. Saka and Emile Smith-Rowe had switched flanks with Willock profiting from pushing up on David Abraham, it would soon turn into the opening goal in the 38th minute.

Saka got past David Abraham in Arsenal’s half, releasing Joe Willock who cut inside Makoto Hasebe and took a shot that deflected off Abraham Trapp giving no chance. Abraham’s nerves resulted in a turnover on the stroke of half-time, fortunately for the central defender Saka ran into heavy traffic and the chance was gone.

The opportunities kept coming in the second half, Dost unable to steer his header on target and Silva shooting over from a tight angle. Joe Willock went on a solo run, feeding Aubameyang with Hinteregger producing a vital block.

Granit Xhaka’s free-kick rebounded off the bar with Trapp stranded before one of Silva’s best chances of the match flew over the bar. Nicolas Pepe replaced Smith-Rowe in the 60th minute and immediately drew a foul from Kohr that earned the midfielder a booking.

Gonçalo Paciência replaced Bas Dost as Saka created a chance for Willock that was saved once again by Trapp. Kostic was desperate to get his side back in the game, flashing a shot across the face of goal in front of a Frankfurt home support that was doing everything possible to lift their side.

Paciência’s shot was saved, Silva’s header was straight at Martinez and one sensed this wasn’t going to be Frankfurt’s evening. Dani Ceballos came on for Joe Willock in the 72nd minute and Timothy Chandler replaced Danny da Costa not long after.

Bukayo Saka had been quiet but he was about to stamp his authority on the match. The youngster saw his shot saved and he then sent in a dangerous cross that was cleared by Kohr. The two players would meet again minutes later in a decisive confrontation.

Kohr stopped Saka streaking clear which resulted in a second yellow card and his marching orders. It was an uphill battle for the hosts with 10 men, Aubameyang somehow failing to put away Callum Chambers’ cross with a goal at his mercy.

Arsenal wouldn’t be denied however and it was Saka who put the result beyond doubt. Frankfurt failed to close him down outside the area, he took a touch and dispatched a left-footed effort past Trapp with pinpoint precision.

There was more to come, Saka robbing Abraham and releasing Aubameyang who made no mistake with Trapp a sitting duck. It was an incredible performance from Bukayo Saka, he stole the show on his competitive debut and looks a bright prospect. 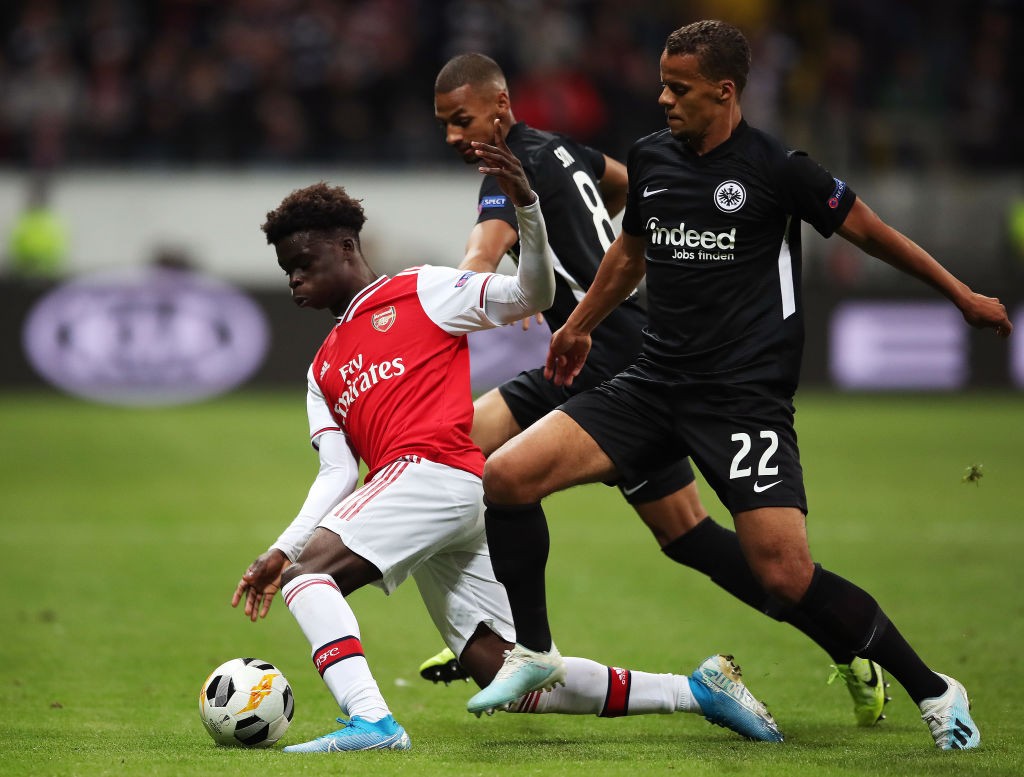 Bukayo Saka (Arsenal) The 18-year-old was a surprise starter but he took his opportunity and produced a man of the match performance. Instigated the attack that led to Joe Willock’s opener, scored the second with a classy finish from distance and set up Aubameyang for Arsenal’s third.

Joe Willock (Arsenal) Took a while to get to grips with the game, but the 20-year-old flourished after Emil Smith-Rowe and Saka switched flanks midway through the first half. His opening goal took a wicked deflection but he was an important player in midfield who provided a useful link to Arsenal’s attack.

Filip Kostic (Eintracht Frankfurt) Kostic was back to his best down Frankfurt’s left side and most of their chances came through the Serbian wing-back. Will be a vital player for the Eagles this season and has taken on more of a leadership role after the summer departures.