The Elftal and the Slow Decline of Generation Robben

Arjen Robben and the Netherlands got the job done. A 3-1 victory over Bulgaria on Sunday meant that the Elftal had preserved their minimum chance of reaching the 2018 FIFA World Cup in Russia next summer. The Dutch national team are currently third in Group A of UEFA World Cup qualifying three points behind second placed Sweden and four points behind first placed France.

The Netherlands, therefore, must win both of their remaining games in World Cup qualifying against Belarus and Sweden as well as hope that Sweden and France drop points in their remaining two games. Perhaps the Netherlands can draw some confidence from Sweden’s match against Luxembourg—after all the small BeNeLux nation took a point from France on Sunday.

Elftal – How did we get here?

How did we get here? Arjen Robben’s performance on matchday 8 against Bulgaria was exemplary for Oranje’s biggest problem. The Netherlands are to dependent on their very few remaining star players from what can now easily be called their last golden generation. 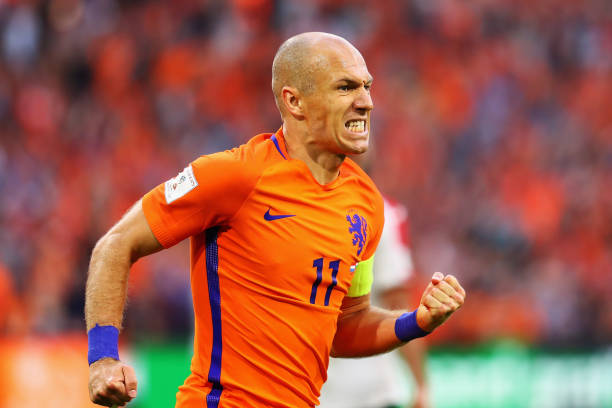 Arjen Robben is the last player of that golden generation that included the likes of Robin van Persie and Wesley Sneijder who is still at the top of his game. Both van Persie and Sneijder are still part of the squad. But neither player still has the power to stamp authority on the pitch.

Robben is different though. The right-winger is still one of the most dominant players on the planet when fully match fit. This is not just the case when playing for the Elftal, but also for Bayern München.

Playing for Bayern München last season Robben scored 13 goals and 11 assists in 26 Bundesliga games. Those are outstanding numbers for a winger who turned 33 this season. His numbers for the Elftal are similarly impressive in 94 games he has scored 34 goals and 29 assists. Against Bulgaria Robben added the invaluable second goal that would help the Netherlands secure the victory.

Robben – Injuries Slowed his Career Down at Times

Robben’s career numbers are indeed impressive, and they would have been even more spectacular had it not been for the many games the winger has missed with injuries throughout the ages.

Robben has recently pointed out that the many injuries have meant that he is still able to perform at a top level. At the same time, the question is how many more years on the top level does Robben have left in the tank?

An eventual retirement would be bad news for both Bayern and the Elftal. Bayern’s dependence on the top stars Arjen Robben and Frank Ribery has been discussed in the past on this page. But what about the Elftal? One of the biggest problems the Dutch are facing at the moment is the generation gap.

Robben’s generation represented the pinnacle of World football. The following generation represented by Quincy Promes, Daley Blind and Davey Pröpper, just to name a few do not play for the likes of Real Madrid, Barcelona or FC Bayern, but rather for Spartak Moscow, Manchester United and Brighton & Hove Albion and while there are players coming through the ranks—as Ajax’s run to the Europa League final demonstrated last season—there is a significant generation gap within the Elftal.

The Netherlands Will be Back!

The current crisis can, therefore, be explained by the fact that the Netherlands missed a golden generation right behind Generation Robben. This was bound to happen to a nation that only has a population of 17 million people. In fact this is not the first time in the history of the Netherlands that the country missed several tournaments in a row. In the 1980s the Dutch missed out on the 1982 World Cup the 1984 European Championships and the 1986 World Cup. 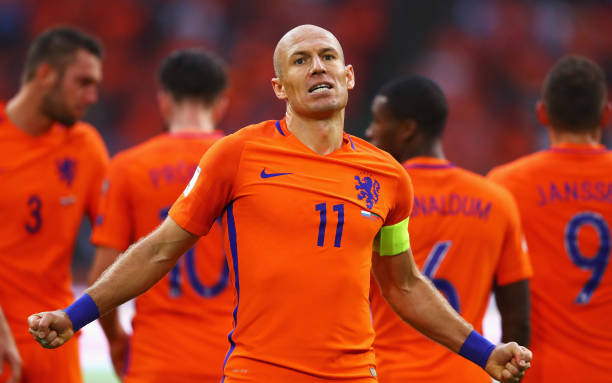 Robben and the generation gap. (Photo by Dean Mouhtaropoulos/Getty Images)

A World Cup final in 2010 and a spectacular run to third place in Brazil in 2014 was therefore the pinnacle of generation Robben. At the same time, there were already signs in Brazil that the side was too dependent on Arjen Robben. The winger was at his best, but the team suffered when the opposition could eliminate his forward runs, which is what happened during the semi-final against Argentina.

For now the Netherlands, like his club side Bayern München, are still dependent on Robben’s genius. Perhaps that will still be enough to fire the Elftal to Russia 2018. Either or the Netherlands just like Bayern will undergo a massive generation change in the coming years. For Robben fans, this means to enjoy his genius while it lasts. Oranje fans in the meantime should not worry too much. The past has shown that Netherlands will eventually create another generation that can dazzle the world.