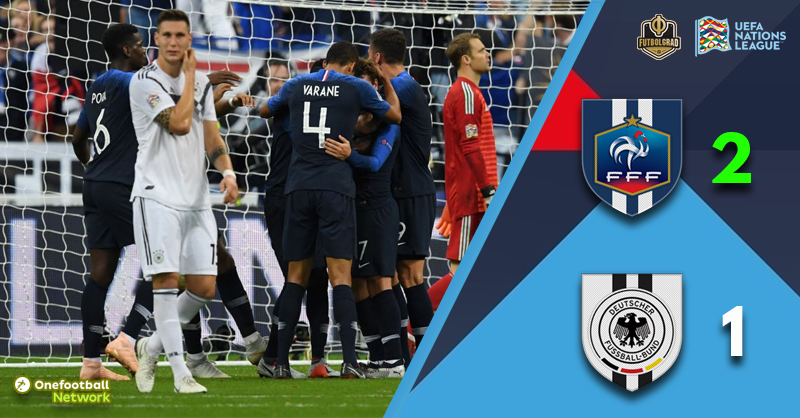 Germany face relegation after a 2-1 defeat to France

France v Germany saw the two last world champions face off against one another. But while France are on top of the world, Germany have hit rock bottom after another defeat.

Following the humiliating defeat to the Netherlands, Bundestrainer Joachim Löw made several significant changes. The formation was switched from 4-3-3 to 3-4-3, and young players Leroy Sané, Serge Gnabry, Thilo Kehrer, Niklas Süle and Nico Schulz were all brought into the side.

In what defensively looked like a 5-4-1 Germany tried to bolster their defence and in the opening phase looked to almost into coaxing the Equipe Tricolore into making mistakes. In the 13′ minute, Germany had their first quick attack with Sané quickly breaking forward after France lost the ball in Germany’s half, Presnel Kimpembe intercepted his low cross, but the French defender blocked the shot with his arm. Toni Kroos stepped up and converted the penalty.

Sané then could have doubled the score in the 20′ minute. Winning the ball at the edge of the box Joshua Kimmich send the Manchester City forward on his way but as Sané ran towards the France goal he opted to pass rather than going for goal himself but the pass to Timo Werner lacked accuracy and Lloris was able to intercept the ball.

Germany had further chances. In the 24′ minute Mats Hummels got on the end of a Kroos corner and managed to head the ball into the danger area, and only a quick reflex by Lloris stopped Matthias Ginter from scoring Germany’s second of the night. Ginter also had the next chance after he was left alone in the 36′ minute following a Germany corner, his header from eight yards out, however, was off the mark.

And France? Germany kept the Equipe Tricolore at bay for almost the entire first 45 minutes. The only significant chance for France arrived in the 40′ minute with Antoine Griezmann dishing a ball into the box that found a speeding Kylian Mbappé, the striker got his toe on the ball, but it was not enough to beat goalkeeper Manuel Neuer. Then just before the halftime tea Olivier Giroud missed the target from a few yards out after a low cross by Lucas Hernandez.

The second half started with France increasing the pressure. In the 51′ minute, Mbappé had the first chance of the interval. Beating Süle in a foot-race, the Paris Saint-Germain striker went one-on-one against Neuer, who like a Kraken stretched out and stopped the ball with his outstretched leg.

Die Nationalmannschaft, in the meantime, looked to counter. Just three minutes later, in the 54′ minute, Sané could have doubled the lead, but his shot from eight yards after a Schulz cross missed the mark. Germany were now looking to counter the French side but as a result, let themselves pressed too deep into their half.

Hence, France were now the more active team and in the 62′ minute scored the deserved equaliser. Hernandez was allowed to much space on the left, and his cross found Griezmann, whose unbelievable header from ten yards out beat Neuer.

How would Germany react? Die Nationalmannschaft would wake up from their brief slumber, and in the 67′ minute, Gnabry tested Lloris with a fantastic shot from the edge of the box. The game now became wide open with both sides looking for the second goal.

In the 79′ minute, France was given the golden opportunity to take the lead. Blaise Matuidi escaped defender Mats Hummels, the defender went down into a tackle, Matuidi stepping on Hummels’ foot tumbled, and the referee pointed to the spot. Griezmann stepped up and beat Neuer to make it 2-1.

It was a goal that shocked Germany. Die Nationalmannschaft then tried to equalise the score by pushing further forward but failed to produce a tangible chance until the final minute of the match. A Kroos freekick from the left was redirected by Benjamin Pavard and missed the goal by just a whisker. The defeat for Germany means that die Nationalmannschaft will be relegated from the UEFA Nations League A should they fail to beat the Netherlands in Gelsenkirchen in November.

Antoine Griezmann was the man of the match. The Atlético Madrid forward scored a fantastic header to equalise the score and then took the responsibility to step up to take the decisive penalty that won the match for France. With 26 goals, Antoine Griezmann is now the 10th top goalscorer in the history of the French national team (as much as Sylvain Wiltord). 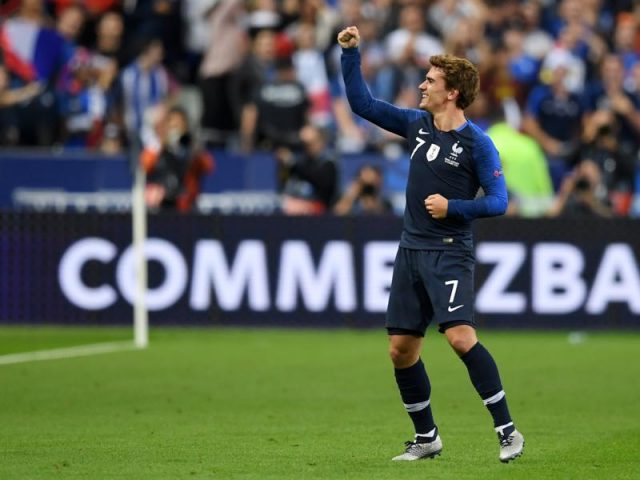 France v Germany – Antoine Griezmann of France celebrates after scoring his team’s first goal during the UEFA Nations League A group one match between France and Germany at Stade de France on October 16, 2018, in Paris, France. (Photo by Matthias Hangst/Bongarts/Getty Images)

Joachim Löw made significant changes ahead of the match. The result was a significant improvement by die Nationalmannschaft  over the game against the Netherland. Fact is that the fans are more likely to accept a defeat by world champions France with a new and improved side. The young players Kehrer, Sané, Gnabry and Werner, in particular, impressed by bringing more speed and athleticism to the side. At the same time, the rebuild needs to continue with some of the old guard needing to be slowly faced out.

Loading...
Newer Post
‘Löw rings the changes’ and ‘what now for the old guard?’ – 5 Talking Points as Germany fall short in France
Older Post
Julian Gressel – The story behind Gresselmania