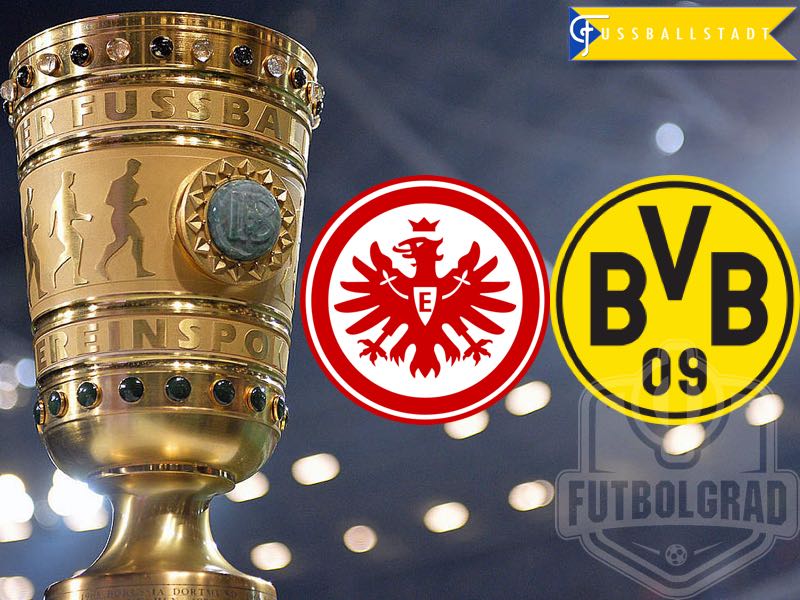 The Futbolgrad Network is in the Olympiastadion in Berlin to bring you our Frankfurt vs Dortmund DFB Pokal Liveblog.

A close fought affair ends with a tight 2-1 victory for Borussia Dortmund. Dortmund is the deserved cup winner but Frankfurt were an equal opponent and were perhaps unfortunate that Rebić’s shot hit the post. But overall Dortmund were the better of the two sides, and after scoring the second goal should have perhaps tried to finish Frankfurt off. It was obvious that Dortmund were somewhat nervous about possibly losing their fourth DFB Pokal final in a row and perhaps it was the nerves that let to Dortmund not finishing this match off earlier. Finally, it will be interesting to see how winning the cup will influence the relationship between Dortmund’s management and head coach Thomas Tuchel.

The last free-kick is easily cleared by Dortmund and referee Deniz Aytekin decides to end the match. Dortmund have won the cup after losing the last three finals. It is the fourth DFB Pokal victory for Borussia Dortmund.

Alex Meier with a chance but he fails to control the ball in the box and Dortmund can clear the ball.

Chance for Frankfurt! Blum with a hard pass into the six-yard box and Sokratis almost finishes the move off for Frankfurt. The ball, however, fails to hit the target and Dortmund continue to lead.

Frankfurt have the majority of possession now. Dortmund on the other side is waiting for counter attacks to finish the game off.

Big chance for Dortmund. Aubameyang escaped Frankfurt’s defence but is briefly stopped by Abraham. The Gabonese striker, however, wins back the ball and then manages a curled effort that beats Hradecky, but the ball hits the crossbar.

Frankfurt work hard here to get back into this match, but thus far Dortmund can withstand the pressure.

Free-kick chance for Dortmund Gonzalo Castro, however, with a poor attempt. By the way if you like what we do please support us on patreon. Click the link on the banner for more information:

Danny Blum comes on and sets up Alex Meier for a great chance, but a Dortmund defender can deflect Meier’s shot from 25 yards out.

Niko Kovac replaces Fabian with Danny Blum. A bit of a surprise move by Eintracht’s coach as Fabian has been one of the best players for Frankfurt.

Thomas Tuchel with his final change. Erik Durm replaces Marc Bartra. Dortmund will receive an extra substitution should Frankfurt manage to equalize and bring the match into extra time.

Chance for Frankfurt. Dortmund were more or less in control of the match when Seferović manages to collect the ball deep in Dortmund’s half and then attempts a shot from 20 yards. Bürki, however, can stop the shot. 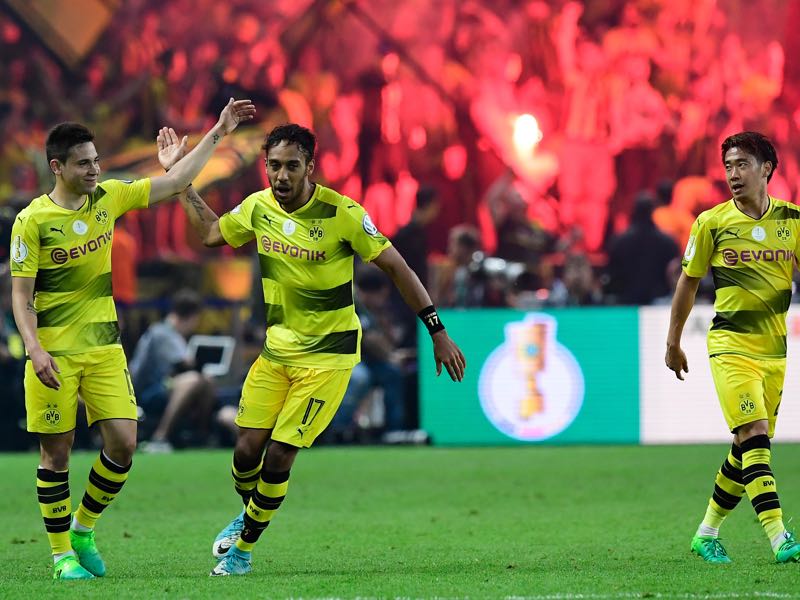 Pulisic beats Hradecky in the penalty box, but the Frankfurt keeper fouls the attacking midfielder. Deniz Aytekin has no choice penalty!

What a chance for Aubameyang! Dembélé shakes off three Frankfurt defenders and crosses the ball to the far side of the box where Aubameyang finishes the move with a bicycle kick, but his shot is cleared of the line by Marco Fabian.

Chance Dortmund. Piszczek with a low cross in the box, but Vallejo can clear the ball just ahead of Aubameyang.

Chaotic game now. Both sides are struggling to gain control over this match and it almost appears that the next goal could come out of nowhere.

Ten minutes into the second half and Dortmund are once again threatened to lose control over the match. Frankfurt are poised here and have taken the battle to Dortmund.

Time to take a look at some match stats:

Dortmund with the first big chance of the second half. Shinji Kagawa finds the space to break into the penalty box and David Abraham has to do well to clear the ball in the six yard box. Dortmund are in control here now.

Slight delay here as Frankfurt fans have burned down some fireworks in their half of the stadium. We are now back in action.

Dortmund were dominant in the opening moments of the match. Dembélé’s world class goal appeared to pave the way to an easy Borussia Dortmund victory. But Eintracht Frankfurt fought back and managed to equalize through Rebić. Dortmund failing to keep up the pressure means that 1-1 at halftime is a fair result. 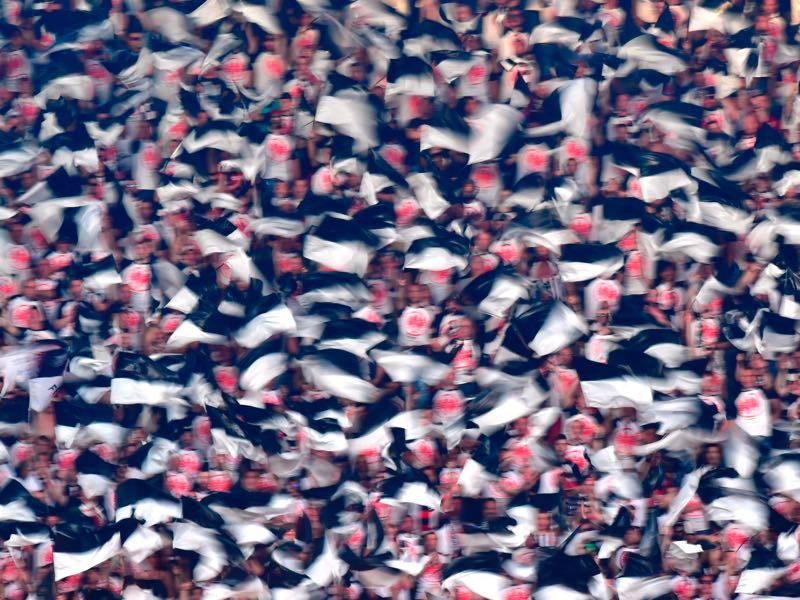 Eintracht fans are celebrating at the Olympiastadion. (JOHN MACDOUGALL/AFP/Getty Images)

Dortmund are struggling to control this match. It appears that Eintracht’s goal has caused a big shock for the yellow and black. 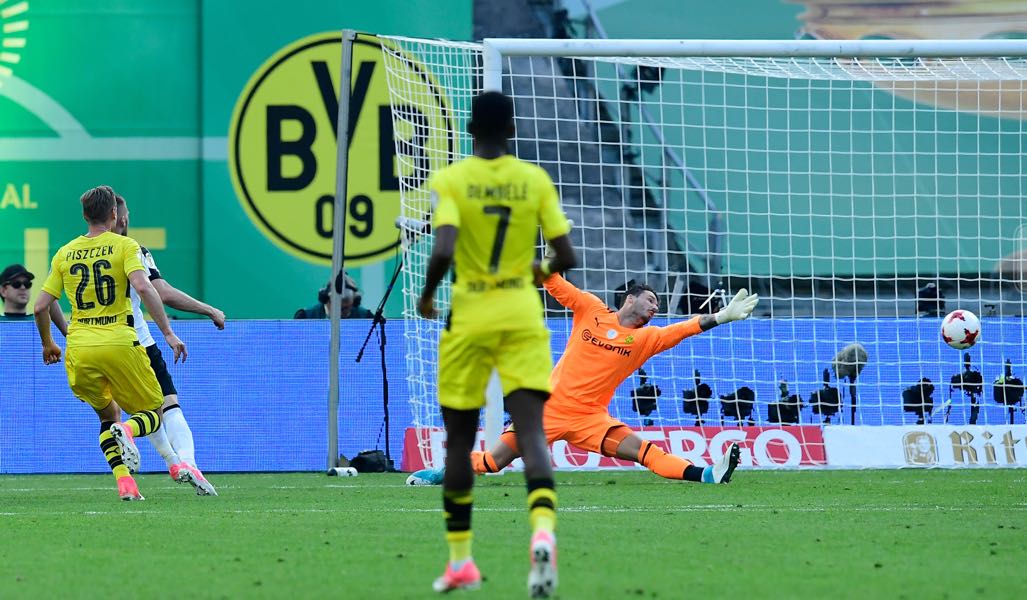 The moment that brought Frankfurt back into the match. (TOBIAS SCHWARZ/AFP/Getty Images)

Eintracht Frankfurt almost with the second goal! Seferović is able to muscle off two Dortmund defenders and then manages to beat Bürki with a great shot, but the ball hits the post.

Mijat Gaćinović with a brutal foul on Aubameyang. The Eintracht midfielder is shown a yellow card.

Marco Reus on the sideline for treatment. The attacking midfielder can continue the match.

Tight match now. Frankfurt have battled and are now back in this match. Dortmund in the meantime seem surprised that they have lost control over the match. 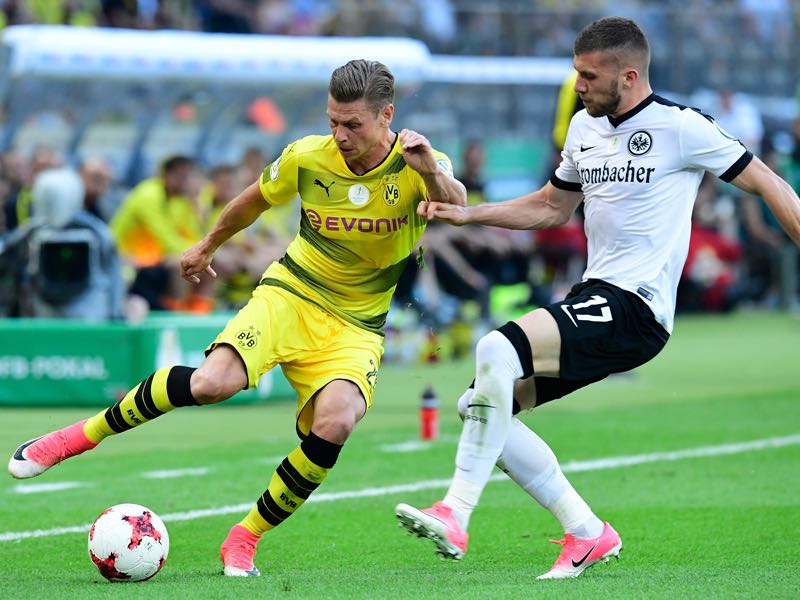 Frankfurt vs Dortmund – The DFB Pokal is a tight affair at the moment. (TOBIAS SCHWARZ/AFP/Getty Images)

Mijat Gaćinović wins the ball in midfield and finds Ante Rebić, who breaks through into the box and then calmly places the ball past Bürki.

Double chance for Frankfurt! Chandler breaks into the box and passes the ball across the penalty box, but Haris Seferović misses the ball. Rebić, however, can poach the ball from Marc Bartra, who fails to clear the ball, and Roman Bürki has to do well to stop his shot.

By the way Ousmane Dembélé’s goal was Borussia’s 250th goal since Thomas Tuchel became the coach of the black and yellow two years ago.

Marco Reus with a volley after a Dembélé corner-kick. But Eintracht keeper Lukas Hradecky can collect the ball.

Ante Rebić finds some room for Frankfurt on the left side of the pitch, but his pass into the box is calmly cleared by Sokratis.

Dortmund are now in control of the match. Frankfurt struggle to break through Dortmund’s well-organized defence.

Marco Reus switches the ball over to the right side where Łukasz Piszczek can collect the ball and send Dembélé into the box. Here Dembélé calmly steps past Jesús Vallejo and then curls the ball into the net. Spectacular goal!

Sokratis spots Reus, who once again finds the space to break into Frankfurt’s box where he spots Pierre-Emerick Aubameyang. The Gabonese striker, however, cannot control the ball and Frankfurt can clear the situation.

Dortmund right away dangerous! Marco Reus breaks through on the left side and brings the ball in the box, but a Frankfurt defender can clear the ball.

Eintracht Frankfurt are wearing black and white and Borussia Dortmund are kitted in their traditional yellow and black shirts. Dortmund have their fans behind them in the first half.

The Cup is here!

The former figure skating Olympic champion Katharina Witt is carrying the Cup today. Up next the national anthem.

The atmosphere in the Olympiastadion is electric.

And here is the lineup for Borussia Dortmund: