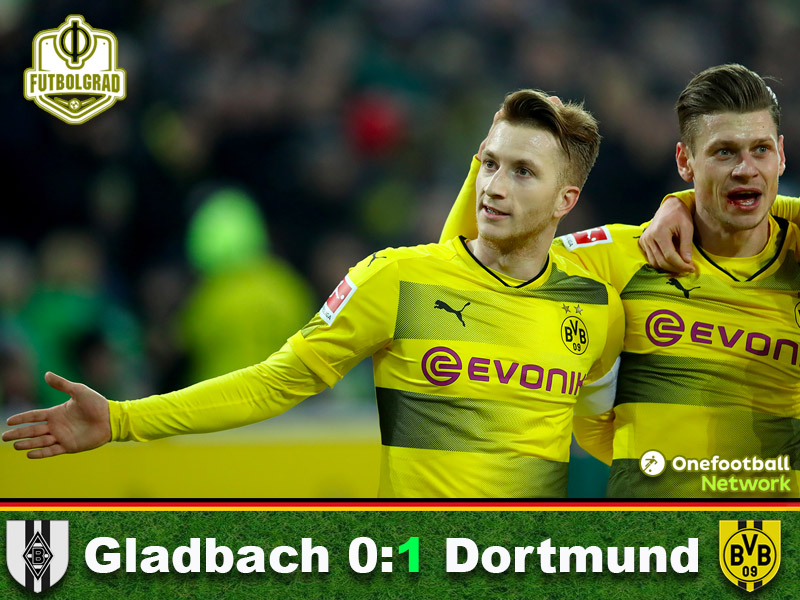 The Sunday night game Gladbach vs Dortmund should have been the highlight of the matchday; a churned up pitch, however, resulted in a mediocre game dominated by the Foals, but won by Dortmund thanks to a fantastic goal by Marco Reus.

The pitch was the big topic, to begin with—churned up both teams struggled to play technical football, and as a result, the game itself started somewhat choppy. A slip up produced the first chance of the game in the 13th minute with Julian Weigl struggling to cleanly challenge Lars Stindl at the edge of Dortmund’s box the ball fell back to the Gladbach forward, who let it fly from just inside the box, Roman Bürki had to make a fabulous stop and Manuel Akanji had to be quick to clean up the rebound. With the field in poor condition, both sets of players struggled to put together decent attacks. At one point Mario Götze had to change his footwear as he was slipping all over the field. Gladbach seemed to deal slightly better with the conditions than Dortmund—pressing high up the pitch they were waiting for technical mistakes in Dortmund’s buildup play.

It took Dortmund about 30 minutes to adjust to the conditions. The Yellow and Blacks started to keep the ball off the ground springing forward their attacking line by playing long balls from the back, and that is precisely how Dortmund would make it on the scoreboard. Mario Götze released a long ball from deep in Gladbach’s half that found André Schürrle on the edge of Gladbach’s box, the winger then played a great cross across to Marco Reus, who released a shot that seemed to defy physics dropping at just the right moment to hit the underside of the bar to make it 1-0 for Dortmund in the 31st minute. The goal opened up the match a bit more with Gladbach causing the next highlight of the match after Jannik Vestergaard seemed to have scored the equaliser in the 45th minute after a Thorgan Hazard freekick that bounced around the penalty box and then eventually ended up right at the feet of the tall Danish defender, who slotted the ball home. VAR, however, then showed that he was offside on three occasions during the entire play and the goal was rightfully taken back by referee Bastian Dankert. 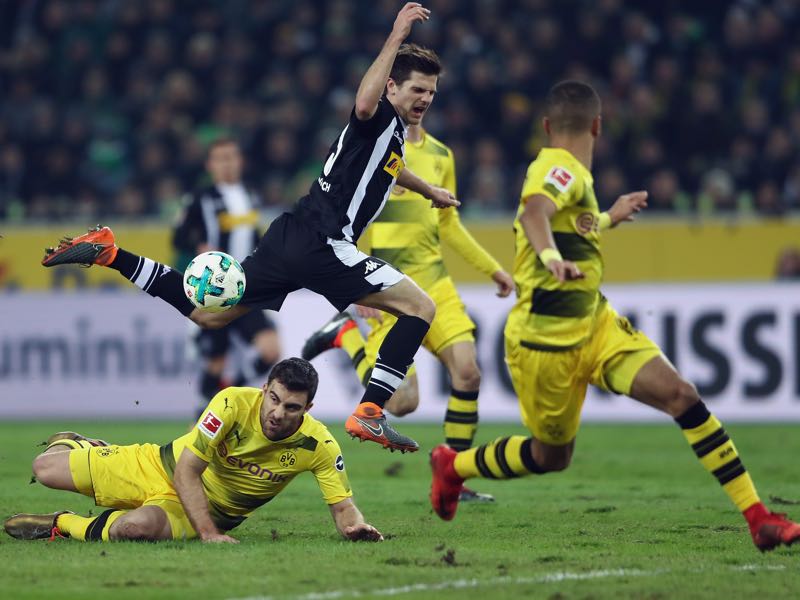 Both sides have plenty of technical skills, but the pitch conditions meant that it became a football battle rather than a football fest. (Photo by Alex Grimm/Bongarts/Getty Images)

A goal down Borussia Mönchengladbach put on the pressure right from the start, and in the 55th minute, Gladbach almost had the equaliser. Surrounded by three BVB defenders Lars Stindl let one fly from outside the box, Bürki had to stretch himself to get a hand on the ball and then scramble to stop the rebound in two back-to-back situations. Gladbach was getting close to the equaliser, and only an excellent Bürki was keeping Dortmund ahead. Dortmund seemed to struggle to keep Gladbach at times, but at the same time it was the Yellow and Blacks that should have been up by two on the 60th minute when the ball landed at Reus’ feet after a corner, and the national team winger volleyed the ball on net with Yann Sommer just about managing to keep the shot out of the net.

Gladbach kept on coming and had chances to equalise with Stindl hitting the ball right to Bürki in the 65th minute, Nico Elvedi with a clear-cut header in the 70th minute and Raul Bobadilla with a shot inside the box in the 76th minute could not beat Bürki. At this point, Gladbach highlighted why they have been unable to score a goal, for now, four matches in a row. With that, the minutes kept ticking away with Gladbach pressing hard to get the equaliser to at least salvage one point from the game. But the football gods were united against Gladbach it appears as the referees, both on the pitch and in the vault in Cologne, missed a clear handball situation by Michy Batshuayi, who up to that point was invisible for Dortmund. The missed penalty situation added to a miserable night for the Foals, who despite being the better team could not score to save their lives.

Gladbach vs Dortmund – Man of the Match

Roman Bürki was outstanding in Borussia Dortmund’s goal. Facing national team rival Yann Sommer Bürki made a clear case that he should be the starting keeper next summer in Russia over the Gladbach keeper. The Foals outshot Dortmund 26 to seven with eleven shots on target. Bürki, however, handled every shot going his way and won his side the three points that afternoon. 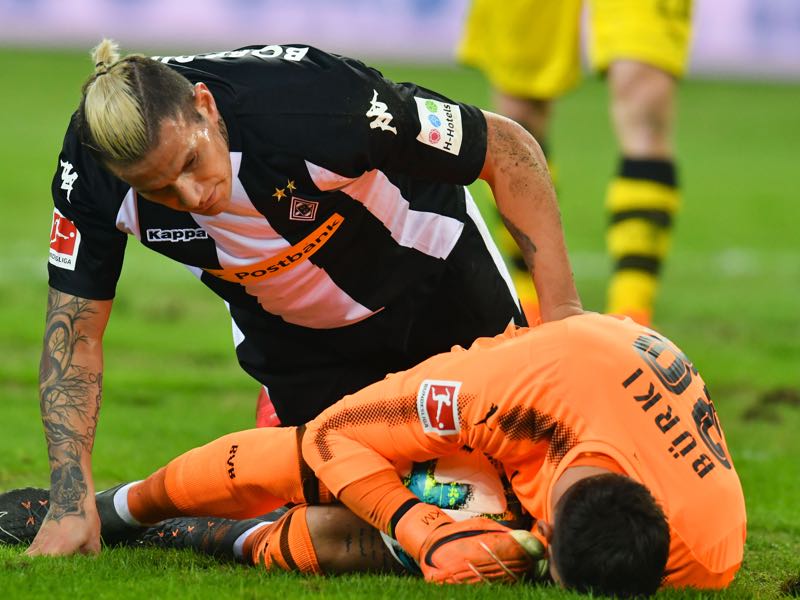 Borussia Mönchengladbach cannot score at the moment. Now without a goal in four games, the Foals outplayed and outshot Borussia Dortmund, but were unable to get past Roman Bürki. A case can be made that the Dortmund keeper was outstanding, at the same time. However, Gladbach’s goalscoring problems seem endemic at the moment as the side lacks a clear goalscorer.

Manuel Veth is the owner and Editor in Chief of the Futbolgrad Network. He also works as a freelance journalist and social media editor at Bundesliga.com. He holds a Doctorate of Philosophy in History from King’s College London, and his thesis is titled: “Selling the People’s Game: Football’s transition from Communism to Capitalism in the Soviet Union and its Successor States,” which will be available in print soon. Originally from Munich, Manuel has lived in Amsterdam, Kyiv, Moscow, Tbilisi, London, and currently is located in Victoria BC, Canada.  Follow Manuel on Twitter @ManuelVeth. Or contact him manuelveth@futbolgrad.com.