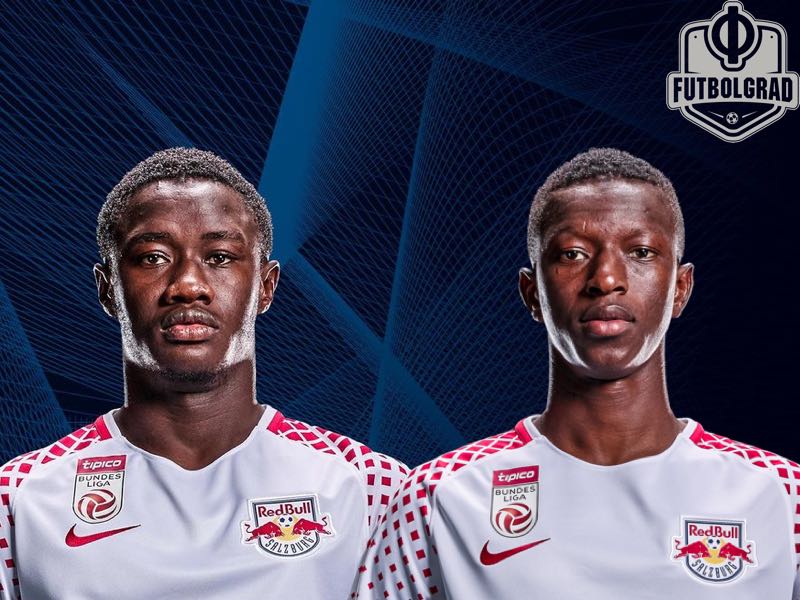 Naby Keïta will leave RB Leipzig this summer, perhaps earlier if one believes some reports, and RB Leipzig are already in the process of scouting replacements. Some of the players that have been linked with die roten Bullen in recent months include Borussia Mönchengladbach’s Denis Zakaria and two intriguing Malian prospects from Red Bull Salzburg Diadie Samassékou and Amadou Haidara.

Denis Zakaria was already linked with RB Leipzig last season, but his current transfer value might make him too expensive to be of interest for RB sporting director Ralf Rangnick. Red Bull Salzburg’s most exciting prospects are always naturally linked to RB Leipzig. Although Red Bull have on paper untangled the two clubs the transfer activities between the two clubs—since the inception of RB Leipzig 14 players have been signed from Salzburg—Red Bull continues to promote players within the extensive football system with the goal to have as many stars develop for their Bundesliga side.

Diadie Samassékou and Amadou Haidara are both part of the Red Bull football system. But while Naby Keïta was uncovered in France, both Samassékou and Haidara were discovered by Red Bull scouts in Mali. Both played for the JMG Academy Bamako in their native country before joining RB Salzburg where they then played for the academy team FC Liefering.

Jan Říha, a scout who has watched Haidara extensively in recent months, describes some of the strengths and weaknesses on his homepage. Říha believes that there are some comparisons to Naby Keïta when it comes to Haidara in particular. Haidara like Keïta “plays the ball smoothly, doesn’t put the receiving player under pressure, incredibly skilled at one-touch passing, fantastic vision behind the lines, either on the ground or through the air and the ability to pursue that vision and try it out…”

What are the key strengths?

When it comes to merely breaking down Haidara’s ability Říha lists three vital points. Number one he does not feel that Haidara tracks back often enough, which could be attributed to the presence of Diadie Samassékou, who usually does the dirty work for Haidara. Given that Leipzig are tracking both that problem could be easily solved. Furthermore, Keïta also has had issues with tracking back and has the likes of Diego Demme do the dirty work for him at Leipzig.

Second, when he got the ball he often attempts one-touch penetrating passes to break down defensive lines quickly. Third, his understanding of space, position and timing going forward is incredible, especially for a 19-year-old kid.

Speaking to the Futbolgrad Network directly Říha explains that there are also significant differences between Keïta and Haidara: I’d say that Naby is a much more rounded midfielder because he played as a defensive midfielder so he can play in a double pivot, Haidara has always played as the side engine of a one-two midfield.”Říha further explains “Amadou [Haidara] also isn’t really that much active as a dribbler, he outplays player by excellent positional and spatial awareness when [Keïta] is full throttle on ball player, [Keïta] is also a better passer, much more of a dictating type, Haidara, on the other hand, is the progressing player, he keeps the possession simple deep but in final third he takes a lot of risks, he’s also much better in the air

Despite differences, Haidara could replace Keïta

In other words, although they are not entirely similar players Haidara could replace Keïta. Speaking to the brass in Leipzig, however, highlights one of the main issues. RB Leipzig are no longer a newcomer in the Bundesliga. Instead, the club needs ready-made players to compete for the Champions League spots and eventually against Bayern for the Bundesliga title. Remember Leipzig is a Red Bull project after all, and Red Bull owner Dietrich Mateschitz has big ambitions with the football club in Leipzig.

Haidara, however, is just completing his first season in Austria’s Bundesliga. The midfielder spent most of last season with Liefering in the Austrian Erste Liga and played for Red Bull Salzburg in the UEFA Youth League, which the club won. This season Haidara, together Samassékou managed to break into the first team at Salzburg thanks to injuries in the first team.

Playing 18 games, the midfielder scored two goals and one assist he has impressed in Austria. Furthermore, Keïta showed that it is possible to make the jump from the Austrian top flight to the Bundesliga right away. But the significant differences between Keïta and Haidara could mean that Leipzig may have to bring in more than one player to replace Keïta in the end.

This, however, might not be a bad thing. Last season Leipzig often surprised opposition with their refreshing style of football. At times this season, it appeared that the opposition had figured them out and have learned to break down die roten Bullen.

Another factor is that Keïta, although still a key player, has been somewhat found out. This is especially highlighted by his dispossession numbers in midfield, which have gone from an average 1.6 per game to an average 2.6 per game—a significant jump up over the course of a season.

@ManuelVeth , not great? He is (at the middle of the season) still on track and far away of not playing well. Last season was an exception for everybody in the team. If somebody is telling he is not happy anymore and playing worse because of this,doesn’t know his character well. pic.twitter.com/3gsoM0zVDi

In other words, teams now know how to play against Keïta. For Leipzig, the departure of their midfield genius could, therefore, lead to a small adjustment of their football philosophy anyways. With this in mind the more defensive minded Diadie Samassékou, who is currently completing his second full season with RB Leipzig in Austria, could join Haidara on the what has become an Autobahn of exchange between the two Red Bull clubs.

Samassékou could, therefore, become the understudy of Demme, or even play together with Leipzig’s Gattuso like defensive midfielder in the Champions League, or against teams like Bayern and Dortmund in the Bundesliga, to create more stability. Either way, the double addition of the two would make sense and Haidara, in particular, could become the next great discovery of the RB Salzburg academy system.