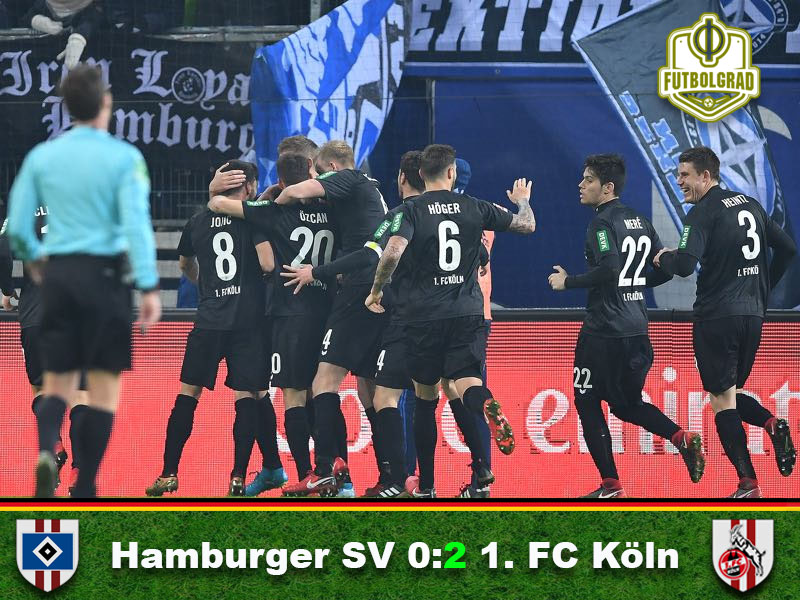 The great escape seems to be on for the Billy Goats as Hamburg vs Köln ends with a 2-0 victory for the effzeh.

Hamburg came storming out of the gate with André Hahn having a close-range effort turned away by Köln keeper Timo Horn. Shortly after Hahn sent Kostić into Köln’s penalty box with a deep pass the Serb crossed the ball low across the six-yard box and Köln’s defence had to scramble to clear the ball. Hamburg kept up the pressure and Köln sitting deep tried to hit Hamburg on the counter. As a result the game became an end to end affair with Yuya Osako being denied in a one-on-one situation by Julian Pollersbeck in the 11th minute, the keeper quickly sent his side forward and in the end, Filip Kostić had a fantastic low drive stopped by Timo Horn.

After a furious first 20 minutes, the game settled down with both teams looking for an opening. That opening came for Köln after a Milos Jojic corner kick with Osako flicking on the ball to Simon Terodde, who got his foot at the end of the cross to bring Köln ahead in the 27th minute. The goal allowed Köln to sit deep patiently awaiting Hamburg’s attacks. Der HSV in the meantime tried to speed the game up, but as a result, made many small passing mistakes that disrupted their buildup play. Filip Kostić almost had the equaliser before the halftime break when he received a ball inside the box, his close-range shot and rebound were both pushed away by Timo Horn.

The second half started frantically for both sides with both teams trying to gain control over the match. Köln, in particular, kept losing possession making it difficult for them to free themselves from Hamburg’s tight grip. On the other hand, Köln’s backline held out and was quickly able to break up any Hamburg attack that ensued from the Billy Goats losing the ball in midfield. The first 15 minutes, therefore, became a classic relegation dogfight with both teams desperate to make something happen.

In the 66th minute, Köln took command. Jojić broke free in midfield and received a lopped ball from Simon Terodde and with Pollersbeck coming off his line to challenge Terodde at the edge of the box the striker kept his calm and slotted the ball through the legs of the outstretched Hamburg keeper. The goal drained the life out of Hamburg’s play and allowed Köln to circulate the ball within their backline. In the 76th minute, Aaron Hunt almost got one back for Hamburg, his freekick from the edge of the box bounced off the upright though, and Köln was able to hang on for now. Salih Özcan almost added another in the 83rd minute when he dribbled through several Hamburg players inside the box, and only a last-ditch effort by a Hamburg defender saw his shot deflected and went wide of the goal. Hamburg in the meantime were entirely out of the match, and Köln were quickly able to play down the clock almost adding another with Lukas Klünter seeing a shot go wide after getting on the end of a Claudio Pizarro cross.

Hamburg vs Köln – Man of the Match

Hard to pick one in this game. Simon Terodde scored twice to keep Köln’s hopes of a comeback alive. The striker was fundamentally important for Köln to get the three points today. But on the other end of the field, it was Timo Horn, who kept Köln alive in the first half ensuring that his side had a fighting chance of winning the game when Hamburg were pressing hard. 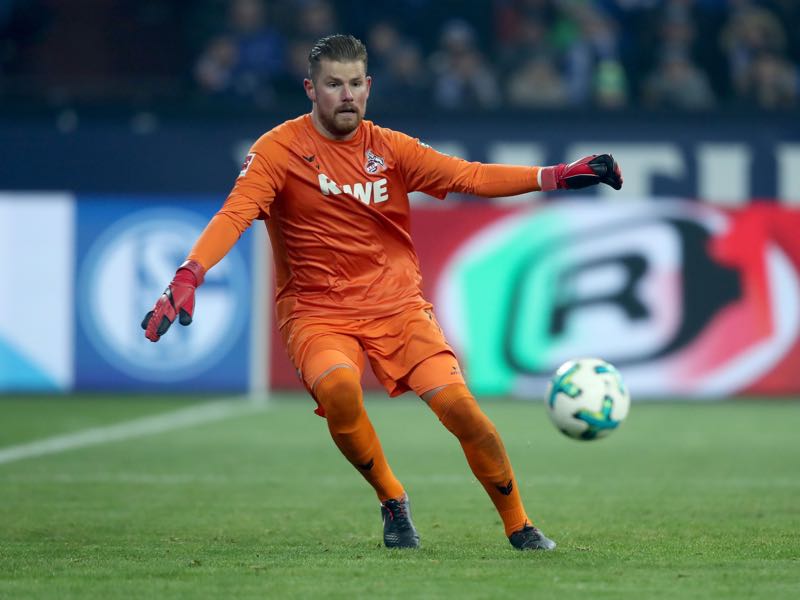 Timo Horn showed off some acrobatics to keep his side in the game. (Photo by Christof Koepsel/Bongarts/Getty Images)

Could the comeback be on? Twitter users certainly think so overwhelmingly voting in favour of an unlikely Köln comeback. Depending on Werder Bremen’s result against Bayern on Sunday Köln could narrow the gap to the relegation playoffs to four points. With now 12 points and with the bottom of the table tightly grouped together the great escape seems to be indeed on.

Everyone loves a good poll. @fckoeln_en will be hosting @HSV in a must win relegation battle match. Should Köln win this I believe they have a chance of staying up! What do you guys think will #effzeh do the impossible and stay in the #Bundesliga?