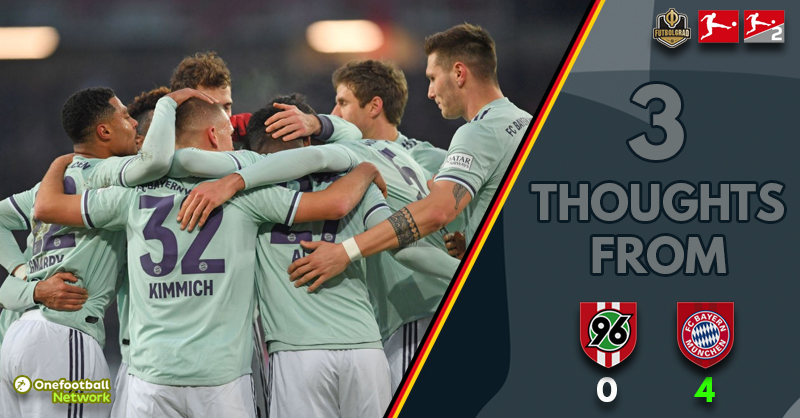 Hannover 96 v Bayern saw the Rekordmeister resurgent. Hannover 96, in fact, never stood a chance against a Bayern side that was not just clinical but also dominant in every area showing glimpses of the team that dominated the league over the last six seasons.

Here are our three thoughts from Hannover 96 v Bayern

Hannover are not the measurement

Bayern were immense in the 90 minutes against Hannover 96. But die Roten from Lower Saxony were hardly the yard-stick for a Bayern side trying to apply the pressure against Bundesliga leaders Borussia Dortmund.

“Bayern were unplayable today. Their Lamborghini was full, and our Trabant was empty. Everything went too fast, and we had no chance,” Hannover 96 midfielder Pirmin Schwegler told the media after the game.

“That was our best performance of the season. The 4-0 scoreline is still too little because we missed 3 or 4 100% chances. I would like to compliment the boys on this display,” Bayern head coach Niko Kovac concluded.

While Bayern were indeed impressive, however, Hannover were shocking. The side from Lower Saxony managed to complete e just 74% of their 220 played passes. Bayern, in the meantime, completed 690 of their 755 passes (91% pass completion). The Bavarians also won 61% of the duels. Impressive for Bayern, disappointing for Hannover side that is now looking the favourites to go down at the end of the season.

With him in midfield, Bayern were able to easily switch from the right to the left and the other way around. Thiago also was immense going forward completing all eight of his dribble attempts winning 14 of his 19 duels.

Thiago’s return, in fact, was a major reason for Bayern finally being able to manage a more direct play through the centre of the pitch. Although Leon Goretzka and Joshua Kimmich have managed to bring some much-needed stability to Bayern’s midfield the sense is that the combination of Thiago and Goretzka on the double pivot works better against more defensive minded teams like Hannover.

Joshua Kimmich and David Alaba immense from the flanks

“I’ve told Brazzo [Salihamidžić] and some players before the game that I have a good feeling and will score a goal. That was my first of the season, it was about time. I just had a good feeling on the way to the stadium,” Joshua Kimmich said after the game.

“He’s played a great game. He told us before the game that he will score and he did it. I was happy for him. I told him: one man, one word,” Salihamidžić commented on Joshua Kimmich’s performance. 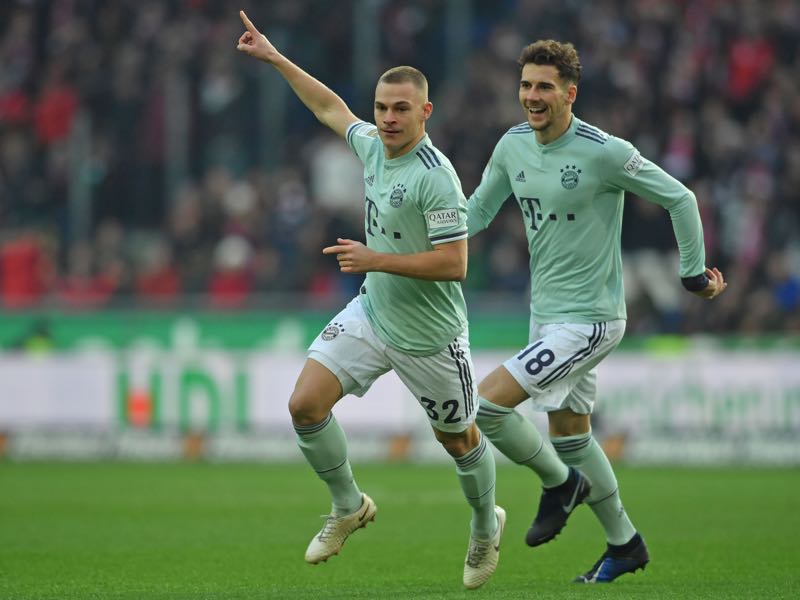 Despite being forced back to the right-back position, Kimmich managed to insert his presence. Scoring once and assisting on Lewandowski’s goal Kimmich completed 92% of his 62 passes, played eight key passes and four of his ten crosses found the target. It is not often that players dominate from the right-back position, but Kimmich did precisely that to earn the man of the match award.

But he was not the only one. On the left, David Alaba did the same. The Austrian completed 93.4% of his passes to finish 93.4% of his plays. Furthermore, the left-back scored a stunning goal to make it 2-0 for Bayern. With Alaba and Kimmich on form, Bayern were able to overload the flanks and give the wingers up front the opportunity to press up without ever having to worry about the space behind their backs.