Where has it all gone wrong for 1.FC Köln? Just in May, the club was on top of the world after finishing fifth in the 2016/17 Bundesliga campaign and returning to European football for the first time in 25 years. Sporting director Jörg Schmadtke and head coach Peter Stöger have considered the star architects of Köln’s revival fixing a club that seems unfixable just four years ago.

Now five months later Köln are rooted to the bottom of the table with just two points out of the first nine games in the 2017/18 Bundesliga season. The club has scored just three goals, conceded 17 and as a result find themselves six points behind 15th placed Freiburg.

In previous years the chaos would have eaten the club alive at this stage. Back in the 1990s leading up all the way to Stöger’s as the head coach in 2013 Köln were one of the most volatile clubs in German football. Relegated for the first time in the club’s history in 1998 the club had employed 19 different coaches and frequently moved back and forward between the Bundesliga and Bundesliga 2. 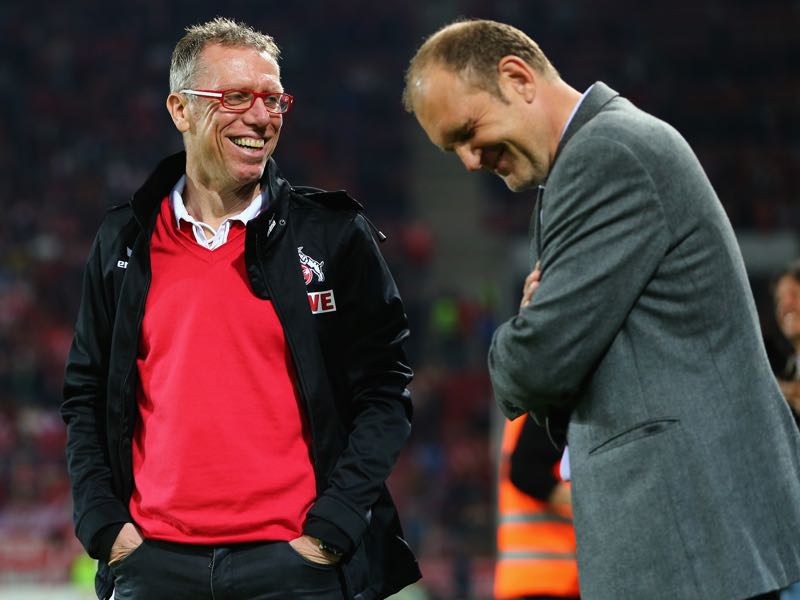 For the last four years Peter Stöger (l.) and Jörg Schmadtke (r.) were the faces of success in Köln. (Photo by Alex Grimm/Bongarts/Getty Images)

Fans are always an opinionated bunch, which is demonstrated by a recent report by AskFans, and many fans in Germany started to view Köln as a Fahrstuhlmannschaft (an elevator team) moving up and down erratically between the divisions—all that changed with the appointment of Werner Spinner as the president and Toni Schumacher as vice-president in 2012. Jörg Jakobs was also added to the board as the director of football and acting as chief scout and director of the academy he was instrumental in bringing in Peter Stöger and the appointment of Jörg Schmadtke as sporting director.

The two navigated the club back to the Bundesliga where the club finished 12th in 2015, ninth in 2016 and fifth last season. Financially the club managed to repay its debt and now has an equity of €20 million. The turnover also increased from €56 million to €120 million.

Schmadtke and Stöger – Symbols of Stability

In other words, everything was going perfect in the Domstadt, and der effzeh, in fact, seemed to be on course of becoming a major side in German football once again. But what followed was a summer in which the club demonstrated that the fundament laid throughout the years of success was not strong enough to withstand every tremor.

Faced with an offer from China Anthony Modeste, the club’s biggest star and top scorer, pushed for a transfer away from Köln. Having scored 25 goals Modeste was always going to be hard to replace, but Schmadtke went out and spent €17 million on Jhon Cordoba, who is a fantastic striker, but not a natural goal getter of Modeste’s calibre.

Cordoba, however, was only supposed to be one piece of the puzzle. Schmadtke had several other transfer targets in mind to replace Modeste and spent a significant portion of the €30 million received as part of the Modeste package. Hoffenheim’s Mark Uth, for example, was interested in return, Hoffenheim, however, were not willing to lose the striker. In other cases, players deemed of Modeste’s ability were not ready to make a move to Köln.

Köln were, therefore, a club deprived of their biggest star without the ability to sign a replacement. Schmadtke was therefore heavily criticised for letting Modeste go to China in the first place. But as Köln’s head of finances, Alex Wehrle pointed out to kicker on Thursday keeping Modeste would have been impossible. “How were we supposed to do that? Modeste earns in three and a half years ten times as much after tax than what he would have earned playing for Köln in the same period before tax. How are we supposed to keep a player like that? It wasn’t possible.”

The situation was, however, not helped with Modeste visiting Köln for home matches this season and telling the German press that he would have rather staid. All of that added to an already negative atmosphere and as negative results continued—cumulating in a disappointing 0-0 draw against Werder Bremen on matchday 9—it became clear that something had to be done.

Usually, at this point, it is the head coach, who faces the axe. But to the surprise of many, it was sporting director Jörg Schmadtke leaving the club this week. Schmadtke, however, was not fired but instead stepped down from his position to give the club “a positive impulse.”

Schmadtke – Can Köln Survive his Departure?

Rumours surrounding the club suggested that Schmadtke wanted to fire Stöger setting an ultimatum, which was turned down by the management resulting in Schmadtke leaving the club. The rumours were strongly denied by both Köln’s administration, and in an interview, Schmadtke gave to a Köln based newspaper.

The statements by both the club and Schmadtke were important. At that point, the situation threatened to escalate seeing a return of Köln as a chaos club. But on Wednesday the club sent a sign of life defeating Hertha Berlin 3-1 in the second round of the DFB Pokal. 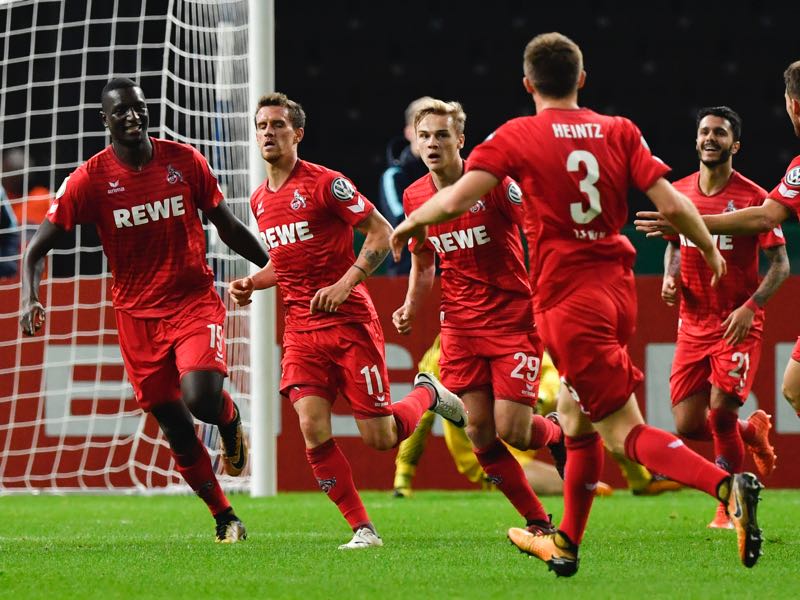 Köln’s 3-1 victory over Hertha could form the foundation of a new beginning at the club. (JOHN MACDOUGALL/AFP/Getty Images)

Off the field, the officials are adamant that even if the club is relegated Köln’s financial fundament would mean that the club would have the required financial means to return quickly. Also, several officials were quick to point out that the likes of Jörg Jakob have the sporting knowhow to make the necessary adjustments to restructure the club over the winter giving Peter Stöger the weapons required to stay in the league—one player linked to the club was Borussia Dortmund’s André Schürrle.

Regardless Schmadtke’s departure and the lack of success on the field will be Köln’s biggest challenge in recent history. The major question will be whether the club can navigate through this storm while keeping a calm bridge or will the club descent to the sort of mayhem that has let to disaster in the past?