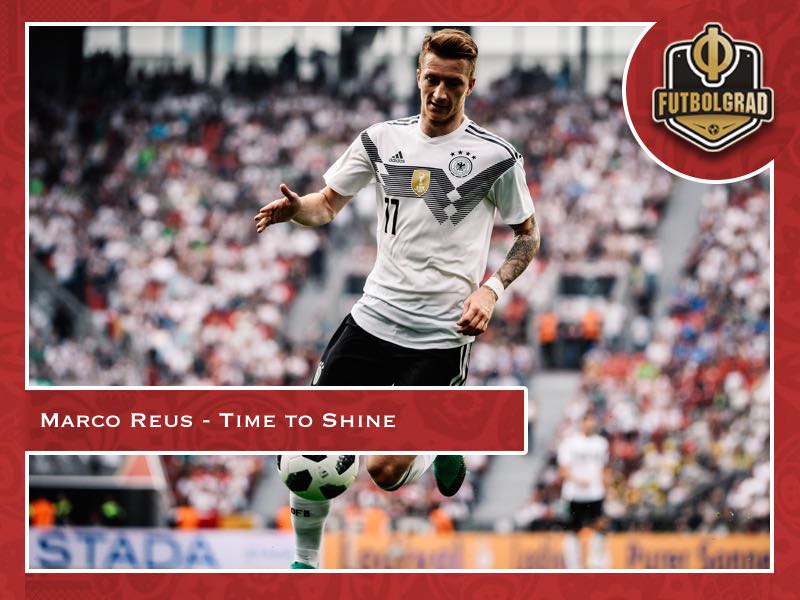 Marco Reus – The time is now to shine for Germany

“Of course, once the World Cup kicks off we will be much better,” Marco Reus told the press following Germany’s narrow 2-1 victory over Saudi Arabia. In fairness, the match against the Green Falcons was at times a hard watch with Germany interspersing brilliant play with episodes of long passes and poor give aways.

The match was further overshadowed by Germany fans booing Ilkay Gündogan after the national team midfielder met with Recep Erdogan a few weeks ago. Gündogan was brought on for Reus in the second half, and within the boos, it was almost overlooked that the Borussia Dortmund attacking midfielder will finally be able to take a major part at a tournament.

“I never worried about getting hurt throughout the match,” Reus answered when asked about his injury. It was at this stage four years ago that the midfielder’s World Cup dreams were shattered after he suffered a complicated ankle injury in the friendly against Armenia.

Germany then went all the way to the final in Rio de Janeiro, and it was Reus’ friend Mario Götze who scored the game-winning goal to secure the fourth star for Germany. Götze would later hold a shirt with Reus’ name in the cameras, but the now 29-year-old Reus has admitted that he had long gone to bed, turning off the television set right after the final whistle had gone in Rio.

His friend Mario Götze will not be in the squad when Germany travel to Moscow on Tuesday. But for the first time since the 2012 European Championships Reus will take part at a major tournament for Germany.

Injuries have often stood in the way when it came to Marco Reus achieving more in his career. The Borussia Dortmund attacking midfielder missed not only the 2014 World Cup but also the 2016 European Championships in France. Two matches at Euro 2012 – 80 minutes in the quarterfinal against Greece and 45 minutes in the semifinal against Italy – is all the tournament football Reus got to experience throughout his career. 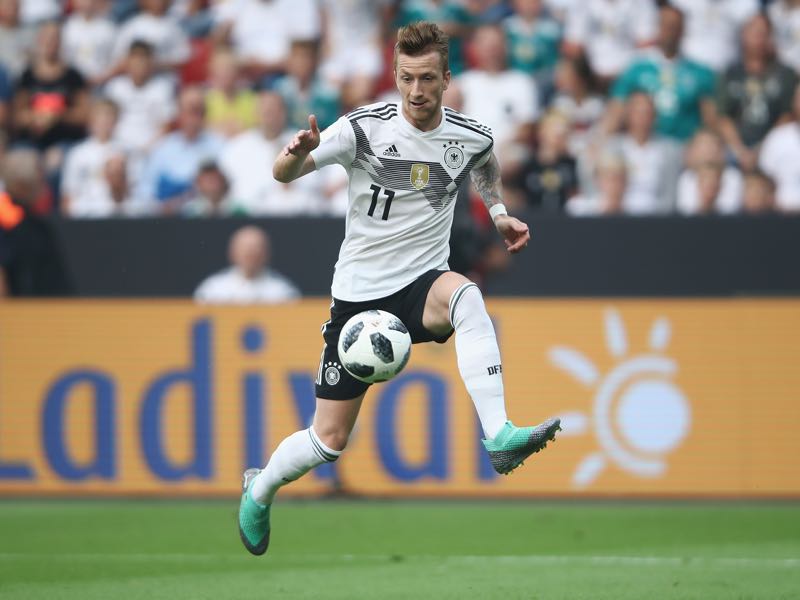 Overall, in fact, Reus has only played 31 games for his country. At the same time, he managed to score nine goals and five assists in those games – in other words, one could only imagine the impact a healthy Marco Reus would have had on world football.

That sort of impact was visible even on Friday night. Reus was one of the best German players on the field – showing his full reservoir of talent the 29-year-old was later called a “rocket” by Bundestrainer Joachim Löw. Löw, in fact, will heavily rely on the Borussia Dortmund attacking midfielder once the tournament goes underway.

Although Germany have an array in attacking talent Reus brings a particular element of surprise that is hard to quantify at times. When on form the attacking-midfielder makes runs that appear to have come from a textbook or a computer simulation. They are calculated and yet unstoppable by the opposition. “He plays like someone from a Playstation”, his former, and future, club coach Lucien Favre once told the media, “Reus feels football and his playing intelligence is unbelievable.”

It is the sort of talent that Löw loves and that will be critical for Germany at the World Cup. Die Mannschaft has the technical and tactical ability to dominate sides but at the same time play a pass or two to many and lack the efficiency and directness to get past deep sitting defensive lines to achieve a breakthrough.

It is for those occasions that teams need players like Marco Reus. The 29-year-old can act like a bottle opener running into the opening space, even though his runs can be predictable, his directness and ability to spot openings make it impossible at times to stop him.

With those sorts of abilities, there were good reasons why all top clubs on the planet wanted to sign Reus on several occasions. Injuries and his deep roots in Dortmund have always prevented a move to one of Europe’s mega clubs, however. 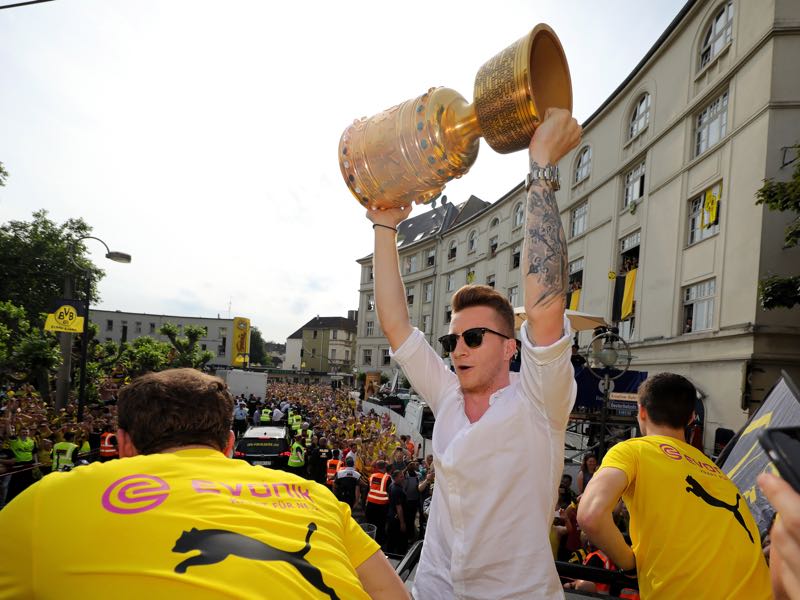 Even his biggest triumph, winning the DFB Pokal with Dortmund in 2017, was overshadowed by an ACL injury (Photo by Pool – Getty Images)

At Dortmund, he is without a star and his seven goals in eleven games towards the end of the season are perhaps the only reason the Yellow and Blacks are playing in the Champions League in the 2018/19 season. Until then, however, Reus has his very own mission.

While four years ago he was unable to lift the golden trophy into the Rio de Janeiro sky Reus now wants to raise the trophy on July 15 in Moscow. Reus, in fact, has only ever one trophy – the DFB Pokal last May – and fitting to his tragic career the 29-year-old would rapture his ACL in his first ever moment of glory.

Without further injuries, Reus will be the key player in this Germany side. His unique abilities may make him the only player, aside from Toni Kroos, who cannot be replaced when Germany start their World Cup defence on June 17 against Mexico at the Luzhniki Stadium in Moscow.