Martin Ødegaard – Can he replace Julian Brandt at Bayer?

It is not quite a done deal yet, but by all indications, Bayer Leverkusen should sign former Norwegian wunderkind Martin Ødegaard from Real Madrid in the coming days. Whether the 20-year-old will join Bayer Leverkusen on loan or on one of Real Madrid’s famous buyback agreements remains to be seen but one thing is for certain this is a deal that has the potential to work out well for all parties involved.

For Martin Ødegaard, in fact, the move to Leverkusen could finally be the opportunity to test his skills at the highest level in the Bundesliga and also the Champions League. The sort of level of football Ødegaard hoped he would regularly experience when he joined Real Madrid from Strømsgodset IF in 2015.

Just 16 at the time it may have, however, been a step too far for the teenager. Although no-one truly expected that Ødegaard would get first-team minutes right away there was an understanding that he would be allowed to train a certain amount with the first team while playing for Real’s reserve side.

But perhaps the now 20-year-old expected to make gains on the training pitch a bit to fast, in fact, in football, it is all about patience and at times Ødegaard struggled in Real’s setup. Unlike other sports where you can simply head to SteroidsFax to increase your gains, Real asked for patience and hard work. Ødegaard, however, struggled with both at times and after two years in which he played just once for Real Madrid’s first team was loaned out.

In January 2017 the Norwegian was loaned out to SC Heerenveen in the Netherlands. Over the next 18 months, he made 38 appearances and scored three goals.

Good, but not outstanding. Hence, Real Madrid opted to loan out Ødegaard for a second time last summer. At this stage, his reputation as the world’s next superstar had already taken a hit.

Once regarded a future Ballon d’Or winner and a world star that could reach the levels of Lionel Messi and Cristiano Ronaldo Martin Ødegaard now appeared ordinary. At the same time, Ødegaard simply suffered the fate of a player, who at the age of 15, may have been simply ahead of his development. 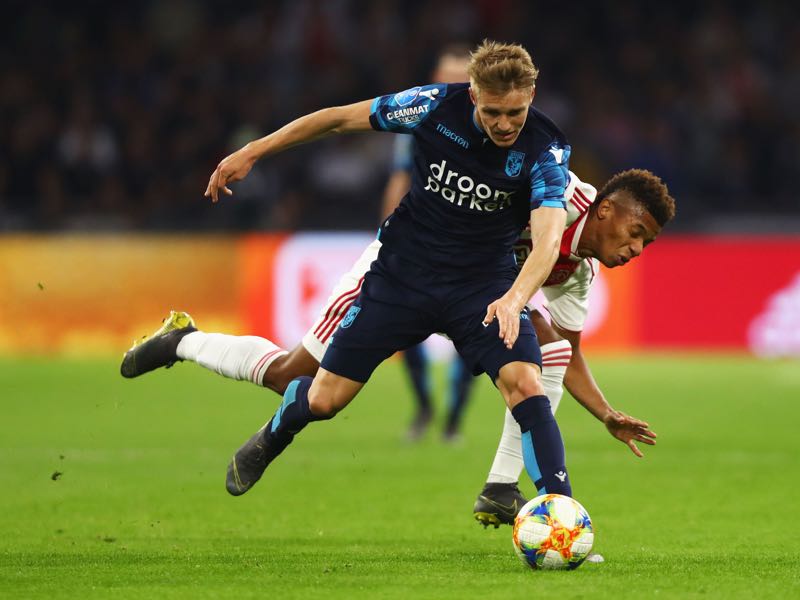 Martin Ødegaard of Vitesse battles for the ball with David Neres of Ajax during the Eredivisie match between Ajax and Vitesse at Johan Cruyff Arena on April 23, 2019 in Amsterdam, Netherlands. (Photo by Dean Mouhtaropoulos/Getty Images)

Furthermore, no development curve is continuously upwards, and with Real Madrid, Ødegaard may have simply asked for too much as his first club in a top European league. Therefore, when Ødegaard joined Vitesse Arnhem last summer only a few took notice, some even just shrugged pointing out that he may have peaked too early.

Ødegaard, however, made the most of his opportunity. In 39 games across all competitions, the 20-year-old scored 11 goals and 12 assists. As a result, his transfer evaluation on Transfermarkt catapulted from €4 million to €15 million.

Furthermore, already written off by most clubs the Norwegian all of a sudden highlighted why he was named among the best prospects of his generation back in 2015. Hence, with the end of his loan this summer several clubs, including Champions League semifinalist Ajax Amsterdam attempted to sign the player.

Bayer Leverkusen, looking for a replacement for Julian Brandt, who will leave the club for Borussia Dortmund this summer, identified Martin Ødegaard as the ideal player to fill that role. Meanwhile, Real Madrid have had good experiences when it comes to developing their players in Germany and in Daniel Carvajal, a player, who had his first breakthrough during a loan spell at die Werkself.

“He is an interesting player for us,” Bayer Leverkusen’s sporting director Simon Rolfes said about Ødegaard to Bild recently. But is he the sort of player that can fill the void left by Julian Brandt?

With the caveat that Ødegaard played in a less competitive league last season, we have taken a closer look at the two players’ numbers from last season. Three years younger than Brandt, Ødegaard managed to be slightly more productive than the German national team player. Whereas Brandt scored 0.25 goals per 90 minutes, Ødegaard managed 0.28 goals every 90 minutes.

In terms of expected Assists, however, Martin Ødegaard (16.88) led over Julian Brandt’s 11.11 xAs. In fact, Ødegaard would rank first among all Bayer players in that category had he been with the club last season.

Again those numbers have to be taken with the grain of salt that they were produced in the high scoring Eredivisie. Furthermore, Brandt was not always playing in an attacking role last season but was often brought back to play in a central midfield role.

Almost like Bastian Schweinsteiger did under Louis van Gaal, Brandt, in fact, has somewhat revolutionised his game under Peter Bosz last season. Hence, it is not surprising that Brandt led Bayer with 53.57 passes per 90 minutes and was third with 82.55% completed passes per 90 minutes.

It would be difficult to imagine for Ødegaard to fill that void right away. But with 39.11 passes per 90 minutes, he would already rank fifth in Bayer’s current squad, and his 82.16% completed passes ranks just slightly below Brandt’s numbers in that category. Furthermore, Ødegaard, similar to Brandt, might be a dynamic winger, but unlike the German national team player more often goes into dribbling rather than looking to lay the ball off or play a pass.

In fact, Ødegaard averaged 6.97 dribblings per 90 minutes for Vitesse last season. More than any Bayer Leverkusen player, including dribble machine Leon Bailey (6.54 dribbles per 90 minutes). That, however, does not mean that Bosz might play Martin Ødegaard in a box-to-box role. After all, Naby Keïta, at RB Leipzig, and Thiago, at Bayern, have both excelled in the role as fantastic dribblers and in some ways Ødegaard could add an interesting dimension to Bosz’s 4-3-3 setup next season and fill the void left by Brandt.