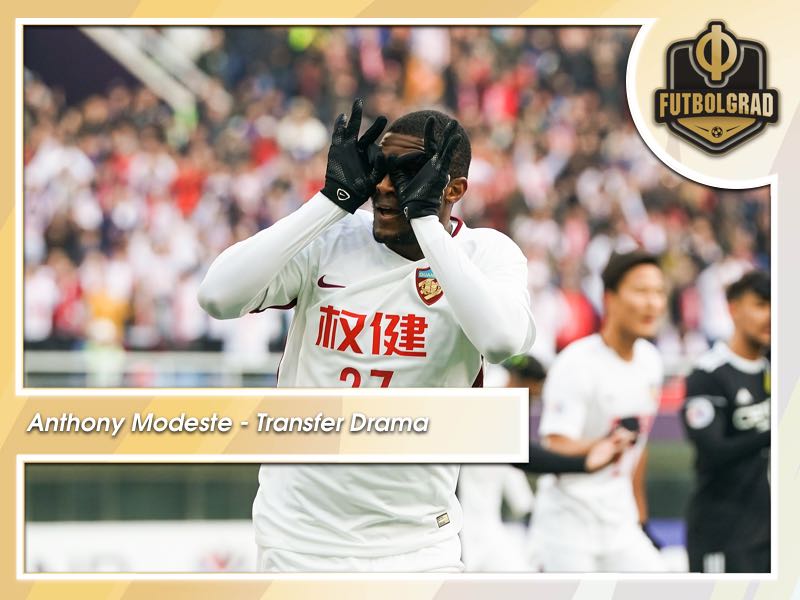 The transfer drama involving Anthony Modeste started in the summer of 2017. The French striker had just completed his best season scoring an incredible 25 goals and three assists in 34 games for 1.FC Köln.

It made him one of the most inform strikers in European football and thanks to his goals Köln qualified for European competition for the first time in 25 years. In fact, the 2-0 victory on matchday 34 against 1.FSV Mainz was celebrated like a Bundesliga title in Cologne.

But the celebrations were soon undermined when it emerged that the club’s best player wanted to move on. Modeste, having his heads turned by the riches of the Chinese Super League, wanted to cash in as his career reached the pinnacle.

Throughout the summer of 2017 stories of offers from Chinese clubs dominated the press. A transfer was either imminent, had failed or Modeste had changed his mind and wanted to stay in Germany after all.

In the end, a deal was boxed through. Modeste joined the Chinese Super League side Tianjin Quanjin in a deal worth €29million. A good deal for Köln, who appeared to be set up for years financially. With the transfer to China ended the first of four acts in the Anthony Modeste transfer drama.

The problem, however, was that the Billy Goats failed to sign a proper replacement for their top striker. On the backs of their most successful season in over two decades, Köln struggled at the start of the 2017/18 campaign. The club lost 14 out of the first 17 games in 2017/18 and did not collect a win until matchday 17.

With Köln stuck at the bottom of the table, the Billy Goats were forced to act. First sporting director Jörg Schmadtke, the mastermind behind building the team but also the man who sold Modeste without finding a proper replacement was let go. Then head coach Peter Stöger, who would later hire on at Dortmund, was fired on December 3. Schmadtke and Stöger were the architects of Köln’s return to Europe but the Modeste transfer, and the failure to sign a replacement, in particular, put a rift between the two decision makers that was never probably addressed. 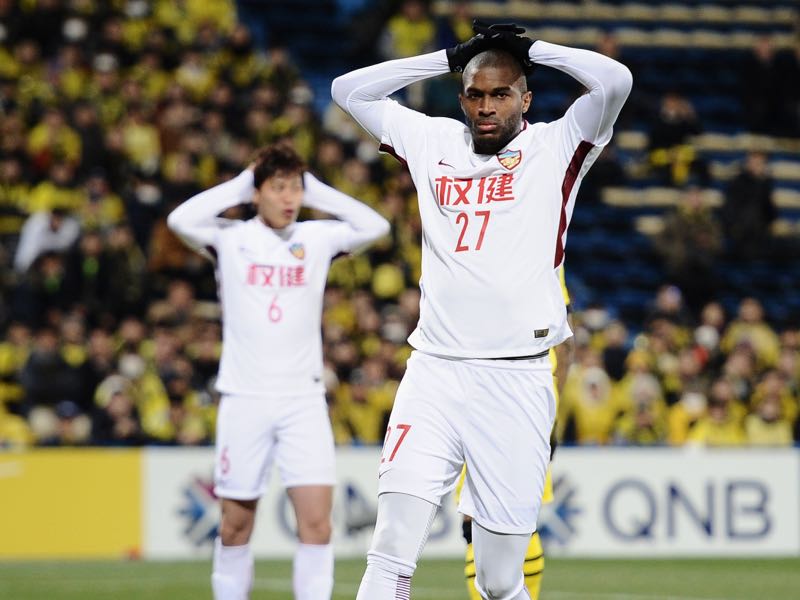 Stöger was replaced by Stefan Ruthenbeck. Under the interims head coach, the second half of the season saw some improvement for Köln. But just four wins and 15 points were not enough to make up for a disastrous first half of the season.

Meanwhile, Anthony Modeste never seemed to be fully at home in China. Although he scored seven goals and three assists in the second half of the 2017 season he was more often seen on the stands of the RheinEnergieStadion then the fields of Chinese Super League teams.

After all the striker had left his family behind in Köln, cheering for his former club seemed to be a major distraction though. In his second season in China, his productivity dropped significantly as he scored just four goals in 12 Chinese Super League games.

On August 4, 2018, Modeste would play his last game for Tianjin Quanjin. Köln, in the meantime, were getting ready for the Bundesliga 2 season under new head coach Markus Anfang, who was signed from Holstein Kiel.

Under Anfang, Köln had a good start to the 2018/19 campaign. Scoring 47 goals in 18 games the Billy Goats are currently ranked second in the league behind Hamburger SV. Furthermore, up front strikers, Simon Terodde, 22 goals in 17 games, and Jhon Córdoba, seven goals in 16 games, are getting the job done.

And Modeste? The striker cancelled his contract on August 26, 2018. The German paper Bild am Sonntag reported that Tianjin Quanjin had failed to pay Modeste his €15 million marketing bonus and also did not pay him his salary in July. As a result, the striker used article 14 of the FIFA regulation governing player transfers to terminate his contract.

“In the case of a club unlawfully failing to pay a player at least two monthly salaries on their due dates, the player will be deemed to have a just cause to terminate his contract, provided that he has put the debtor club in default in writing and has granted a deadline of at least 15 days,” the article reads.

“There will be no way back for me,” Bild am Sonntag quoted the striker. Hence, while Köln’s striker Simon Terodde bombed his way through the Bundesliga 2 Anthony Modeste all of a sudden was a free agent.

What followed were various links to several Bundesliga teams. Borussia Dortmund, VfB Stuttgart, Schalke Bayern München, top clubs in Turkey all of them were at one point or another linked to Modeste. The striker, in the meantime, returned to his family in Cologne and in October started to train with the squad of his former club.

Then on November 9, 1.FC Köln announced the signing of Anthony Modeste. The lost son, perhaps the most popular players since Lukas Podolski would return to Cologne and play for his effzeh the club’s President Werner Spinner announced on a gala to celebrate the club’s 70th birthday.

“We have been in contact with Tony for weeks. When we realised that there is a chance to figure out his contract situation and sign him to a fair deal, we did everything to get it done,” Spinner told the media at the time. “I am happy and thankful that I can return to Köln,” Modeste added.

Both the club and the player were certain that Modeste could be signed on a free transfer. A certainty that could not even be undermined by a statement released by Tianjin Quanjin on November 18 in which the CSL club announced that they would challenge the free transfer in front of the Court of Arbitration in Sports (CAS).

“We will do everything in our power to defend our interests. We have initiated a lawsuit against 1.FC Köln and Anthony Modeste in front of the CAS,” the club announced on its official homepage.

As a response to the signing of Anthony Modeste by FC. Koln, Tianjin Quanjian officially claimed that 'we will take every possible means to protect our interests. We have made preparations to initiate a lawsuit on FC. Koln and Anthony Modeste in Court of Arbitration for Sport. ' pic.twitter.com/i4D66FOYw3

Köln, in the meantime, felt they were on the safe side. “According to our information, and according to the evaluation from our lawyers, Modeste rightfully terminated his contract,” CEO Alexander Wehrle told the German paper Express.

The Billy Goats, however, were wrong. On December 11, 1.FC Köln announced on their official homepage that the FIFA court of arbitration had ruled that Modeste had terminated his contract without a good reason. The court ruled that Tianjin had to pay Modeste’s outstanding salary but that the lack of payments were not a good enough reason to leave the club on a free transfer.

Köln announced that they would challenge the decision at the CAS but that weeks could pass until a final decision will be made in this case. At the same time, Köln felt certain that they were on the right side of the law. But with Modeste’s contract situation doubtful the striker was not allowed to play in official league matches.

The story would, however, have yet another turn. On January 9, while Köln were getting ready to prepare for the second half of the season, which kicks off with an away game against Union Berlin, the story broke that Tianjin Quanjin’s owner Shu Yuhui was arrested after his companies had been involved in a pharmaceutical scandal.

As a result, of Shu Yuhui’s arrest, Tianjin Quanjin in its current legal form was dissolved, and the league licence and all existing club structures were placed under local state administration. On January 8 a tweet made the rounds on Twitter showing the current Tianjin Quanjin logo removed from the club’s home stadium.

“Football helps us understand how the rule of law in China really functions – Tianjin Quanjian owner Shu Yuhui not even charged with any crime so far, yet club name already changed by CFA and team badge being taken down from stadium”, the founder of the Chinese football blog Wild East Football Cameron Wilson wrote on Twitter.

Reuters, in the meantime, reported that authorities in the Chinese port city of Tianjin had said in December that they were investigating TCM firm Quanjian Group over allegations including false marketing. Quanjian, headquartered in the northeastern city of Tianjin, has been under fire after an article recounting the death of a four-year-old girl from cancer went viral on social media. The girl had received treatment from the firm.

What will happen to Shu Yuhui remains to be seen but Chinese authorities have already moved quickly to dismantle his business empire including his football club. Hence, legally speaking Tianjin Quanjin as a football entity has been dissolved as the Chinese Football Association is looking for new investors to take over the now available licence.

According to the German paper, Express the club, however, has not been dissolved, like it has been reported in many European and Chinese outlets, but is merely undergoing a name/ownership change. Furthermore, it was also reported that many players had received their salaries in this month. The paper is basing this on German law and the Bayer Uerdingen to KFC Uerdingen name change, in particular.

Instead a better comparison would be the Chivas USA to Los Angeles FC change in Major League Soccer. In that particular case LAFC took over the licence from Chivas USA but legally speaking was a new entity with no legal obligations to players owned by the former club.

Ultimately, the future of Tianjin Quanjin, or any future club playing in the port city, remains in doubt as it is difficult to gauge the murky world of Chinese football business. For Modeste, the recent events could have both a positive or negative outcome depending on which turn the events will take in China.

Best case scenario FIFA will not recognise any new legal entity as the successor of the current club and drop the case against the striker. Alternatively, a new ownership group could meet all financial obligations and might even ask for compensation from Modeste and Köln. Either way, the world will have to wait for the final act in Anthony Modeste’s Chinese transfer drama.