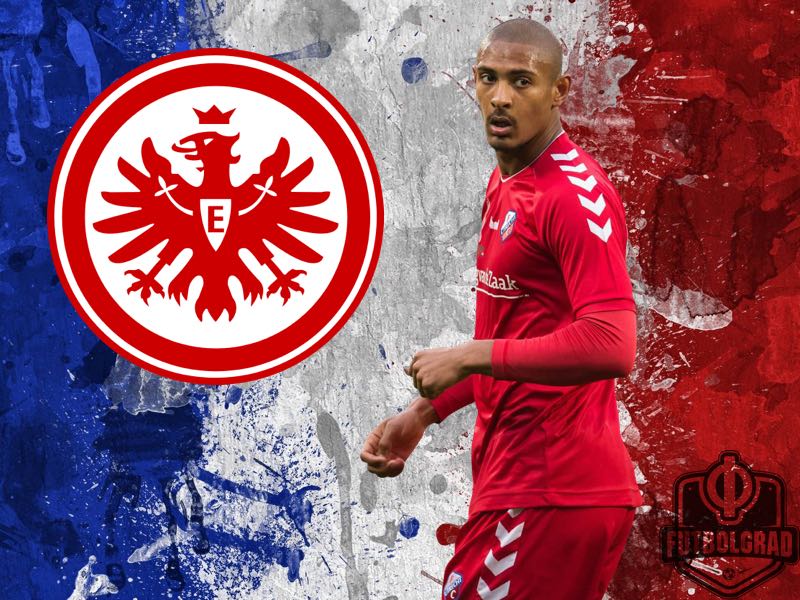 Sebastien Haller – The Beginning of a New Era in Frankfurt

Sebastien Haller has been Eintracht Frankfurt’s biggest summer signing and the French striker could herald a new era for the Eagles.

Eintracht Frankfurt spent just €2.2 million on new players last summer, which was the lowest amount paid by any Bundesliga club. After an exhausting season and a battle again relegation, Frankfurt’s funds were limited, and they had to bring in many players on loan. A successful DFB-Pokal campaign later, Frankfurt have manged to rebuild their finances and are now in a position to compete with other Bundesliga clubs financially.

The club’s new ability to attract key players on a permanent basis has been demonstrated early in the transfer window as one of the best, young centre-forwards of the Eredivisie, Sebastian Haller, signed for the Eagles. Once again, there had been no media leaks until the transfer was announced by the club—typical for the work done by Eintracht Frankfurt’s sport director Fredi Bobic. Frankfurt nearly doubled their previous transfer record by paying around €8 million for the hard working French striker, who seems to be a suitable replacement for the ageing “Fußballgott” Alex Meier.

Sebastien Haller began his footballing career at the age of nine with FCO Vigneux, before moving to Bretigny Foot in 2005. After a two-year spell at the club, Haller made his big move to Ligue 1 side AJ Auxerre, a club which has also developed the likes of Bacary Sagna and Philippe Mexès. Haller spent five seasons at youth level in Auxerre and made his international debuts for France’s U16, U17 and U18. Haller signed his first professional contract in the summer of 2011 and broke into the first team a year later. However, he could establish himself as the first-choice striker making 57 appearances, while only scoring eight goals.

The Dutch Eredivisie side FC Utrecht brought him in on-loan in January 2015 season, and Haller managed to fulfil his potential immediately and won Utrecht’s Player of the Year award, which convinced Utrecht’s owners to spend €800,000 to secure his services permanently. Utrecht would go on to finish fifth and fourth in the following seasons, and Haller managed to score 51 goals in 88 games while assisting 17 more goals. In the same time, the Frenchman made 20 appearances for his country’s U21 side and scored 13 goals, which is a remarkable output. After Utrecht declined multiple offers for Haller in January, it was time to move on for Sebastian Haller to Frankfurt this summer. 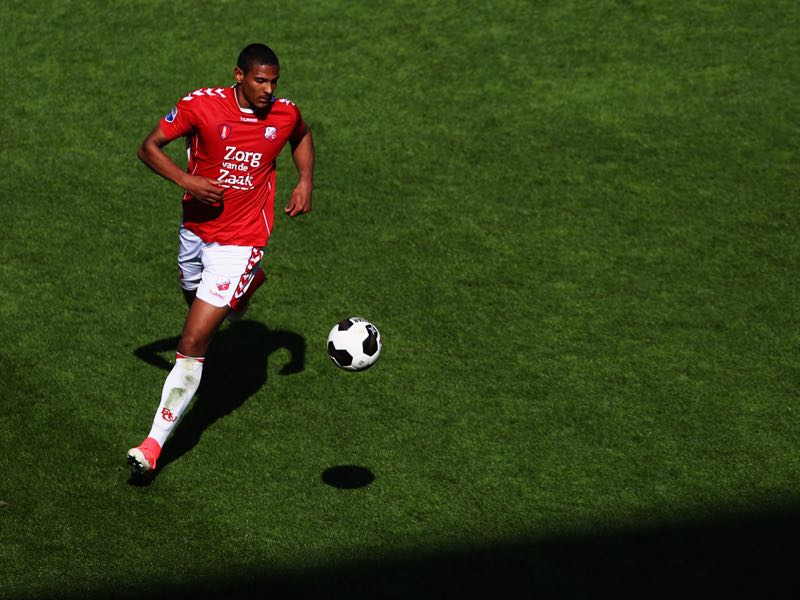 Sebastien Haller has been outstanding for FC Utrecht in the Eredivisie. (Photo by Dean Mouhtaropoulos/Getty Images)

After his move to Frankfurt was announced, Haller proudly described how it feels to sign for a Bundesliga club: “I’m really happy and satisfied to sign for this beautiful club. I’m looking forward to playing this season.” He also stated that his main target is to “keep learning. I’m still young and want to improve myself and play in a big competition like the Bundesliga. I want to score goals and want to make this club even greater.”

Several English clubs had shown their interest in Haller in January, but Haller and Utrecht turned the down. This summer, however, Eintracht Frankfurt managed to convince the French U21 forward to sign for the Eagles. For Haller, “It’s a combination of things – whether that’s fans, the stadium, the coach (Niko Kovac)” that persuaded him to join the team, which finished 11th in the Bundesliga.

Sebastien Haller was Always Attracted to the Bundesliga

Haller stated that “The Bundesliga has always attracted (him). Frankfurt, regarding style of play, role progression—it’s a perfect choice. It seemed the most logical (step) to continue (his) progress and have fun.”

He will most certainly have a good time in Frankfurt because the Frankfurt’s club officials “introduced me to a project built around (him)”, Haller said to the local press. Therefore it’s hardly surprising to hear Frankfurt’s CEO Fredi Bobic described Haller as their “absolute priority” on the transfer market. Bobic was seemingly delighted when the deal was announced and outlined why he was pleased to secure Haller’s signature. „We wanted to improve our offensive and raise its quality,” Bobic said, “we are sure that he will fit in nice and give us a lot of pleasure.”

Sebastien Haller is seemingly highly rated among Dutch sports journalists, and some even compared him to the legendary Thierry Henry. The comparison to Henry might be far-fetched in the era of click-bait and sensationalism, but there are more than a few indications that Haller could play an integral part in Frankfurt’s mid-term plans.

His main strength is quite clearly his physical appearance. Standing at 6ft 2in, he is a constant threat in the box and during-set pieces. Due to his aerial presence, Haller won nearly 55% of his aerial duels last season. Compared to the horrific output of Frankfurt’s first choice striker Branimir Hrgota, who won just one out of ten aerial duels, Haller certainly adds another dimension to Frankfurt’s game. Frankfurt’s striker did not score a single headed goal this season.

Sebastien Haller is also very much involved in his team’s attacking play and shows his strengths as a hold-up player more than once a game. The Frenchman averages 21.8 successful passes per game, more than any other Frankfurt attacker, and regularly lays the ball off to his team mate as his record of 0.13 assists per game underline. Out of Frankfurt’s current attackers, only Alex Meier matched this figure. 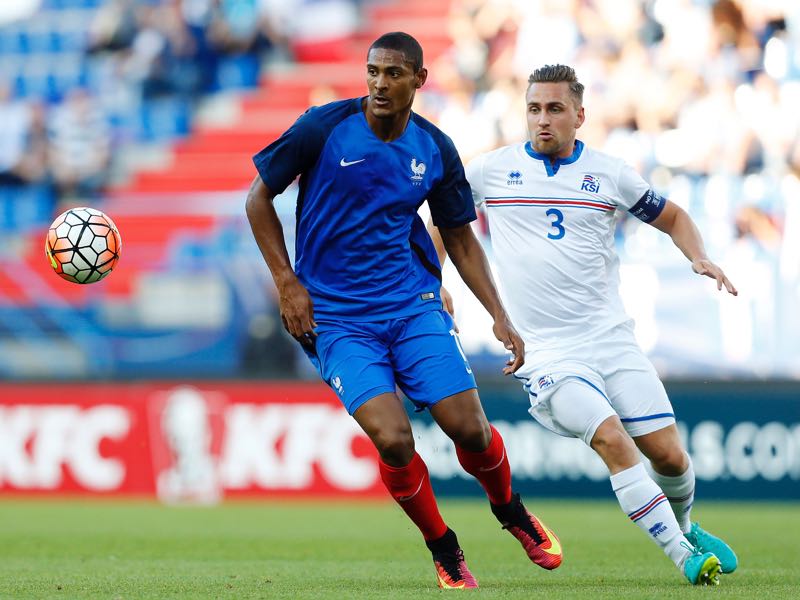 It also has to be mentioned that Haller’s decision making is very mature for his age and he seems to evaluate situations in games fast and mostly correct—something that the Frankfurt fans will be glad to hear as it’s been frustrating for them to watch their attackers wasting many chances last season. However, it has also to be mentioned that Haller can still significantly improve his passing accuracy as his pass completion rate of just 66% indicates. It would not be fair to Haller to nail this down to him only because he obviously needs the support of his teammates to complete a pass successfully. It remains to be seen if this figure significantly improves next season.

Transition from the Eredivisie to the Bundesliga can be Difficult

Surprisingly, Haller is very quick for his height and possesses a great technical ability, which he successfully demonstrated with a magnificent bicycle-kick against ADO Den Haag last season. His quickness is also shown by his constant demand for trough-balls as Haller is always moving across the defence line demanding a pass from his team mates.

Besides that, his defensive work rate is not very common among strikers. Haller is a hard working striker, who is always tracking back to put pressure on the defenders. This might be one of the reasons why Niko Kovac supported the idea of bringing him to Frankfurt because his style of play is very intense.

The transition to one of Europe’s top five leagues is often an obstacle for young players as they struggle to adapt to the higher level of play, but this shouldn’t necessarily be the case with Haller. He is not a versatile player and needs the support of his teammates. His strengths come to play when he’s used as the team’s focal point up front—in the air and on the ground and Frankfurt are seemingly planning to follow this path as Haller indicated a project would be built around him. Building the project around him should help him to settle in rather quickly.

Considering Haris Seferović’s departure, Alex Meier’s regression and Branimir Hrgota’s significant underperformance, it was wise from Eintracht Frankfurt to address their most obvious weakness early in the transfer window – scoring goals. Frankfurt managed the least amount of goals (36) of any side in the top 12 and desperately need a clinical striker in front of goal. The man, who helped Utrecht to secure European football for next season and therefore seems to be the perfect fit to fill the vacancy.