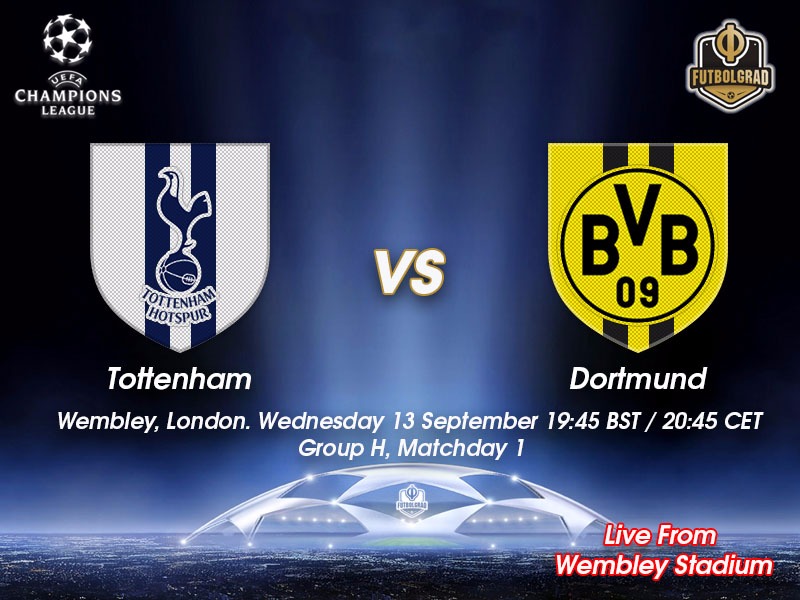 Welcome to our Champions League Tottenham v Dortmund Minute by Minute report from Wembley Stadium in London. Tottenham Hotspur have struggled to play their home games at Wembley Stadium and face one of the toughest challenges in Borussia Dortmund. Dortmund in the meantime come off the back of a disappointing 0-0 draw against SC Freiburg and will want to get back to their winning ways.

Tottenham have picked apart an unusually poor Dortmund side this evening. Littered with mistakes across the field, Bosz will be furious at the way in which his game plan was disrupted by individual errors. Dortmund were lucky, it could have been a lot worse than the 3:1 scoreline suggests.

Dembélé should have scored a fourth for Tottenham but the striker looked short on energy.

RED CARD: Vertonghen receives his marching orders for an elbow to the face of Götze. The replay shows it was an exceptionally harsh decision.

The fourth official indicates we’ll have an additional four minutes. Dortmund will be glad to hear the whistle I’m sure.

Castro picks up a yellow card for back-chatting the referee, it’s frustration all around for the men in yellow and black this evening.

Substitution: Tottenham — OFF Kane > ON Llorente

Two goal Harry Kane leaves the field to a standing ovation, he has been a thorn in the side for Dortmund this evening.

Five minutes left for Borussia Dortmund to salvage some pride. They’ve been picked apart this evening by an impressive Tottenham side. Pochettino has the London side playing some beautiful football.

Pulisic floats a dangerous ball into the box but it evades everyone.

Kane goes within millimetres of making it 4:1, the ball zips past the left hand post.

Substitution: OFF Toprak > ON Zagadou — Toprak must be carrying an injury, otherwise it’s an odd substitution to make when two goals behind.

12 minutes for Dortmund to somehow find two goals and salvage a point. It looks unlikely, in fact it looks almost impossible.

Eriksen with a great opportunity to make it four but he can’t find the right shot, it looked to have taken a deflection but the referee says otherwise. Goal kick!

Substitution: Dortmund — OFF Dahoud > ON Castro

Tottenham have been sharper and brighter than their German opponents so far, and it shows in the scoreline. The midfield of Borussia Dortmund hasn’t been able to stamp its authority on the game and the back line, well they’ve had a day to forget.

It’s Kagawa who makes way for the world cup winner. What can Götze inspire in the last 25 minutes?

Mario Götze looks like he’s about to come on, he’s receiving last minute instructions from the side.

Dortmund look to have had the wind knocked out of them with that third goal, they need to regroup fast here at Wembley.

It's begining to look like a long road back now for Dortmund… #TOTBVB pic.twitter.com/reZK50KdKG

GOAL: Tottenham 3:1 – Kane gets his second of the night after giving Piszczek the slip. It’s been a night of costly errors for Dortmund.

Vertonghen brings down Yarmolenko and receives a yellow card. Aubameyang lines the free kick up, but he can only send the ball high over the Tottenham crossbar.

Pulisic picks the ball up on the left and drives at goal, some neat interplay finds Yarmolenko and the shot is blocked.

Sokratis plays the ball back to Bürki under pressure from Son, the Dortmund ‘keeper didn’t want the ball in that area, he sweeps it clear first time — risky from Sokratis.

Kane picks out Son, unmarked he can only lift the ball over the bar. Spurs are now dictating the tempo. Dortmund are hanging on.

Kane picks the ball up inside the area and fires just over the bar, it was a great chance for the England international to grab his second of the night.

Bürki is playing a very high line, he’s almost a central midfielder he’s that high. A cheeky lob could be on if Tottenham spot his positioning.

Toprak is down after Sahin booted the ball in his face from a point blank range! Owwch, the defender looks dazed.

Dortmund get us back underway at Wembley, what will the second half bring? Surely it can’t be as furious as the first!

Wow, what an action packed 45 minutes. Tottenham looked devastating down their left side and punished Bürki twice on his near post. Yarmolenko’s stunner keeps Dortmund in touching distance.

Pulisic finds the net but it’s judged to be offside — The referee blows his whistle, what a half we had here at Wembley

Can Dortmund find an equaliser before half-time? They haven’t sat back to their credit.

Son thinks he’s through, he skips past Bürki but as he heads towards goal the assistant raises his flag — it’s the correct decision. Redemption for the officials!

The officials give a dubious corner to Dortmund after what looked to be a missed header by Yarmolenko, TV replays confirm it was indeed a mistake by the Italian officiating team.

Sokratis escapes an almost certain yellow card after he throws Kane to the ground. It looked more a wrestling move than a tackle. The Dortmund captain is a lucky man.

Aubameyang breaks down the left and tries to pick out Pulisic in the box, the American just can’t get full contact on the cross — Dortmund need to convert one of these chances soon.

It’s Dier who picks up the first yellow of the night, Davies can sigh in relief.

Referee Rocchi gives Ben Davies a ticking off after a late challenge on Piszczek, it’s the Tottenham player’s final warning. He could be the first to see yellow this evening if he doesn’t calm down a little.

Christian Pulisic finds space on the left, drives at Lloris and tries to square the ball to Aubameyang. The outstretched foot of  Sánchez averts the danger, it was a chance! Dortmund need to keep going.

Dortmund are searching for an equaliser, they are finding Tottenham a hard line to play through. Those two uncharacteristic early goals have set a hard target to catch.

1 – For the 1st time Borussia Dortmund conceded 2 goals in the first 15 minutes in the @ChampionsLeague. Chaos. #THFCBVB

After what seems to have been a firework laden opening 20 minutes, the game tempo has dropped a little. Unsurprisingly it would be hard for both sides to cover this massive Wembley pitch with so much intensity without a slight drop in speed. 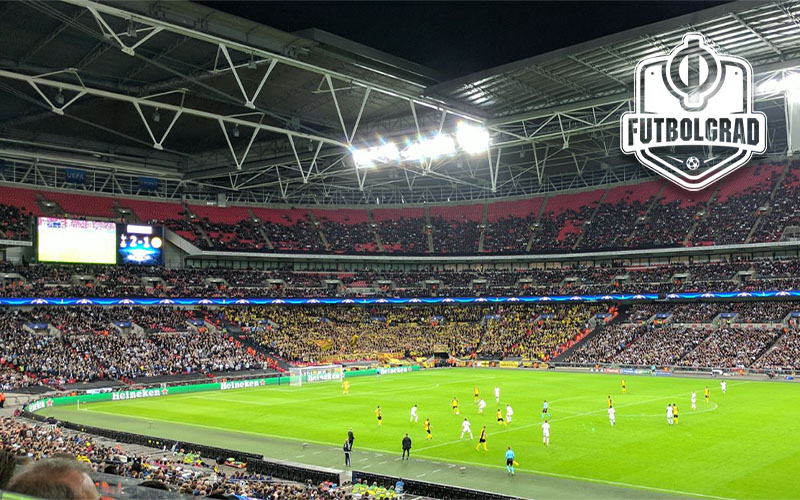 Pulisic cuts inside and tries his luck from 18 yards, it takes a deflection and loops over, the resulting corner is cleared easily.

GOAL: Tottenham 2:1 – Kane breaks down the left and scores an almost carbon copy goal of Tottenham’s first. Bürki will not want to see that again, beaten on his near post he showed far too much of a target to the prolific attacker.

After falling behind, Dortmund are now in the ascendancy — we have a game on our hands now. Dahoud, Sahin and Kagawa looked to have settled.

GOAL: Dortmund 1:1 – Yarmolenko introduces himself to the Dortmund faithful, he lets rip from 18 yards, curling the ball past Lloris, what a goal

Piszczek from the left tries to find Auba in the box, it’s cleared by Sánchez. Dortmund are starting to grow into the game now.

Dortmund are probing, trying to find an immediate response — however, their hosts look comfortable to release possession. The midfield three of the yellow and blacks are struggling to hold their shape.

GOAL: Tottenham 1:0 – Heung-Min Son breaks down the left, carries the ball 30 yards, cuts inside and unleashes a thunderbolt past Bürki

Both teams look to attack from the off. Tottenham are trying a high press on the side that specialise in Gegenpressing!

It’s the hosts that get us underway, Wembley is far from full — which is a shame for such a big fixture

The anthem has been played, we’re moments away from kick-off

30 minutes until kick-off, Tottenham have failed to win any of their last 11 games at Wembley, Dortmund will fancy their chances here this evening, especially with their dangerous front three.

1 – Tottenham have won just one of their last 11 games at Wembley (D3 L7), failing to win any of the last four. Hoodoo. pic.twitter.com/hmDF2fuepl

The lineups are out. It’s a first start for Andriy Yarmolenko as Dortmund are forced to rotate with injuries picked up at Freiburg last weekend. Whilst the hosts, Tottenham name their strongest possible side from those available.

Just over an hour until kick-off and the Dortmund fans have started to arrive.!

So Futbolgrad is in place, Wembley is looking extra special. Tonight’s match has all the ingredients to be a classic, let’s hope there are goals galore. We were treated to an almost perfect display at Stamford Bridge last night, fingers crossed that Wembley offers us the same sort of ride.!