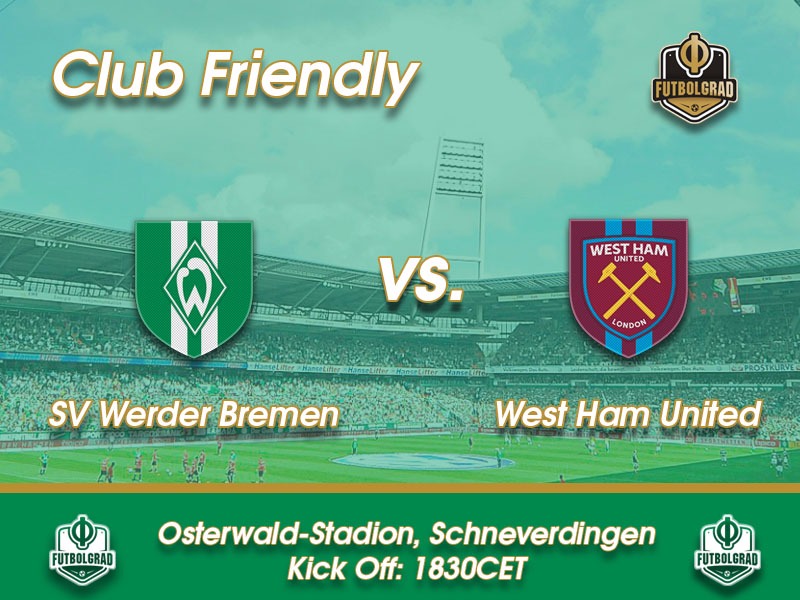 Welcome to the Werder Bremen vs West Ham United Futbolgrad Network Minute by Minutes report. In what should be a highly entertaining friendly at the Osterwald Stadion fans were anticipating the first start for Mexican superstar Chicharito in a West Ham shirt. Javier Hernandez will, however, not feature today and the Hammers’ other new signing Marko Arnautović will start from the bench.

Werder Bremen win the first of two friendly matches. Werder looked much further in their pre-season preparations than West Ham United, who despite having the majority of the possession in the second half lacked the creativity to break down a strong Werder defence.

Can West Ham find an equalizer?

Almost 2-0 for Werder. Verlaat meets a great freekick cross, but the ball just misses the target.

Great combination play by West Ham and Zabaleta looks ready to deliver a cross in the box. The Argentine is offside, however.

Werder’s defence looks very good here. West Ham had just one shot on target. Even more remarkable Werder head coach Nouri has not made a single change at this point.

Ten minutes to go and West Ham don’t look anywhere near an equalizer.

Fire fighter sirens here at the Osterwald Stadion. Just in time too as Werder have a double chance to make it 2-0! Adrian has to pull out a double save to keep West Ham in the game.

More of the same West Ham have more of the ball without creating any real danger. Remarkable Werder have not made a single change yet.

West Ham are now with some more pressure. But Werder are doing well to absorb the pressure looking to hit the Brits on the counterattack.

Marko Arnautović seems over motivated. The former Werder striker hits the ball on net, which is blocked by Verlaat, who then wants to bring the ball out, but Arnautović follows through with a reckless challenge. A dangerous play for what is just a pre-season friendly.

Pablo Zabaleta is another player brought on and the Argentine, who was signed from Manchester City, is making his physical presence felt on the pitch.

Marko Arnautović is announced on the speakers and there are some boos around the ground. Werder fans have not forgotten the diva quite yet.

Robert Snodgrass with a freekick from 28 metres out. But the ball only hit the side netting.

Meanwhile Werder’s Schmidt’s had been down with what looked like a painful injury. Schmidt can continue though.

Mass change here for West Ham who bring on several new players among them Jose Fonte and Marko Arnautović.

First real chance for West Ham! Creswell brings in a corner and Rice gets his head on it. But Michael Zetterer does well to stop the shot.

West Ham’s early offensive is over. Werder are back in control cycling the ball through their ranks.

Bremen finally manage to get out of their own half. West Ham have been relentless early on.

West Ham look improved in the second half. Much more energy and even a bit of anger in this West Ham side now. They must have gotten quite the talking to in the dressing room.

The second half is underway here at the Osterwald Stadion.

And we're off again. pic.twitter.com/vi0aZ45d4V

Werder lead the game after the first 45 minutes. Die Werderaner were by far the better team and dominated West Ham, who did not have a single shot on target in the first half. It will be interesting to see what changes both managers will make for the second half.

Chance for Werder! Niklas Schmidt has the chance from the edge of the box, but his one timer is saved by West Ham keeper Adrian.

West Ham did not have a single shot on target in this half. Werder have done very well to contain the Hammers.

Eggestein with a chance. The young striker, however, does not hit the ball cleanly and the shot is wide over the target.

Mark Noble had to go off with an injury. Slaven Bilić brings on Pedro Obiang. Noble had been one of the best players on the pitch and a major injury would be bad news for West Ham.

Byram drives the ball forward for West Ham and enters Werder box. He then, however, loses control of the ball and the chance is gone.

It is now raining very heavily.

Ulisses Garcia on the left-wing is having a great game for Werder. The Swiss national is showing physical strength and technical finesse to boss his opposition.

Next chance for Werder who break into West Ham’s box with numbers. The ball, however, is cleared.

Next chance for Werder. The ball is brought into the penalty box by Selassie and then is cleared. Jérôme Gondorf waits at the edge of the box and hammers the ball on net. His shot misses the target though.

No Max Kruse today by the way. The German striker is out with an injury. There are still some speculations about his future, but with his exit clause expiring in three days, a move seems unlikely at this point.

Werder are now putting up some more pressure. The Germans are looking fresher and more aggressive on the pitch. Their passes and buildup play is also crisper.

West Ham fans are enjoying the day out in Germany.

Holland and Noble have been the two best players for West Ham thus far. The two have a great combination play at the right side of the pitch, but Werder’s defence remains steadfast.

Werder Bremen have taken the lead! Great buildup play on the left of the pitch and the ball arrives at Johannes Eggestein, who scores with a nice finish that hits the post and then goes in the net.

Game has mostly become a midfield battle at this point. Werder circulates the ball nicely and West Ham is struggling to gain control of the ball from the Werderaner.

West Ham’s Holland tries to push forward on the right side of Werder’s box. He can’t find a way through, however, and Werder can clear the situation.

First chance for Werder. Gebre Selassie escapes the West Ham defence, but cannot control the long ball played to him and his shot misses the target.

Energetic start by both sides here. Both sides are probing the opposition trying to get an early goal in.

The Osterwald Stadion is packed in what is a somewhat grey day here in Schneverdingen.

The game is underway!

Joe Hart and Marko Arnautović are expected to play in the second half. Both are high profile signings and it will be interesting how Werder fans will react to Arnautović in particular.

Five minutes to kickoff. Alexander Nouri gives young Jesper Verlaat the start. The son of former Bundesliga star Frank Verlaat has turned heads during the pre-season and it will be interesting to see him in action.

No Chicharito today. But that is okay. We got everything you need to know about Chicharito here and also on our latest Golazo Podcast!

The lineups are here: