Both sides opted for a controlled approach to start the game. As a result, there were few chances to start the game. Dortmund had the biggest in the fifth minute when Marco Reus missed a tap in from a Jadon Sancho pass. Dortmund had further chances. First, Sancho (28′) missed the goal from a close distance, and then Reus missed another tap-in (29′). Augsburg were more efficient, and in the 34th minute, Florian Niederlechner completed a wonderful counter-attack with a tap-in goal. Dortmund tried to equalize before halftime but lacked the organization to break down Augsburg.

Within 23 seconds of the second half, Augsburg were up 2-0. Manuel Akanji gave the ball away to Marco Richter, who then beat an out of position Roman Bürki with a shot from 35-yards. Dortmund responded, and in the 48th minute, Julian Brandt beat Tomas Koubek with a close-range strike. Dortmund’s celebrations were short-lived because, in the 56th minute, Niederlechner was left open once again, scoring another tap-in goal. Lucien Favre reacted and brought on Erling Haaland, and shortly after, it was 3-2 with the Norwegian scoring his first Bundesliga goal n the 60th minute. Augsburg were caught in disarray, allowing Sancho to make it 3-3 just a minute later. Dortmund were now flying, and in the 71st minute, Thorgan Hazard escaped Augsburg’s defense and set up Haaland for his second. The goal was originally waved off but would stand. Haaland was not done, the Norwegian completing his hattrick in the 80th minute after escaping Augsburg’s defense. 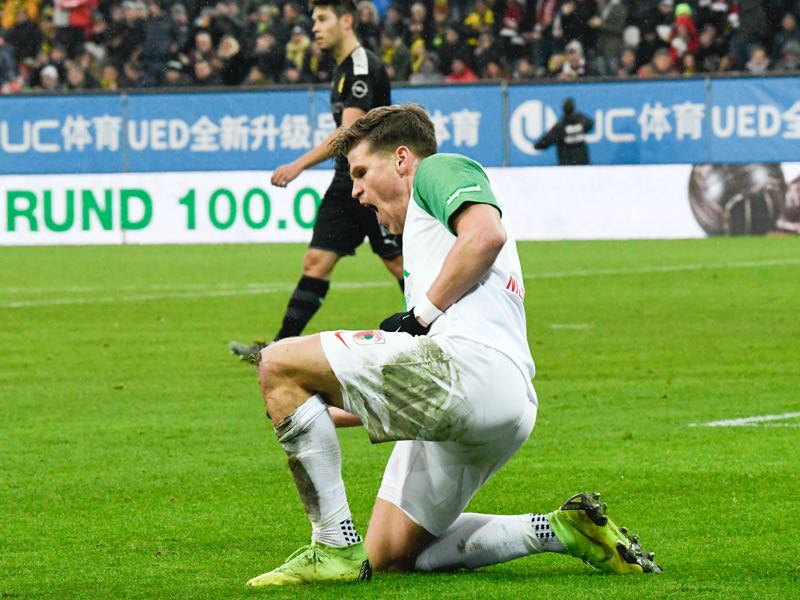 Identified as Augsburg’s danger-man ahead of the match, the native of Ebersberg did not disappoint. Twice Dortmund gave Augsburg’s top scorer to much room and both times he scored. Without a doubt the most efficient player on the pitch at the WWK Arena.

The Norwegian came on when Dortmund were down by two goals. Just moments later it was 3-2. With Haaland on, Augsburg’s defense fell apart. Dortmund quickly found the equalizer and then made it 3-4 thanks to another goal by the 19-year-old, showing that Haaland is already an impact signing for the Black and Yellows. But the Norwegian was not done there, scoring a third to complete his hattrick on his Bundesliga debut.

Sancho was excellent once again. The Englishman scored the equalizer to make it 3-3 and added another assist to his ever-growing scorer tally. With Haaland on the pitch, Sancho finally had a more clear-cut outlet and was also given more space to be more creative.

Dortmund were resurrected in the second half thanks to Erling Haaland and a switch to 4-2-3-1. Yet there are still some worrying signs. The Black and Yellows still lack defensive structure and, in the first half, lacked the organization to dissect Augsburg.

Augsburg, in the meantime, seemed to have the perfect game plan. The Fuggerstädter were efficient on the counter-attack and easily identified Manuel Akanji as Dortmund’s weakness. In the second half, they ran out of steam, allowing Dortmund to come back and win the game.

Loading...
Newer Post
Timo Werner gives Leipzig daylight at the top of the Bundesliga table
Older Post
Who are the main sponsors of football in the South Caucasus?