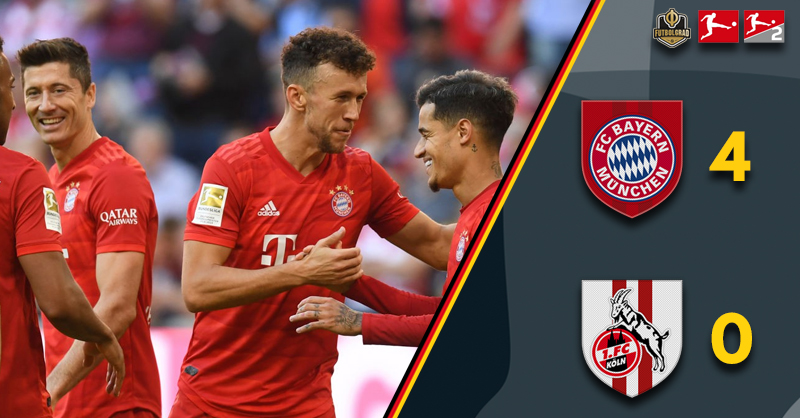 Bayern kick off Oktoberfest festivities with 4-0 win over Köln

Within three minutes, Robert Lewandowski opened the scoring. The striker’s run was picked out by Joshua Kimmich, the Polish striker then poking the ball past Timo Horn. Bayern were dominant, and in the 14th minute, Philippe Coutinho almost doubled the lead with a beautiful freekick from the edge of the box that had Horn beat but hit the post. Bayern were dominant throughout the first 30 minutes but failed to turn that dominance into a second goal with Ivan Perišić (30′) and Serge Gnabry (34′) having opportunities to double the lead. Then just before halftime, Jhon Cordoba broke with pace into the box and his shot had Manuel Neuer beat but zipped past the far post.

The second half started in a similar fashion to the first in that it took just a couple minutes for Lewandowski to score. This time the Polish striker headed home a header from a corner-kick from the right. Then in the 60th minute, Coutinho broke through and was destined to score until he was brought down by Kingsley Ehizibue, who was subsequently sent off. Coutinho had to then step up twice to the spot as his first goal was called back for early encroachment, hot that the Brazilian cared as he scored on the second penalty as well. Then in the 72nd minute, Coutinho was involved once again his pass finding Perišić, who scored his first goal for his new club with a low shot.

Coutinho’s vision really is something. You think he’s going to go/pass one way, and he feints and goes exactly the opposite. It’s much much better than anything you could have remotely imagined. That vision was on display throughout the first 45 minutes only in bits and pieces as he still building the chemistry with striker Lewandowski. In the second half, however, he finally managed to use his vision to deadly effect breaking through the half-lines his run resulted in Ehizibue’s red card and allowed the Brazilian to score his first goal for Bayern.

Robert Lewandowski cannot stop scoring at the moment. The 31-year-old scored a brace tonight and has now scored nine goals in five Bundesliga games this season. Lewandowski carries this team and scores goals at crucial times; the forward scored early in both halves taking the pressure off a Bayern side that at times still struggles in their tactical setup. Lewandowski is a difference-maker not just in the box but everywhere on the field.

Perišić’s performance tonight was a bit overshadowed by the excellent Coutinho and Lewandowski. But make no mistake Perišić was excellent tonight, the Croatian created several dangerous moments and scored a beautiful goal to make it 4-0. His directness and anticipation make him a good depth addition to the squad.

Bayern have ended their Oktoberfest curse against Köln. In the last four visits by the Billy Goats during the festivities Bayern failed to win, that streak ended tonight in what was a convincing performance, especially in the second half. That performance now puts the pressure on Bayern’s competitors RB Leipzig, who will play layer today against Werder Bremen but also on Dortmund, who visit Frankfurt tomorrow.