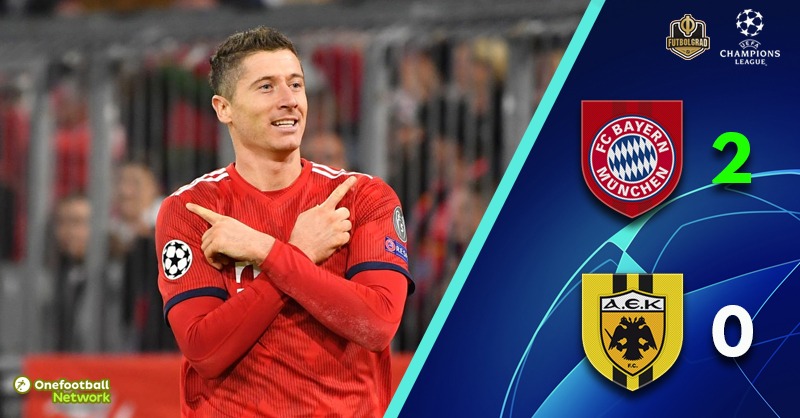 Bayern find some inspiration to beat AEK and advance

Sandwiched between Football Leaks revelations and Saturday’s Klassiker the Champions League match Bayern v AEK Athens almost took a backstage in Munich. But Bayern were focused and determined to end 53 days without a home win by soundly beating AEK 2-0 at home.

Within 5 minutes AEK had the first chance of the game. Vassilis Lampropoulos was left wide open after an Athens corner and keeper Manuel Neuer was lucky that his effort just missed the target. Just two minutes later it was Bayern that produced their first chance with Leon Goretzka forcing keeper Vasilios Barkas with a thundering header from 16 yards out.

It was a wild start to a match that soon ebbed down with Bayern, in particular, having trouble breaking down AEK’s five-man defence. In the 29′ minute it appeared that Frank Ribéry finally found a way through, breaking in on the left his sharp pass into the six-yard box was deflected over the goal by Dmytro Chygrynskiy.

From that resulting corner, however, resulted in a penalty. Robert Lewandowski was brought down inside the six-yard box by Uros Cosic in the 30′ minute, the fouled player then stepped up himself and scored the penalty. Thomas Müller should have doubled it in the 36′ minute, slaloming through Athens defence it was a last minute block by Cosic that kept the midfielder from scoring.

Experience the atmosphere at the Allianz Arena! Book your European football travel now by visiting Nickes!

Athens were able to hang on and rescue the result into the second half. Once there, however, it was more of the same. Bayern were the dominant side but struggled to add to their one-goal lead.

In the 55′ minute Joshua Kimmich sent a great cross into the box where Goretzka managed to unleash a fantastic drop kick, goalkeeper Barkas, however, was once again in position denying the Bayern midfielder with a fantastic stop. Five minutes later it was Lewandowski, who tested the keeper after breaking away but once again Barkas stepped up.

At that stage, it was only a matter of time for Bayern to score their second. Once again it was Lewandowski to the rescue, the Polish striker met a corner with a flying leg spectacular tapping the ball across the goal line from close range in the 72′ minute.

The Bavarians were now rampant, and in the 74′ minute Serge Gnabry escaped his defender but failed to beat Barkas after going one-v-one with the keeper. Then in the 83′ minute, Lewandowski almost completed his hat-trick, but his short-range header only hit the side netting.

Athens then could breathe a big sigh of relief when Lewandowski was withdrawn in the 91′ minute. The Polish striker had done his job scoring two and with Sandro Wagner on the biggest threat for AEK was removed from the pitch as Bayern saw out their 2-0 victory.

Robert Lewandowski was earmarked by the Futbolgrad Network to be the Bayern player to watch. We wrote that Lewandowski needed to find his goalscoring touch for Bayern to refind their magic and the Polish striker did exactly that scoring from the penalty spot in the first half and with a wonderful flying karate kick in the second half. Overall the 30-year-old should have probably have had a third but the hat-trick was not meant to be on a night against a mediocre Athens side. 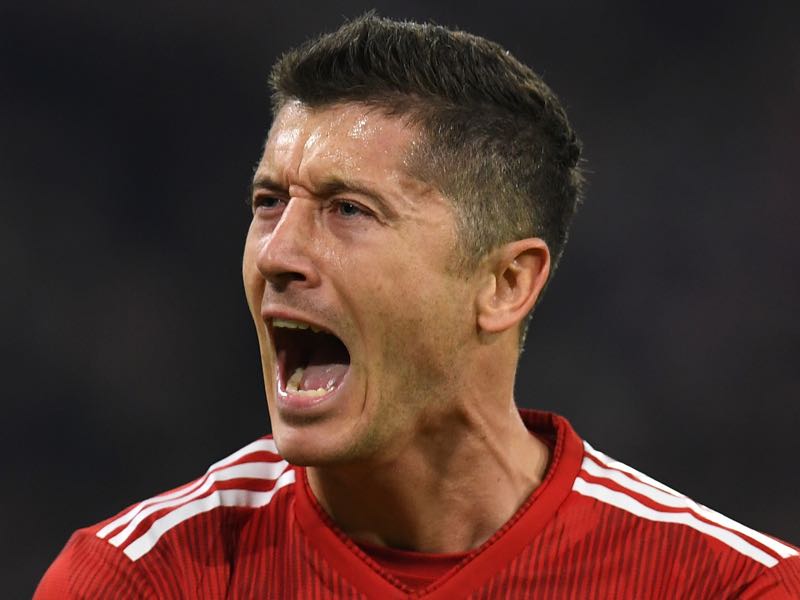 What to make of this performance by Bayern? The Bavarians were dominant against a mediocre Athens side. At the same time, it is the sort of result that you need after having been winless at home in four games. Bayern needed to get the job done and did exactly that scoring two goals and staying tight in the back. Furthermore, Bayern were at times quick and aggressive and could have had three or four in the end. But will it be enough to survive in Dortmund? Dortmund struggled last night against Atlético and ahead of der Klassiker Bayern may have tanked just enough confidence to get a result at the SIGNAL IDUNA Park.