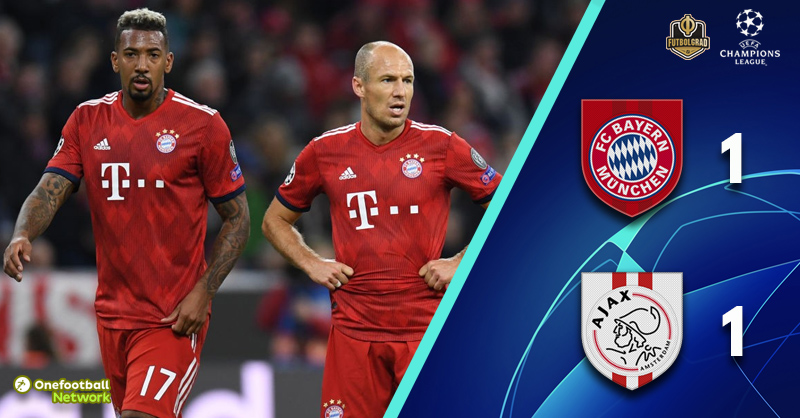 Bayern’s problems continue as they drop two points against Ajax

MUNICH — Bayern v Ajax used to be a duel of giants but everyone expected the Bavarians to blow the Dutch away. But Ajax were excellent tonight and would have deserved more than just the one point.

Bayern were on fire to start this one – playing quickly through midfield it only took three minutes to produce the first chance with Arjen Robben forcing Ajax keeper Andre Onana to make a brilliant save with a curled attempt from inside area. Just a moment later the Bavarians were upfront Robben delivered a perfect cross into the box where Mats Hummels nodded home from close distance to give Bayern the lead in the 5′ minute.

The Germans were relentless in the opening stage right away looking for the second goal. Bayern had 61% ball possession in the opening 15 minutes, a feat against any Dutch side. Ajax, in the meantime, struggled to get out of their half in the opening third of the first half and were barely able to put together a series of passes to get back into the match.

Then in the 16′ minute, Ajax got into the match. Dusan Tadić (16′) missed the net from close-range, and Hakim Ziyech tested Manuel Neuer with a shot from 22-yards (20′). In the 22′ Ajax were level! Tadić dished a beautiful ball to right-back Noussair Mazraoui, who beat Neuer with a close-range effort.

For the third game in a row, Bayern became complacent after taking the lead and once again they were punished. Furthermore, following the goal Bayern struggled to regain composure and only in the 31′ minute did Javi Martínez test Onana with a shot from a distance.

Instead, it was Ajax that could have, perhaps should have, taken the lead. In the 44′ minute Ziyech once again was given to much room and unleashed a shot from 25-yards that forced Manuel Neuer into a wild dive, and the German national team keeper did well to tip the ball over the bar.

Ajax kept the pressure up in the second half, and within minutes it could have been 1-2. Tedić (47′) did not hit the ball right allowing Neuer an easy save. Nicolás Tagliafico (49′) then tested Neuer from a close distance, the German keeper failed to control the ball and then had to risk his neck diving after his dropped ball catching it just in time before three on-rushing Ajax forwards.

More chances followed for Ajax. In the 60′ minute, Donny van de Beek was left open in the area, but his header missed the target. De Beek also had another chance in the 71′, this time he was allowed to break into the box and only had to beat Neuer, but his close-range effort missed the target.

And Bayern? The Bavarians struggled to assert their dominance. Their only chance at this stage came in the 67′ minute. Thiago was allowed the space to produce a shot from 22-yards out that missed Onana’s goal by just a whisker.

Bayern’s biggest problem at this stage? Speed. The Bavarians could not find the tempo to break down Ajax. An issue that was not helped when head coach Niko Kovac opted to replace Robben with James in the second half. It was a mistake that Kovac tried to rectify by bringing on Serge Gnabry for Ribéry in the 74′ minute.

Gnabry then broke into the area in the 77′ minute played a low pass to James, who was free just off the penalty spot, but his shot was directed around the post by goalkeeper Onana. But it was Ajax with the final chance of the game.

De Godezonen were awarded a free kick from 30-yards out. Lasse Schöne lined up for the shot and hammered the ball on goal where Neuer had to stretch to direct the ball onto the crossbar.

Dusan Tadić was the man of the match. Erik ten Hag surprised observers by fielding Tadić upfront instead of striker Klaas-Jan Huntelaar. But with his speed, he caused several problems for Bayern’s defence and assisting Mazraoui’s equaliser in the first half. The striker also completed 83.3% of his passes and played three key passes. 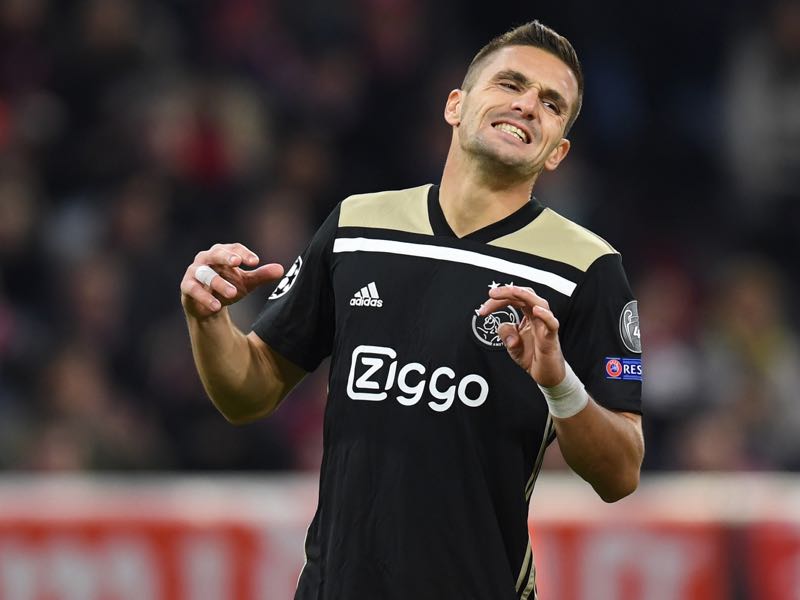 Bayern have a tempo problem similar to German at the World Cup. For the third time in a row Bayern went into a game aggressive but then started to lose their speed as the game progressed. Furthermore, similar to Augsburg a week ago Bayern seem to be unable to cut out their lethargy as the game progressed. A phenomenon that was made worse by Kovac taking off Robben for James. Given the last three matches the question has to be asked: have Bayern been found out?