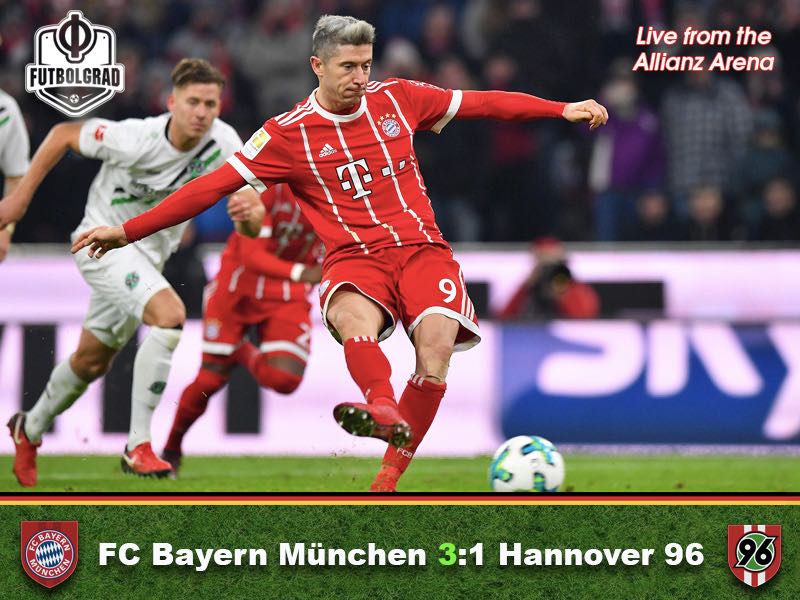 After a 2-1 defeat against Gladbach Bayern bounce back with a win winning the match Bayern v Hannover 3-1 on Saturday afternoon at the Allianz Arena.

Bayern began the match with Thomas Müller, Kingsley Coman and James Rodríguez back in the line-up. The return of the three attacking players gave Bayern more width from the start and within seven minutes Arturo Vidal, three times and Robert Lewandowski had missed clear chances for an early go-ahead goal. At this point, Hannover were lucky that it was still 0-0. Die Roten were sitting too deep in their half attempting to hit Bayern on the counter, but der Rekordmeister was relentless and in the 12th minute Thomas Müller was through, and it was only thanks to an excellent Philipp Tschauner that the score remained tied.

With 17 minutes gone Bayern finally broke the deadlock. Arturo Vidal got at the end of a long and wide Müller cross that just about beat Tschauner to give the Bavarians the deserved lead. Only a few moments later Bayern almost had a second after Rafinha stepped inside the box and managed a low curled drive on goal, which was well stopped by Tschauner. Bayern’s top scorer Lewandowski was more efficient in the 24th minute converting a cross by Thomas Müller—at least that is what everyone in the stadium thought, but the goal was taken back after referee Guido Winkmann was informed about an infraction. It was an unlucky moment for Bayern, which was made up for when Winkmann decided to leave Bayern keeper Sven Ulreich on the pitch after he fouled Niclas Füllkrug. Füllkrug converted the penalty, but Winkmann agreed that the spot-kick had to be repeated after a Hannover player entered the box too early. Ulreich then saved the second penalty and Mats Hummels, who had entered the box early, managed to clear the rebound.

Bayern recovered well from the penalty and Lewandowski should have made it two after he broke through and went one against one against Tschauner. His shot was off target, however. But in a moment in which it appeared that the football gods were once again smiling kindly on the Allianz Arena Hannover equalized when Charlison Benschop headed home a corner kick in the 35th minute. Following the equaliser, Bayern pressed for a second goal and should have had one when Müller received the ball inside the six-yard box, and it was only thanks to Tschauner that the teams went into the dressing rooms on equal footing.

Bayern started the second half the way the ended the first with plenty of pressure. In the 51st minute James’ curled effort just missed the goal, in the 52nd Kingsley Coman, failed to get past Tschauner in a one-against-one situation, in the 53rd James’ shot from distance hit the crossbar and then in the 54th minute several Bayern players failed to get the ball across the line after a skirmish in the penalty box. At that point, it should have been perhaps 3-1 or 4-1 for Bayern, but former 1860 München keeper Tschauner had the game of his life, and he made the next stop in the 63rd minute after a close-range header by Corentin Tolisso.

F0ur minutes later Bayern scored. Coman received a long ball inside the box, but instead of the dropkick stopped the ball side stepped keeper Tschauner and hammered the ball under the crossbar. Bayern then proceeded to control the game waiting for Hannover mistakes and Lewandowski almost benefited after Coman won the ball and served a fantastic cross into the box that the Polish striker just about missed. The game then calmed down significantly, and it was only in the 87th minute that Bayern fans had something to celebrate. Kingsley Coman was brought down inside the penalty box, and Lewandowski made no mistake from the penalty spot to score his 14th goal of the season.

Philipp Tschauner was the player of the game. The former 1860 keeper enjoyed his return to the Allianz Arena making two key stops and nine saves overall. Tschauner kept his side in the match and was the only reason Bayern did not win this game by a higher margin.

Hannover’s penalty in the first half was the most significant talking point after the match. The referee could have sent off Bayern keeper Ulreich for his foul on Füllkrug. The retake decision was also debatable as Mats Hummels appeared to have entered the box early on the second attempt, which allowed him to make the key challenged that prevented Füllkrug from scoring on his own rebound. 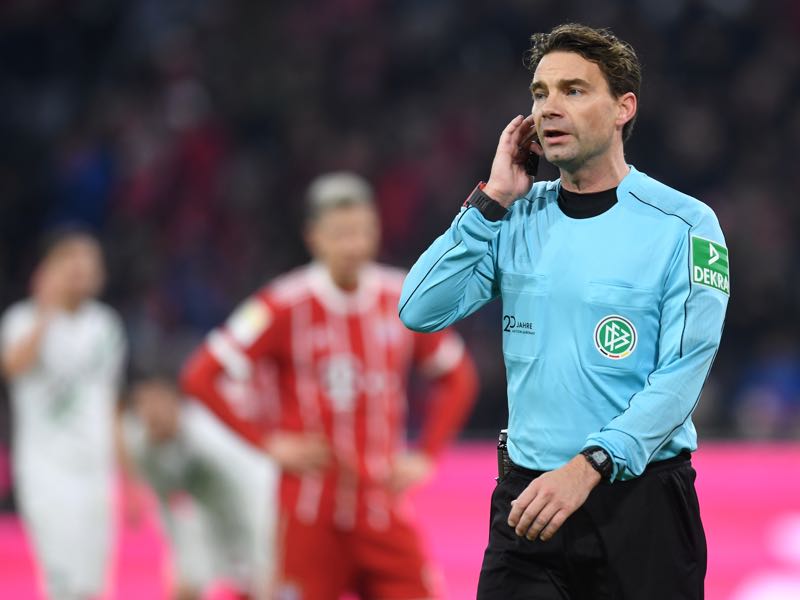 Bayern v Hannover – Referee Guido Winkmann’s decisions was the centre of many discussions following the game at the Allianz Arena. (CHRISTOF STACHE/AFP/Getty Images)

Jupp Heynckes: “I saw the first half the same way as my colleague. We had good chances in the first half. Hannover was well organised. They operated well with long balls, which we struggled with. If we focus more on the second half and if we stand better in our defence we would do better. We had a handful of chances, and I think we deserved the victory. I think we deserved to win the game against a team that made our lives uncomfortable. It is too bad we didn’t score more often, but I am happy. Thomas Müller and Kingsley Coman are back. Jérôme Boateng is returning to form. Therefore I am optimistic about the coming games.”

Heynckes on Müller and Javi Martínez: “Thomas had a good week at practice. But he is not quite as efficient in front of the net. But he will get there. Javi Martínez always played centreback before I arrived and it is more strenuous to play in midfield. I felt he was not as fit today as he usually is and therefore I took him off.

Heynckes on Coman: “The question about Coman shows that you want to hear something positive. He was well rested as he couldn’t play for two weeks. I was able to train this entire week, and he played well and scored the 2-1. His runs require plenty of fitness, which he got now.”

André Breitenreiter: “Congratulations to Bayern München. I thought we played alright and we were well organised. But we were not efficient enough in our transition game. But we did well after the chaotic two minutes. Unfortunately, the first penalty did not count. It was of course within the rules not to count the first penalty. But I am going to follow future games and see if the referees will always make their decisions this way.”

Breitenreiter on Benschop: “Charlie has trained well, and he deserved to play today. He had some good moments, and he scored a wonderful goal. It was an important moment for him.”