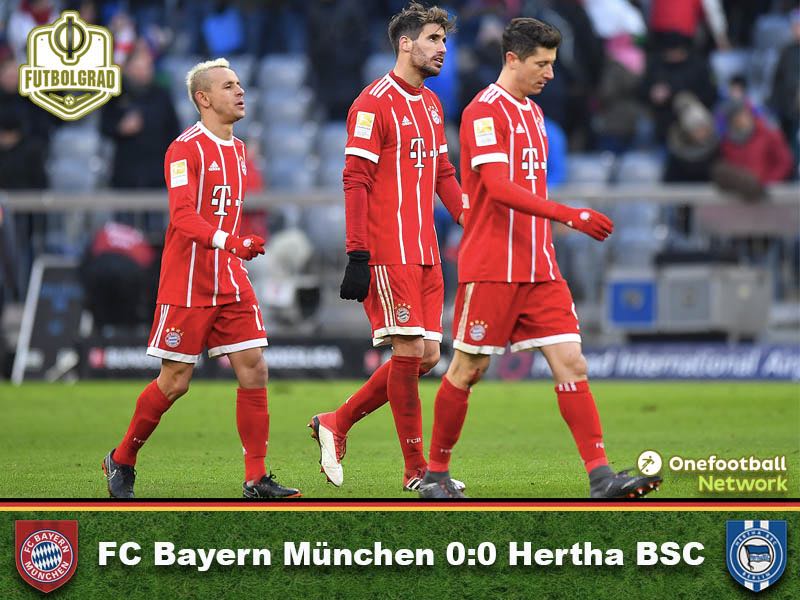 Bayern vs Berlin was a lacklustre affair. Bayern seemed tired from their midweek game, and Hertha were happy to sit deep to collect a point in the Bavarian capital.

Bayern took this game straight to Hertha Berlin with Robert Lewandowski almost finding the lead after a great cross from David Alaba, but his header from just a few yards out was well handled by Hertha keeper Rune Jarstein, who kept the ball out. It was a bit of a flat performance by the Bavarians, who seemed to have some heavy legs from the midweek 5-0 victory against Besiktas. It was not until the 17th minute that Bayern had their next glimpse of goal with Lewandowski escaping his defender Jordan Torunarigha, Jarstein, however, came out of his net and beat the Polish forward in the one-on-one situation.

Hertha in the meantime were solid in the back sitting deep absorbing Bayern’s pressure without contributing too much to the game. Overall it was a typical performance by the club from the capital. Often accused of playing boring football Hertha did very little to debunk that myth on Saturday afternoon. Pal Dardai’s side certainly works hard, but there is little to no creativity in that team. It did not help that Bayern were lacklustre themselves that evening but in the 36th minute, Arjen Robben spotted Frank Ribéry, who had escaped Hertha’s defence and went one-on-one with Jarstein. Ribéry, however, skied his shot from just a few yards out in what should have been the lead for Bayern. Overall it was a flat performance by both sides in a game with few highlights in the first 45 minutes.

Peter Pekarik and Hertha were solid in the back. (GUENTER SCHIFFMANN/AFP/Getty Images)

Bayern continued to be the team trying to make something happen. In the 49th minute, Robben was brought down outside the box and Jarstein had to do very well to keep out a fantastic Alaba free-kick. Bayern also had the next chance of the game in the 55th minute it was Lewandowski, who broke through Hertha’s defence the Polish international, however, placed his close-range shot right into the arms of Jarstein.

Both sides continued to struggle to find a goal as the game approached the final 20 minutes. Bayern head coach Jupp Heynckes reacted and brought on Kingsley Coman and Sandro Wagner for Ribéry and Thomas Müller in an attempt to jump-start his side. For the first time in the Bundesliga Bayern would field Lewandowski and Wagner together. Berlin finally opened up a bit with just seven minutes to go with Valentino Lazaro breaking forward slaloming through Bayern’s defence, but his shot from nine-yards out was right on Bayern keeper Sven Ulreich. It was the only chance created by Hertha in the second half in a game in which the club from the capital was well organised in the back without being overly creative. It was a tactic that worked in the end as Hertha walked away with a point from the Bavarian capital even though Jarstein had to do well to keep out a fantastic free-kick by Robben in the 90th minute.

Bayern vs Berlin – Man of the Match

Jordan Torunarigha was excellent for Hertha. The 20-year-old central defender was flawless against Bayern on Saturday. He had eight clearances, three blocked shots, five interceptions, four tackles and won four out of his five duels.

Jordan Torunarigha, here against Müller, was excellent for Hertha on Saturday. (Photo by Sebastian Widmann/Bongarts/Getty Images)

Hertha cannot escape their stigma of being boring. The club from the German capital is one of the clubs in Germany with the most significant potential. But Pal Dardai’s football seldom gets Bundesliga fans excited, and as a result, Hertha are the grey mouse of the Bundesliga.