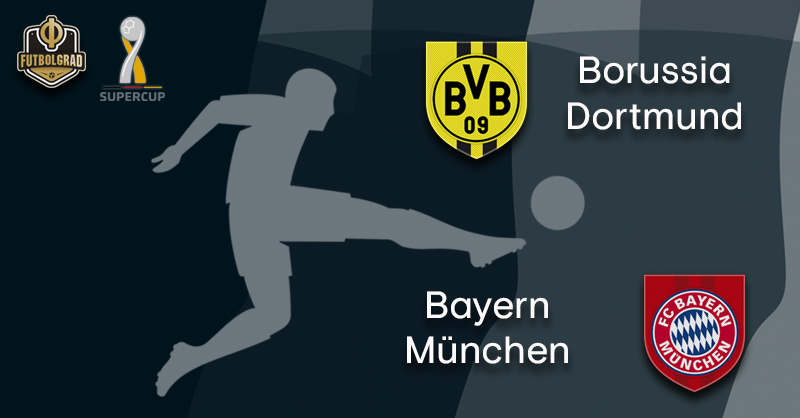 Borussia Dortmund vs Bayern München will take place at the SIGNAL IDUNA PARK in Dortmund. (Photo by Maja Hitij/Bongarts/Getty Images)

The DFL Supercup signifies the opening to a new season in the Bundesliga, and once again its two most famous clubs will battle it out to claim the first trophy on offer. Borussia Dortmund vs Bayern München in what is fast becoming an annual cup event between the two sides.

Dortmund start the new campaign full of anticipation, last season’s runners-up could (and possibly, should) have won their eighth top-flight title – instead, it was Saturday’s opponents who registered a 28th Meisterschale, their seventh straight championship.

The renewed vigour of die Schwarzgelben comes from their wonderful summer of transfers. Christian Pulisic departed for his full-time move to Chelsea – in came Julian Brandt, Thorgan Hazard, Nico Shultz and Mats Hummels, while Paco Alcácer formally joined after his season-long loan.

To put it quite frankly, Dortmund have strengthened tenfold – and with it, their chances of toppling Bayern next May have done so as well.  Lucien Favre was afforded some leeway last year with an embryonic squad and changing of tactical systems, this season he has been phenomenally backed by the Borussia board and their expectations will be aligned as such.

Bayern, by contrast to Saturday’s opponents, have had their season of speculation drag over to into a new campaign. Pressure on head coach Niko Kovac is relentless – despite securing a league and cup double in his first season with the club.

Transfer woes also continue to be a thorn in the side of the Bavarian giants. A very public chase of Chelsea’s Callum Hudson-Odoi looks to be over, as does their on / off deal with Manchester City star Leroy Sanè – however, which way the deal falls is anyone’s guess.

Rumours of a completed negotiation and imminent deal surfaced on Thursday evening before Bayern themselves shut it down. Taking to Twitter the club posted “News reports made today stating that Leroy Sané has decided to join FC Bayern do not correspond to the facts”.

Kovac could be without two key assets for the season-opening clash, Serge Gnabry is doubtful to make the game while Kingsley Coman is declared fit, but not without problems. The winger left the pitch in discomfort during Wednesday’s Audi Cup Final against Tottenham.

It could though, all be taken in Bayern’s stride. Talk of a crisis was constant before the two clubs met in Spring – with the Munich side answering their critics thanks to a 5-0 demolition of Favre’s yellow and blacks.

Borussia Dortmund vs. Bayern München – Players to look out for:

The 19-year-old is arguably the face of the league currently after a wonderful breakout season saw the teenager top the assist charts – rewriting the Bundesliga record books en route to his 17 assists from 34 games.

Wowing those on the sides, the Englishman is adept at taking the attack to Dortmund’s opponents. His frightening pace is matched by his ability to pick out a finely threaded pass – ultimately leading to a goal.

He’s also not bad at finding the net himself, with 13 goals across three competitions last season it is not just the Bayern defence who should be paying particular attention to the forward on Saturday.

Jadon Sancho was the most prolific assister in the Bundesliga during season 2018/19. (Photo by Matthias Hangst/Bongarts/Getty Images)

Forty goals in 47 games last season speaks for itself, as does his relentless acquisition of the Torjägerkanone. The 30-year-old picked up his third top scorer award in four seasons. – if you were to look up prolific striker in a footballing dictionary, the Polish goal-getter would be the goto definition.

Having briefly flirted with a move away from the Allianz Arena, he was told that the exit door was firmly shut – and for good reason. The striker has 191 goals in 242 appearances for Bayern and he particularly likes scoring against his old employers – Dortmund have felt his wrath 11 times over the 14 occasions he’s faced them since his move in 2014.