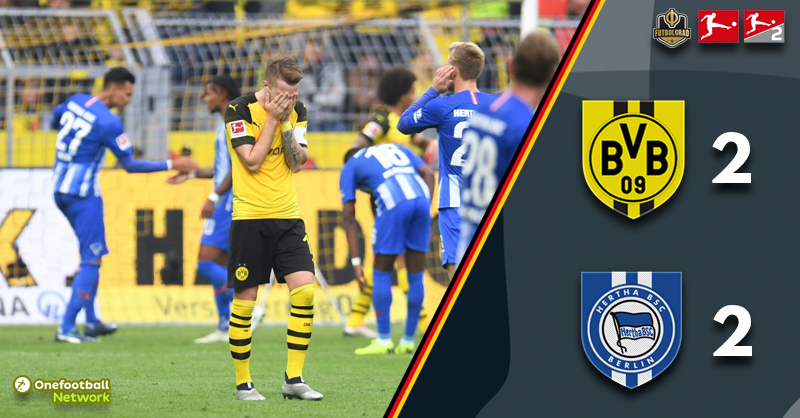 Eighty thousand people packed into the Westfalenstadion on Saturday afternoon as Borussia Dortmund vs Hertha BSC ended in a thrilling two-two draw. There will though, be a feeling of two points dropped for the home faithful.

Borussia Dortmund started this fixture in the same manner they finished their last. A blisteringly quick attack saw Jadon Sancho almost open the scoring after just three minutes. The 18-year-old saw his shot blocked inside the box after Marco Reus had picked him out.

The early attack set the tempo for the opening half hour. Achraf Hakimi  was the next to go close for the home side before Dortmund thought they had their opening goal – VAR adjudged Sancho to be offside, but the winger was not to be denied a goal for long.

Dortmund’s free flowing movement was eventually rewarded on 27 minutes – the English starlet the centre of attention again. Sancho’s right footed shot nestled in the corner of the net after Mario Gotze had the vision to give him opening he deserved.

Hertha for their part, were just about keeping their heads above water in a game that was beginning to slip away from them. However, Pál Dárdai’s men found some much need collective inspiration and they flipped the half on its head just when it seemed beyond them.

Ondrej Duda the first to test the BVB backline, it was a warning Dortmund didn’t heed and just sixty seconds later Hertha had an equaliser.

Maximilian Mittelstädt latched onto a loose ball and countered with the type of speed that undid Bayern München a few weeks previously – Salomon Kalou, in acres of space, placed the ball under an advancing Roman Bürki – Die Alte Dame had an equaliser just as the first half drew to a close.

Football has an old saying that it is a ‘game of two halves’ – this particular fixture went against the grain of the historical quote. The second half replicated the one before it. If Dortmund felt frustrated at the break, come full time they looked dejected as two points slipped through their grasp.

All looked rosy when Jadon Sancho made it two-one, the Englishman directly involved in ten goals now this season – scoring four and assisting a further six.

However, in a carbon copy of the first half Hertha dragged themselves back into contention. Kalou equalising again, this time from the penalty spot after Dan-Axel Zagadou brought down Davie Selke with 90 seconds of the game remaining.

The Dortmund defender had a fabulous match overall but will rue his challenge at the death. Panicked after Selke got the wrong side of him, he clumsily brought the Hertha forward crashing to the ground.

The visitors had rescued two points from a game that should have been way out of their reach, Dortmund guilty of missing a number of cast-iron chances to put the game to bed.

The 18-year-old has fast become a fans favourite in Dortmund and it comes as no surprise. His raw talent and energy is breath-taking to watch – his ability to temper it with real quality is fast marking him out as a superstar in the making.

Substituted with ten minutes remaining it was his absence that slowed down the Dortmund tempo and eventually let Hertha back in. 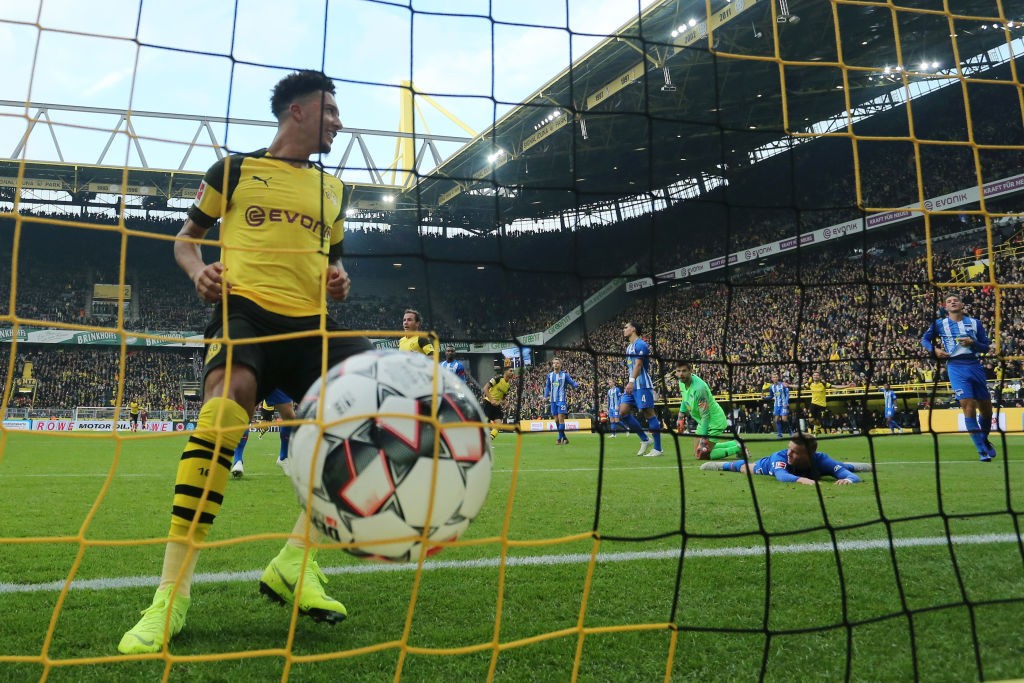 Jadon Sancho celebrates after scoring his team’s second goal during the Bundesliga match between Borussia Dortmund and Hertha BSC at Signal Iduna Park on October 27, 2018 in Dortmund, Germany. (Photo by Christof Koepsel/Bongarts/Getty Images)

Lucien Favre’s post match comments summed up the fixture to a tee: “We had several chances to make it three-one but unfortunately for us it did not happen. In the end it was a small mistake that cost us but that is football” he said.

After a jaw dropping win midweek in the Champions League there will be a crash back down to earth with this result. However, Dortmund’s play remains fast, fluid and attractive but they will need to make sure chances are taken if they want to dethrone Bayern as champions come May.