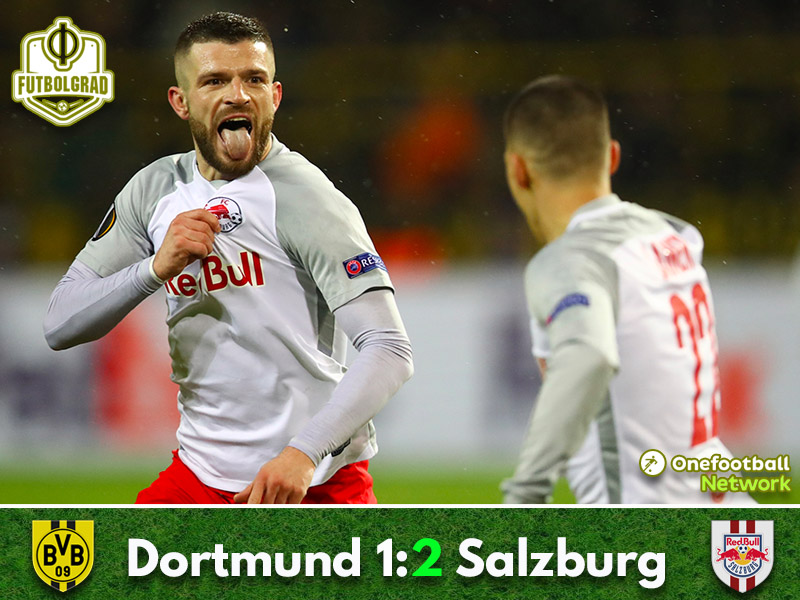 Borussia Dortmund vs Salzburg ended with a major surprise as the Austrian side managed a surprise 2-1 victory to secure their first ever victory on German soil.

It was an entertaining start to the game with Salzburg playing not unlike RB Leipzig on Saturday pressuring Dortmund into their half. Dortmund in the meantime tried to control the game by keeping possession. Even though Salzburg looked the more dangerous side to open the match, it was Dortmund, who had the only chance in the early goings of the match. In the sixth minute, André Schürrle hammered a volley from 12-yards out over the goal following a corner kick by Marco Reus.

It was the only time either team would appear dangerous in front of either goal in the early goings. Despite the lack of chances, it was an interesting game between two different philosophies – with Dortmund maintaining control and Salzburg trying to find space on the counter-attack. The tactical approach by both sides meant that the game was almost at a deadlock with BVB probing and testing and Salzburg patiently waiting for a break that could allow them to score the opener.

With the two teams eyeing each other looking to break the deadlock it was almost Salzburg, who took the lead just before halftime. In the 40th minute, Xaver Schlager found a running Hee-Chan Hwang, who failed to beat Bürki on the one-against-one and Manus Dabbur then failed to put in the rebound as Marcel Schmelzer raced back to clear the ball before the line. The chance set of a period of pressure in which Salzburg tried to go for the lead and Hwang hit the post just before the halftime sounded.

Right after kickoff to the second half Salzburg were given a penalty. Ömer Toprak held on to Hwang in what appeared to be a foul that started outside the box. Dortmund felt somewhat aggrieved over the penalty decision, but Salzburg’s Valon Berisha did not care and converted the penalty. The goal empowered Salzburg, and in the 55th minute Salzburg were up by two after Berisha was completely left alone inside the box smashing the ball home for his second of the night.

Dortmund were only shocked briefly. Head coach Peter Stöger made two changes following the goal taking off Michy Batshuayi and Mario Götze bringing on Christian Pulisic as well as Maximilian Philipp in the 60th minute. Two minutes later Pulisic then had an instant impact running down the right flank crossing the ball to the centre he found Schürrle, who forced the ball into the net.

Dortmund were now pressing, and in the 75th minute Schürrle found himself wide open inside Salzburg’s box and attempted to curl a shot past Salzburg keeper Alex Walke, but his effort was just wide. It should have been the beginning of a BVB onslaught, but instead, the Yellow and Blacks lacked the creativity to break down a well organised Red Bull side that is now taking a big result back to the Mozartstadt for the second leg of the match, which will take place next week.

Borussia Dortmund vs Salzburg – Man of the Match: Hee-Chan Hwang #19

Despite the two goals by Valon Berisha, it was Korean Hee-Chan Hwang, who was the player of the game. The 22-year-old made countless runs down the right wing and created the penalty for Salzburg. His work rate meant that Dortmund were never able to get into their game and was fundamental for a famous Salzburg victory. 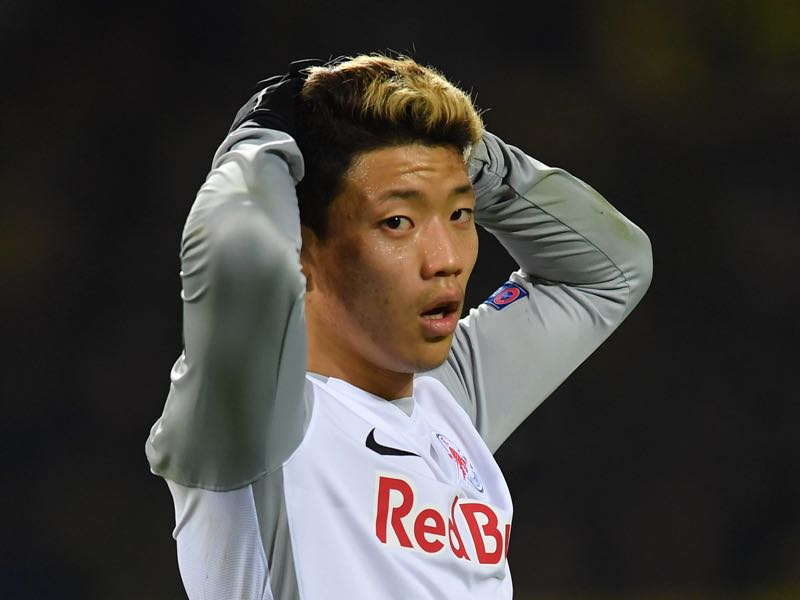 Borussia Dortmund vs Salzburg – Korean Hwang was the player of the match.(Photo by Stuart Franklin/Bongarts/Getty Images)

For the first time, Salzburg have won a match on German soil. It is in some ways a fantastic result for a side that had to come to terms with playing second fiddle to their sister club RB Leipzig in recent years.