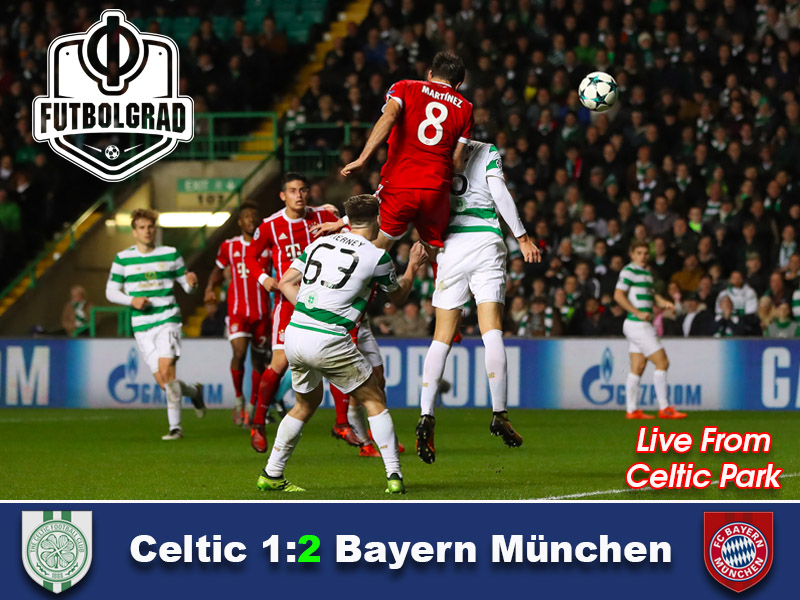 Bayern were given the spooks by Celtic, but in the end the Bundesliga champions avoided a Halloween night horror show in Glasgow. Riding their luck at times the Bavarian’s only needed the sight of goal twice to punish their hosts. After a long week of football versus RB Leipzig, this fixture — at the home of the 1967 European Cup winners — was probably not what Jupp Heynckes would have wished for. However, his reinvigorated side achieved the necessary outcome and booked their place in the knock out stages of the Champions League with a 1:2 victory on a wet and windy night in Scotland.

Bayern almost fell behind in the opening moments, James Forrest fizzed the ball into Stuart Armstrong on five minutes but the Celtic midfielder could only steer the ball wide of Ulreich’s post – it set the tone for the remainder of the half. Just ten minutes later and the hosts had another good opportunity to break the deadlock, this time Dembele charging on the counter but the Frenchman couldn’t get his shot off cleanly – the warning signs were there for Bayern to see, Celtic’s frenetic pace had them rattled. The Bundesliga champions however, are renowned for soaking up pressure and hitting their opposition with a hammer blow – this they did on 22 minutes. Calamity reigned amongst the Celtic backline and Kingsley Coman took full advantage, skipping past Craig Gordon the Bayern makeshift attacker calmly slotted the ball past two defenders to give Die Bayern a lead against the run of play. Celtic were not to be disheartened, again they threatened the German goal — two good chances inside six minutes were wasted and as the half time whistle approached it was Bayern’s Tolisso who struck a shot that just sailed over the bar. Bayern may have been in the lead as the players departed for the interval, but they had been given the run-around by their hosts at times.

The second half started as the first ended – Ulreich called into action on 49 minutes, Bayern’s stand-in ‘keeper pulled off a tremendous reactionary save to deny Armstrong a quick Celtic response. Composure eventually returned to the side in Red, and as the game entered the midway point of the second half it was Jupp Heynckes’ Bayern who began to control the tempo. However, just as Bayern seemed to be dictating the play their Scottish opponents grabbed a lifeline. The very impressive Forrest found McGregor, and the midfielder expertly slotted the ball under Ulreich – cue the madness inside Celtic Park. If Bayern had a game plan to try and keep the Parkhead faithful quiet it had just failed, the home fans went wild and a cauldron of noise erupted. It seemed to be the impetuous that Bayern needed, they quickly shifted up a gear and it took just three minutes for them to recapture the lead — Javi Martinez threw his head into a situation many would have shied out of — his towering header deflated the Glaswegians and ensured the Bundesliga champions were able to hold on for a hard-fought victory.

Man of the Match – Kingsley Coman 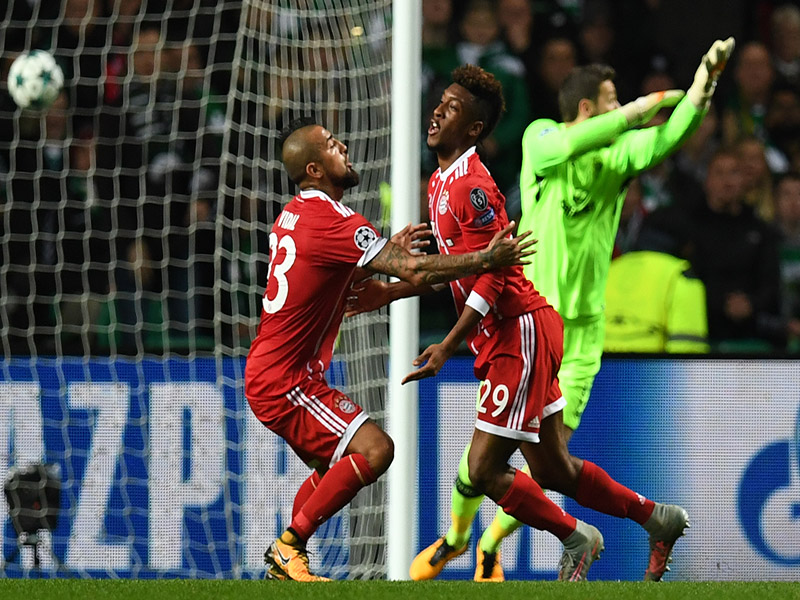 The 21-year-old Frenchman had massive boots to fill with the absence of Robert Lewandowski, and fill them he did. His composure remained steadfast as the Celtic defence and goalkeeper panicked, slotting the ball home after 22 minutes he broke the deadlock at a time when Celtic were looking the most likely to score.

Javi Martinez’ brave header came at a crucial time — just three minutes after Celtic had fired in an equaliser. McGregor’s goal lit the fuse inside the stadium and the atmosphere became electric. Putting his head on the line for the Bavarian’s, Martinez ensured a dampener was put on the Celtic celebrations almost as quickly as they started.

Chris Williams is a freelance European football journalist. Covering the Bundesliga, Premier League and both of UEFA’s European club competitions. Published in both local and international publications he also contributes to television and radio across the globe. A member of the UK’s Sports Journalist Association and the International Sports Press Association (AIPS) he lives and breathes football. Follow Chris Williams on Twitter @Chris78Williams