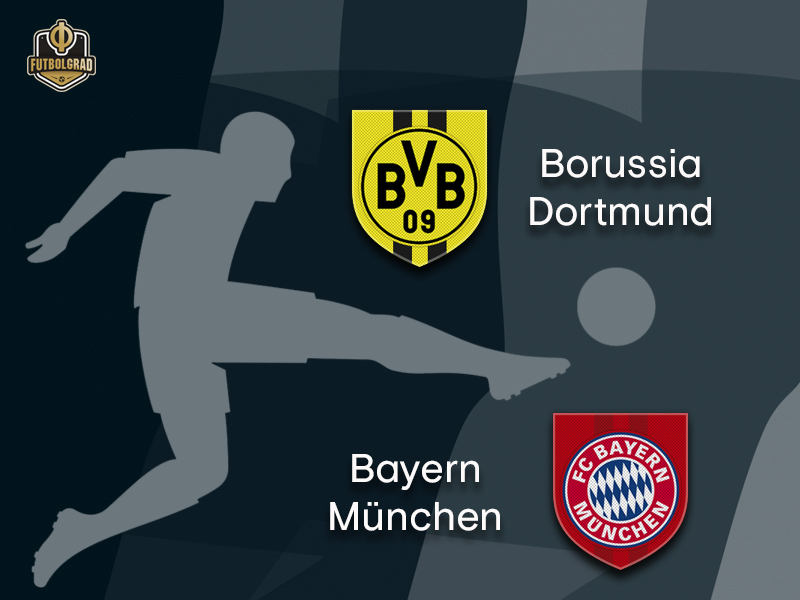 For years the marketing department at the Bundesliga has tried to stylise this game as something special. The equivalent of the Clasico in Spain between Barcelona and Real Madrid. The German Clasico was one term used another has been der Klassiker.

Der Klassiker, so the consensus has been the more fitting of the two terms. Although technically speaking there are two reason der Klassiker is, strictly speaking, not the right term to describe the match between Dortmund and Bayern either. First, der Klassiker was the description used for Bayern’s rivalry with Gladbach and second, for most of the last six years, Dortmund were light-years behind Bayern to truly make this game a truly meaningful game.

“For the first time in forever, this feels like a meaningful game again,” Jonathan Harding said on the recent Futbolgrad Network Gegenpressing Podcast. A fantastic start into the season by Borussia Dortmund with just one defeat in the first 16 competitive games has many neutral fans in Germany hopeful that after six years Bayern’s dominance over the Bundesliga could be broken.

The last 12 games saw Bayern go into this fixture in first place in the Bundesliga standings. The last time Dortmund were first ahead of a Klassiker was in 2011/12. Ultimately, Dortmund would win that match and defend their Bundesliga title for the second year in a row. Furthermore, no matter what will happen on Saturday night at the SIGNAL IDUNA Park Dortmund will remain in first place.

A victory by Dortmund, however, would be a significant signal to Bayern and the rest to the league and determine the Black and Yellows as the favourites to win the title. The overall form by Dortmund this season suggests that this will be the case, but there are also significant question marks stemming from BVB’s last two competitive games.

Last weekend Dortmund managed a bore 1-0 victory against Wolfsburg and overall were perhaps lucky to win that game. Then on Wednesday the Black and Yellows were truly outclassed in their 2-0 defeat to Atlético Madrid. “Perhaps it was a good thing that we weren’t successful,” BVB CEO Hans-Joachim Watzke suggested after the game against Atlético “it sharpens the senses for the game on Saturday,” he added.

Sebastian Kehl, BVB’s player’s licence department director, did not think that the result “would influence” the game on Saturday. “We have good reasons to be confident,” sporting director Michael Zorc added. The last-minute victories against Augsburg and Leverkusen, in particular, have given Dortmund the necessary confidence to think that they can be successful on the weekend.

Bayern, in the meantime, hope for the big turnaround. Ever since the last minute, the 1-1 draw at the Allianz Arena in September the typical self-confidence, that famous Mia-san-mia (we are who we are) attitude has been drained from Bayern’s performances. That result against Augsburg brought in a four-match home series, which lasted 53 days, in which Bayern could not win at the Allianz Arena.

On the road, things have been slightly better, however. Bayern managed victories against Wolfsburg, Mainz and in Athens against AEK. Off the pitch, Bayern’s CEO Karl-Heinz Rummenigge and Uli Hoeneß were heavily criticised for lashing out against the press and former players. Designed to show strength Rummenigge and Hoeneß if anything showed how fragile, and insecure, the current Bayern setup is in what has now been deemed a legendary press conference by the bosses.

Those bosses now hope that Bayern will have gained some confidence after finally securing a home win against AEK at the Allianz Arena. Athens are not the benchmark for the Dortmund game, but while not everything was perfect for Bayern, the Bavarians seemed somewhat improved from their previous performances.

A win is a win, and Bayern now travel to Dortmund having tanked some confidence, whereas Dortmund have to show that they can bounce back from their first defeat. As for the squads, there are significant question marks on both ends of the pitch.

Bayern have lacked speed and quickness ever since Corentin Tolisso and Kingsley Coman have gone down with injuries. The absence of Thiago will further slow down Bayern’s decision making in the final third – when fit the Spaniard is one of the best players in the league, and neither Renato Sanches or James have the quality to replace him.

The absence of Thiago, in particular, is good news for Dortmund, it will give more freedom to midfield enforcers Thomas Delaney and Axel Witsel to fill holes at the back that will be created in Abdou Diallo’s absence. Signed from Mainz this summer Diallo has been one of Dortmund’s key players this season in defence and also in the quick transition game from the back. Dan-Axel Zagadou is expected to play in his stead. The Frenchman was excellent in the first leg against Atlético but despite his potential Zagadou is not on Diallo’s level yet.

“I am not happy with the season thus far. BVB play well but not well as we could. If Dortmund finish first I am the first who will congratulate them. We will give everything until that happens. I don’t think we will lose on Saturday,” Uli Hoeneß said at an event in Dresden earlier this week. The pressure is certainly on Bayern, and in the past, that is when they have performed at their best and Hoeneß might be right on this occasion this Bayern could very well hold Dortmund to a draw.

Dortmund vs Bayern – Players to look out for:

“This is the best Marco Reus, who we have ever seen,” former Dortmund and Bayern head coach wrote in his kicker column on Thursday. Unlike his Bayern teammates at the German national team, who seemed to have responded to the group stage elimination with lethargy, Reus has had a fantastic start to the season. Handed the captains armband Reus has scored nine goals and seven assists in 16 competitive games for Dortmund this season. But even more importantly Reus has been a leader on and off the pitch, if he plays well, Dortmund will be alright if Bayern shut him down then they are a halfway there. 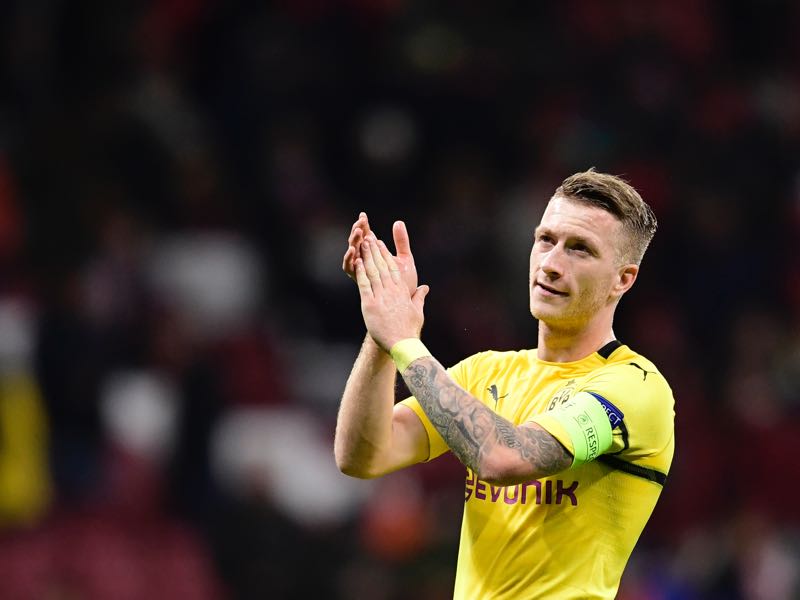 Ahead of the game against AEK Robert Lewandowski was left off the scoresheet for three games. The Polish striker is key for Bayern’s success. Lewandowski has been left hanging in the air by his teammates. Lewandowski’s inability to find the net has been a symptom of Bayern’s failure to break into the attacking third with speed and set the striker in scene. Getting Lewandowski consistently back on the scoresheet will be essential for Bayern success. But for Lewandowski to be effective against Dortmund, he will need the likes of Serge Gnabry, Arjen Robben and Frank Ribéry to send balls into the danger area. 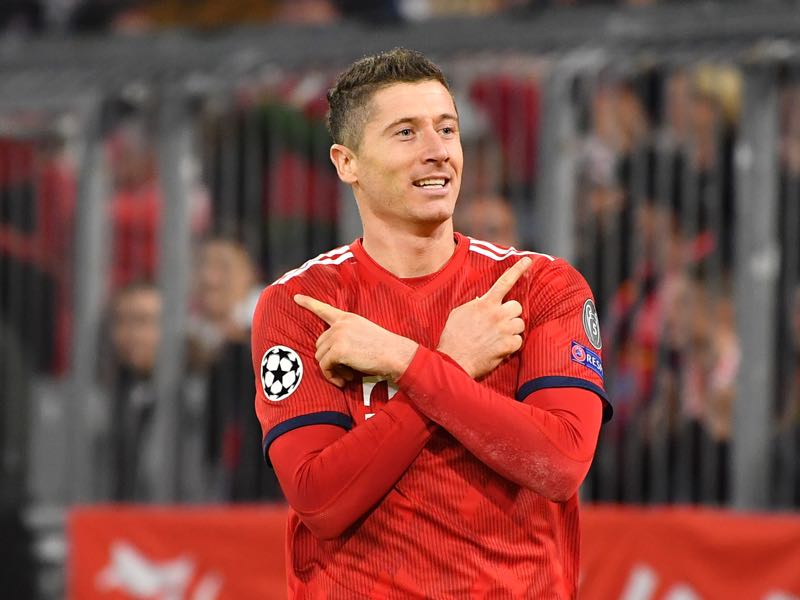 Dortmund vs Bayern – Robert Lewandowski will be key to Bayern’s success. (Photo by Sebastian Widmann/Bongarts/Getty Images)