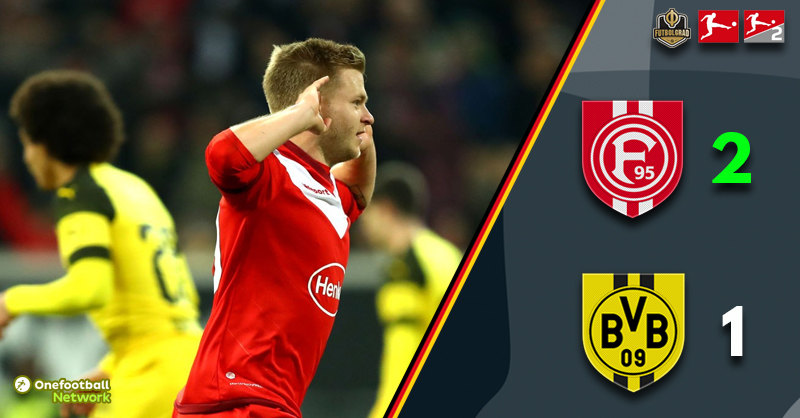 Dortmund v Düsseldorf produced the biggest upset of the season. Fortuna Düsseldorf already took two points of Bayern earlier this season and on Tuesday opened up the title race after defeating league leaders Dortmund 2-1 at home.

The setup in this one was clear from the get-go. Dortmund pressed high, and Fortuna were looking to hit the Black and Yellows on the counter with Dodi Lukebakio the outlet player. The striker, in fact, managed his first dangerous breakaway in the 3′ minute and Abdou Diallo and Manuel Akanji had to do well to contain the striker inside the penalty box.

It was a pattern that continued during the opening stage with Lukebakio, in particular, looking dangerous when going forward. Nonetheless, Dortmund scored first, at least that was what everyone thought when Marco Reus hammered a ball home in the 17′ minute, but Christian Pulisic had been in an offside position, and the goal was called back.

Instead, Lukebakio opened the scoring for Düsseldorf. Dortmund sat deep in Düsseldorf’s half, and Fortuna were waiting to spring lose their fast attacking forward, and that opportunity arrived in the 23′ minute with Lukebakio receiving the ball at the halfway line breaking forward and beating Roman Bürki with a low drive to the far corner.

That goal played into Düsseldorf’s hands. They could now sit deep and force Dortmund even further up the pitch. The Black and Yellows, in fact, struggled to dissect a tightly-knitted Fortuna defence playing to static and when they had chances lacked the efficiency to equalise with Mario Götze missing a clear-cut chance in the 33′ minute from the edge of the box.

Then in the 38′ minute, Fortuna should have doubled the lead. A cross from the right seemed destined to find completely wide open Takashi Usami, who only would have had to tap the ball across the line, but to the disbelieve of the Fortuna crowd the Japanese forward could not connect with the ball and the chance was gone.

Düsseldorf managed to carry the lead into the second half. Furthermore, in the 56′ minute die Fortuna doubled the lead. Jean Zimmer was left wide open on the right flank, and although he was about 25 yards out he opted to shoot, and the ball curled away from Dortmund keeper Roman Bürki for a stunning goal.

Dortmund head coach Lucien Favre now reacted – taking off Jacob Bruun Larsen and Thomas Delaney the head coach brought on Jadon Sancho and Paco Alcacer. But even with the extra firepower on the field, Dortmund struggled to find a way through a well organised Fortuna defence.

Instead, Lukebakio almost had his second in the 71′ minute when he curled a shot from outside the box. But Roman Bürki was there to collect the ball. Then in the 73′ minute, Kevin Stöger unleashed a shot from 25 yards that whizzed just past the far post of Bürki’s goal.

And on the other side? Rensing was almost a spectator for the first half of the second interval with Dortmund not managing a single shot on net until the 76′ minute when Abdou Diallo got on the end of a Sancho corner-kick, but his header lacked pace and Düsseldorf remained up by two goals.

In the 80′ minute, Dortmund finally pulled one back. Jadon Sancho beat two defenders and sent Lukasz Piszczek deep into Düsseldorf’s box where the Polish wing-back reached the ball on the byline to sent a lopped cross into the six-yard box where Paco Alcacer was waiting, and the Spaniard headed the ball across the line.

Düsseldorf were now hanging on with everything they got as Dortmund tried to press for an equaliser. But the minutes ticked by without Dortmund producing anything tangible and in the end Fortuna celebrated a massive three points in the relegation battle.

Dodi Lukebakio was the man of the match. The Belgian forward has now scored four goals against Bayern and Dortmund. Lukebakio’s speed and precision in front of goal makes him a perfect weapon for Fortuna Düsseldorf and a fascinating prospect for his club Watford from where Lukebakio is currently on loan from. 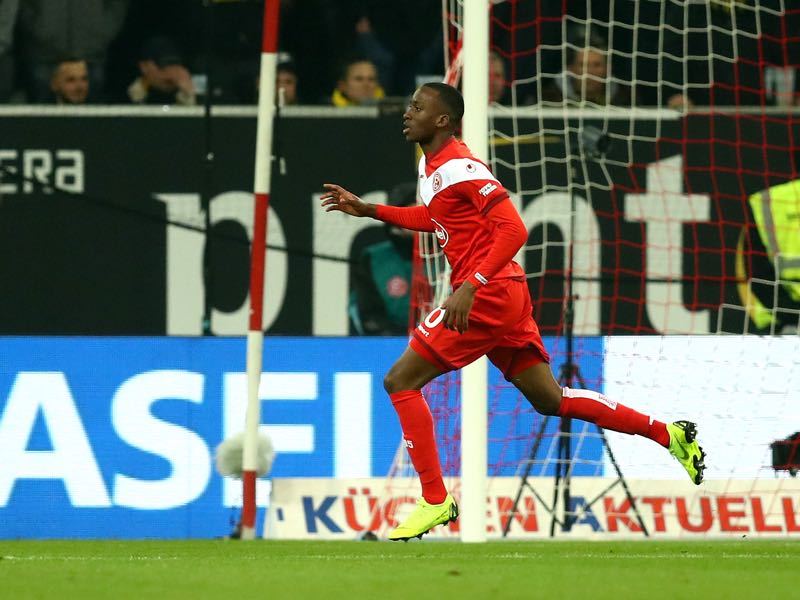 Too much rotation? Lucien Favre opted to start Christian Pulisic, Marcel Schmelzer, Mario Götze ahead of the likes of Jadon Sancho, Achraf Hakimi and Paco Alcacer. A strange decision given that Dortmund only had two games left ahead of a month-long winter break. Ultimately, Schmelzer and Pulisic, in particular, struggled to produce the sort of momentum that the likes of Hakimi and Sancho have displayed throughout the entire Hinrunde. As a result, Dortmund loses their first game of the season against a Fortuna side that had rightly identified the Black and Yellow’s problems when playing against deep sitting defensive lines.