Edin Terzic spoke on his disappointment after a 2-2 draw with Köln on Saturday afternoon – citing a lack of concentration coupled with a loss of shape as the main factors for his side’s dropped points.

Borussia Dortmund notched up another poor performance as the Black and Yellows missed their chance to make up ground in the Bundesliga’s race for the top-four.

Two goals from Erling Haaland were not enough to see Edin Terzic’s side take all three points on offer in Cologne, despite the visitors taking an early lead after just three minutes.

If the Norwegian’s first touch – to take a pass from Emre Can out of the air – could be described as sensational, then the finish which followed was simply phenomenal.

An audacious nutmeg saw the forward slide the ball through Timo Horn’s legs – the cherry on top of a move that underlined just why the Dortmund goalscorer is currently considered the best young striker in Europe.

The early strike should have been a catalyst for Dortmund to push on and stamp their authority on the fixture, but what followed was reminiscent of the problems that have plagued the Schwarzgelben all season.

Hosts Köln were gifted a way back into the match after Jude Bellingham leaned into a shot by Noah Katterbach. Even though the Englishman kept his hand behind his back, the use of his upper arm was enough for Daniel Siebert to point to the spot after an on-field review.

It was a number of unforced errors that peppered the opening half, in which Dortmund needlessly gave away possession and seemed to buckle under the pressure of Köln’s attacking press.

Ismail Jakobs then embarrassed Thomas Meunier just after the hour mark, the left-back come winger skipped past the Dortmund defender as if he wasn’t there before rifling a shot past Marwin Hitz.

It looked as if all three points would be staying in the RheinEnergieSTADION until Haaland rescued one for Terzic’s side on the stroke of full time with a close range tap-in.

The forward was evidently frustrated at the final whistle, throwing his shirt to Jorge Meré before storming off down the tunnel – however, Haaland had calmed down enough to tweet his post-match thoughts on the way back to the Westfalenstadion.

His assessment of the game was matched in part by interim coach Edin Terzic, “We had a great start to the game, with the early goal – we then had a clear cut chance after eight minutes to score a second,” the 38-year-old said pitch-side.

“Then we we start losing simple and easy balls, we had too many unforced errors, this lets Köln get back into the game, and we then lost control of the match, although we considered the penalty a bit unlucky.

“In the second half we turned it around a bit, we accelerate the game better, but we have to say that it’s a fair draw today – even though we had more clear cut chances.”

Terzic’s disappointment that the game couldn’t be won after the opening three minutes was also clear to see: 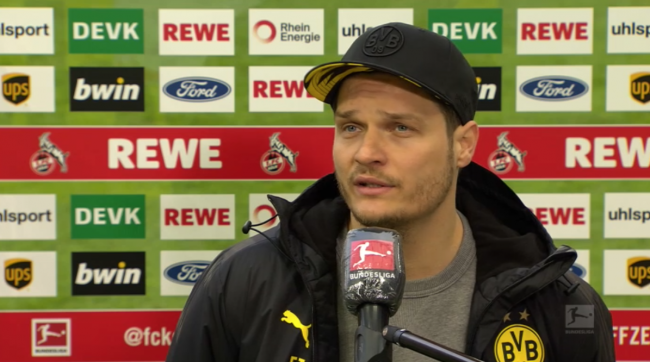 “We had enough chances here to leave the pitch with three points. But at the end of the day it was not a good performance and so we have to live with it. The situation is like this – we have to bounce back to in two weeks time, and then get the points somewhere else.

“After 15 minutes or so, for the next 10 to 15 minutes, the pitch was way too big. The game was too fast, it played more like basketball than football. We took some time to get back into our shape, to get control over the game again, and it was not a good period for us.

“Today we are disappointed, tomorrow we’re going to wake up, we’re going to make a good analysis about the game and then, when the boys come back after the national team break, we’re going to fight again for the for the 24 points that are left.”