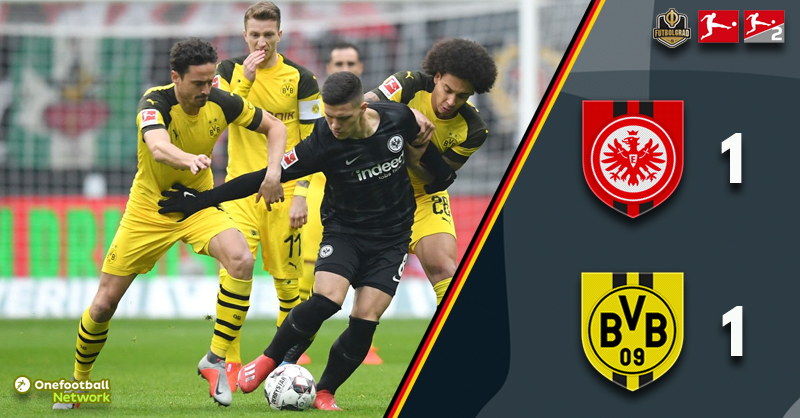 Eintracht Frankfurt vs Borussia Dortmund promised goals and it didn’t disappoint. A fast and frantic first half made way for a slow second, the draw a fair reflection of a hard afternoon’s work for both sets of players.

In a fixture that has produced only two goalless encounters in the past 93 meetings, there was always a feeling that this afternoon’s battle would be peppered with goals, it was a feeling that only grew stronger from the opening seconds.

With barely over a minute on the clock both sides had seen opportunities spurned. Firstly, Marco Reus intercepted a lose pass played across the Frankfurt box, but the Dortmund captain couldn’t bring the ball under control just 20 yards from goal.

Moments later, Roman Bürki produced yet another early save to prevent his side from going behind. Following up last week’s heroics against Hannover, the Swiss international used his heel to deny Danny da Costa a goal inside two minutes – the tempo for the game had been set.

For the opening 15 minutes this match-up ebbed and flowed, back and forth. Jadon Sancho was as dangerous as ever for Die Schwarzgelben. Whilst for the hosts, Filip Kostić was causing all sorts of problems with his high energy play.

However, it was Reus who opened the scoring – after a wonderful assist by Raphaël Guerreiro. The Portugal international ghosted through the Frankfurt defence and picked out his captain, all Reus had to do was tap the ball into an empty net.

It was the 29-year-old’s 13th goal of the Bundesliga season and he should have added two more inside three minutes – a poor finish and then a cracking of the crossbar kept the scoreline in Frankfurt’s grasp.

Die Adler had just about managed to ride a yellow and black wave of attack, the hosts then set about finding an equaliser – weathering a Dortmund storm they then created their own.

Luka Jovic, Sebastien Haller and Ante Rebic combined just after the half hour mark, but Rebic could only fire his shot wide – it was a warning Dortmund would fail to heed.

Both Adi Hütter and Lucien Favre must have imparted to their players at half time that too much space was being afforded to the opposition, as the second half heralded a much tighter encounter.

Instead of the back and forth seen during the first 45 minutes the game swerved into a probing midfield encounter. Who could stretch their opponent first and get in behind – what was fast becoming – two resolute back lines?

With the speed in which the first half was played it was no surprise that temp began to drop, as the fixture edged towards the final ten minutes it looked like only a mistake, or a spark of genius, would break the deadlock.

Paco Alcacer looked to have provided a piece of quality to snatch victory – the Spaniard’s free kick on 85 minutes just dipped over the top of the bar. Landing on the roof of the net it provided an optical illusion which convinced the travelling Dortmund fans it was a late winner – alas this was no Augsburg repeat.

It wasn’t to be and as the final whistle sounded the draw was a fair reflection of the preceding 90 minutes.

Eintracht Frankfurt vs Borussia Dortmund – Man of the Match

Not only did the 25-year-old provide the game’s only spark of real quality, the Dortmund midfielder created another three big chances.

Guerreiro was unfortunate not to find himself on the score sheet in the second half, denied at the last by Makoto Hasebe. It was another impressive performance by the midfielder who is enjoying life at Dortmund under Favre. 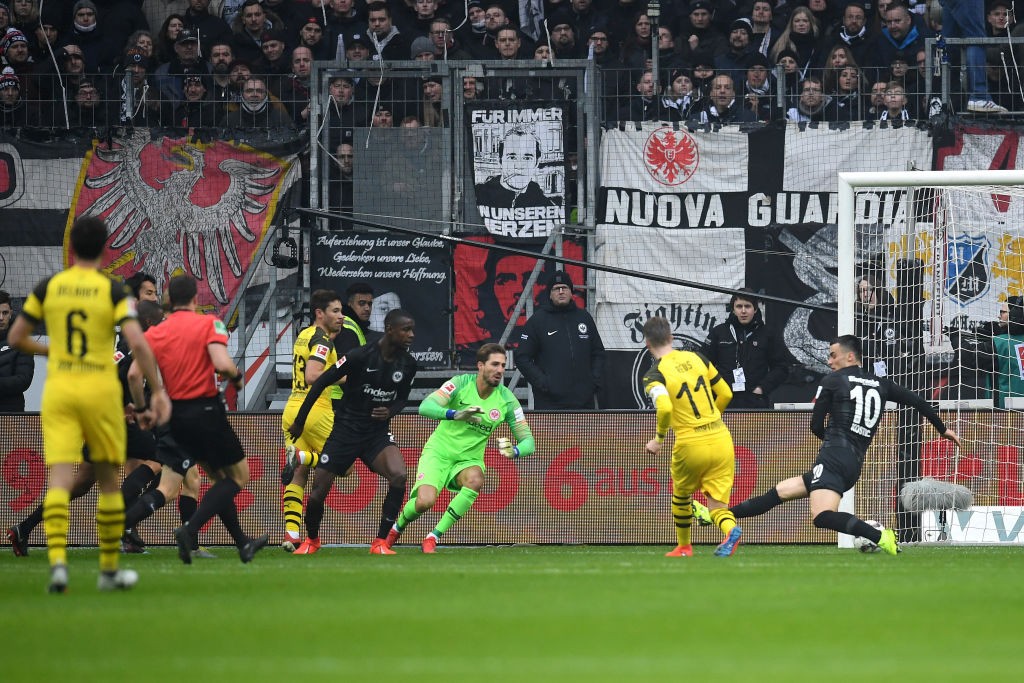 A very disciplined Frankfurt kept the league leaders quiet for large parts of this fixture, but Dortmund will be disappointed they were unable to take more than just the one goal from a frantic five minutes of first half football.

Bayern’s defeat at Bayer Leverkusen means a hard earned point in the Commerzbank-Arena allows Dortmund to stretch their lead at the top of the Bundesliga table to seven points.