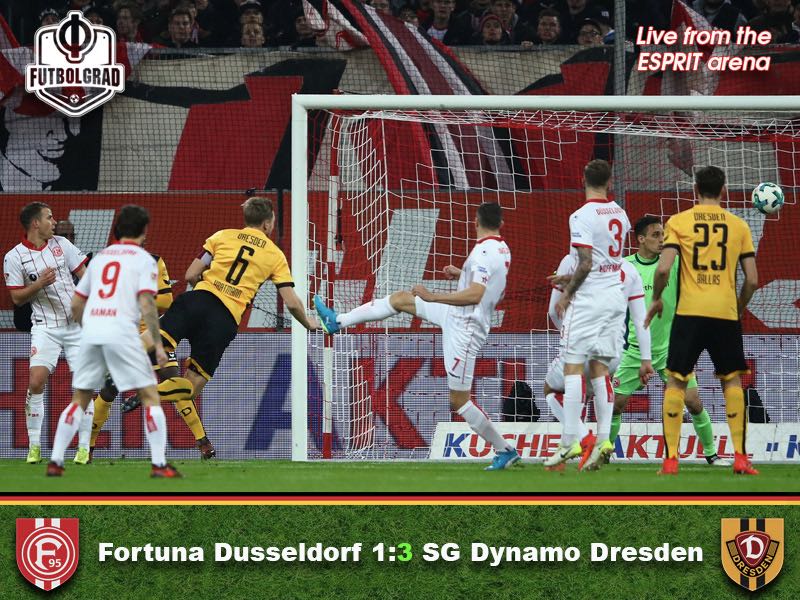 Dynamo Dresden went into the match under pressure and were the more active of the two teams from the get-go. As a result, it only took Dynamo four minutes to take the lead with Marco Hauptmann scoring a wonderful header after Philip Heise corner-kick. Just a few moments later Dynamo were up by two after Lucas Röser scored with a wonderful strike from 20-yards out. But Dynamo were not finished in the tenth minute Haris Duljević scored an almost perfect copy of Röser’s second goal making it 3-0 with a fantastic shot from 20-yards out.

Düsseldorf almost got one back moments later with Takashi Usami breaking through on the right corner of the box releasing a wonderful curled shot that hit the underside of the bar and stayed out of Dynamo keeper Marvin Schwäbe’s goal. With three goals in their back Dynamo set a little deeper pressing Düsseldorf, who now had to go for goal, to make another mistake and the tactic was successful in that the Fortuna was unable to consequentially challenge Dynamo until the 31st minute when Benito Raman stole the ball from Dynamo keeper Schwäbe to score an easy goal. It was Fortuna’s only real chance of the first half, which was dominated by a Dynamo side that looked much better than the position in the table suggested.

Fortuna had an energetic start to the second half hoping that an early goal would shake Dynamo Dresden. But it was Dynamo that had the biggest chance in the early goings of the second half with Niklas Hauptmann breaking through on the right wing and his attack was just about stopped by keeper Raphael Wolf. With 53 minutes on the clock, Fortuna Düsseldorf had 62% ball possession but was outshot by Dynamo, who had six to four shots on target.

With 62 minutes gone the game flat-lined somewhat. Dynamo sat deep and waited for counterattack possibilities. One of those almost led to Dynamo’s fourth goal when Röser just about missed the net after a hard-low cross from Heise. It was the last true chance of the game. From then on Düsseldorf played like a team that managed a narrow lead or a draw rather than a team that tried to come from behind. Dynamo was the deserved winner and collect three big points in the relegation battle.

Marco Hartmann was the player of the match. The Dynamo Dresden central midfielder not only scored this evening but also acted as Dresden’s anchor in midfield. The 29-year-old midfielder won 11 out of his 15 duels, had six clearances, four tackles and four interceptions.

Düsseldorf could have taken the first spot in the table with a win over Dynamo Dresden today. Winless in four games Düsseldorf now travel to first placed Holstein Kiel, who drew Ingolstadt 0-0 on Saturday. In the current form, Düsseldorf will find it difficult to beat Kiel in what will be the Bundesliga 2 top game of next weekend. 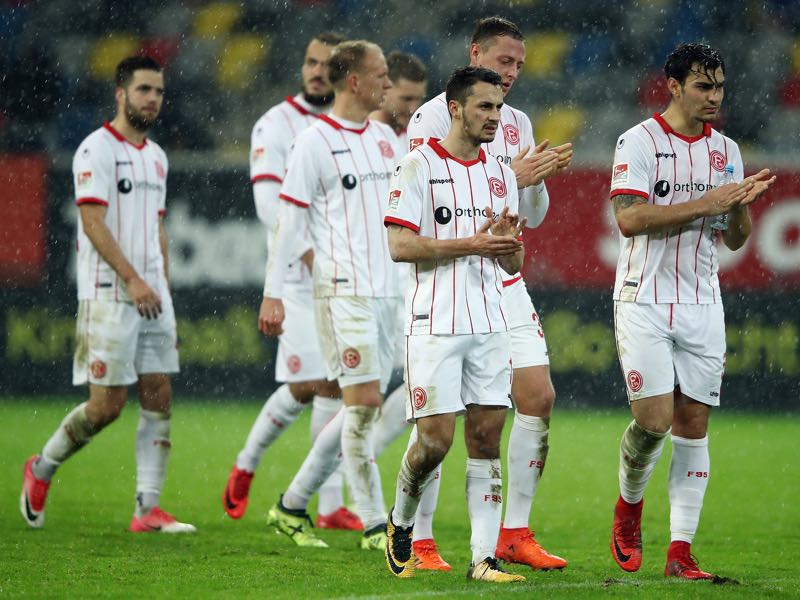 Friedhelm Funkel: “Uwe congratulations to a deserved victory. We started poor and made two big mistakes and were down by two goals. Two wonderful strikes meant we were down quickly by three goals. We got back into the game after we scored. We tried to get back into the game. But Dresden was sitting deep and on a deep and slippery ground, we were unable to get back into the game. We deserved the game 1-3, but it isn’t the end of the world. We are still second and we will keep working hard and in the last three games before Christmas, we will get the necessary results. The current situation is normal and we are looking forward to the top game.”

Uwe Neuhaus: “The way we came out of the dressing room is the way we want to play. We scored some fantastic goals and tried to put pressure on the opposition. The 1-3 showed that we have some issues and at half-time, I tried to highlight some of our issues. We then tried to limit Düsseldorf’s room, which was difficult against a team that plays good combination football. I feel that the result was deserved, but overall we haven’t achieved anything and need to keep working hard.”