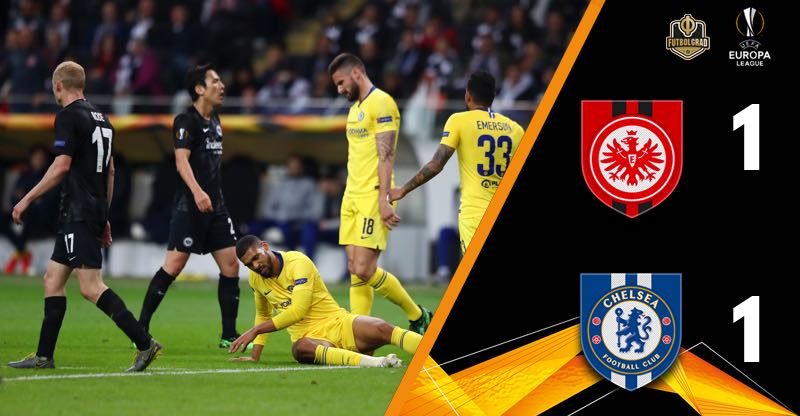 Frankfurt v Chelsea – Eintracht Frankfurt and Chelsea couldn’t be separated after a 1-1 draw in the UEFA Europa League semi-final first leg at the Commerzbank-Arena. Luka Jovic put the German club in front in the 23rd minute with Pedro equalising for the Blues on the stroke of half-time.

Chelsea largely dominated the match and will be confident of finishing off the job at Stamford Bridge where the Premier League club have won their last nine UEFA Europa League matches.

They do occasionally, but in this instance the 68% possession, 16-6 shot advantage, and 11-4 corner count was a fair reflection of Chelsea’s dominance. They took a while to get into the game and fell behind midway through the first half, but Maurizio Sarri’s side showed superior skill, growing into the contest and largely controlling the match.

Maurizio Sarri admitted that his side had some mental difficulties in their approach and lamented the loss of control in the final five minutes. He must be content however after navigating a tricky test in Frankfurt where Marseille, Lazio, Shakhtar Donetsk and Benfica have all tasted defeat this season.

Cesar Azpilicueta said Chelsea played for the win after half-time: “We were a bit in trouble at the start, but after 15 minutes we dominated. At half-time, we knew we hadn’t started very well or coped with the early pressure. We got the goal just before half-time, which was important, and then the ambition was to win the game in the second half.”

Ruben Loftus-Cheek was the major driving force for Chelsea, bursting forward on regular occasions and completing nine dribbles which was one fewer than Frankfurt managed collectively. The 23-year-old has an impressive physique, manages space and has the technical ability and vision fitting of a top quality player.

Loftus-Cheek had two early opportunities with a shot blocked by Simon Falette before cutting across the top of the box and firing an effort just wide. He was on the spot and alert enough to provide the assist for Pedro’s equaliser with the Spanish winger shooting through a crowded penalty box. 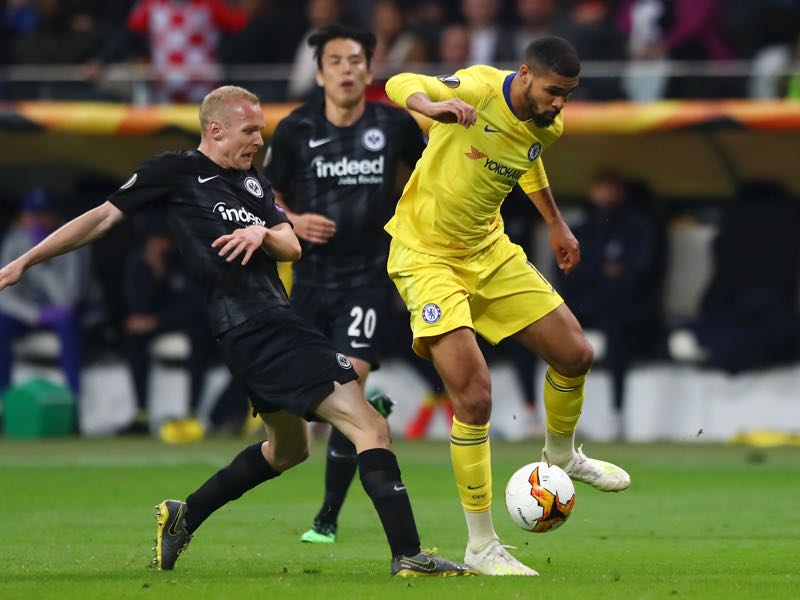 Sarri said Loftus-Cheek hasn’t been able to train with consistency this season and called to be replaced in the final 10 minutes. Nevertheless, the Italian tactician understands what a talent he has in his squad: “He is a very important player, and he has improved a lot during the season.”

It was always going to be a tall order for Frankfurt with two key attackers injured and not fit enough to feature on the bench. Sébastien Haller and Ante Rebic have been vital for Eintracht’s this season, and their absence left Luka Jovic short of support.

Jovic took his goal well, releasing Filip Kostic on the left wing before finding space and steering his pinpoint header past Kepa Arrizabalaga. Frankfurt could be buoyed by the return of Ante Rebić in London which will give the Bundesliga club an extra dimension in attack sorely missing tonight.

Martin Hinteregger has been an important player for Frankfurt following his winter switch from Augsburg and was given a tough assignment on Olivier Giroud. The ‘Tackling Machine’ showed no fear and frustrated the French striker on a number of occasions.

#SGECHE Another special evening in Frankfurt as Eintracht host Chelsea in the UEFA Europa League semi-final 1st leg. Ante Rebic is out alongside Sebastien Haller. @FutbolgradLive is everywhere this week. pic.twitter.com/nJkHvTn8sI

He played on the edge at times, but this was another strong performance from Hinteregger who has been battling injury. The Austrian defender will have another tough match in London and will need to be at his best if Frankfurt are to pull off a big upset.

All to play for in London

It’s going to take a near-perfect performance from Adi Hütter’s side and a fair share of luck, but there are positives Eintracht can take to London. One of the obvious ones is striker Luka Jović 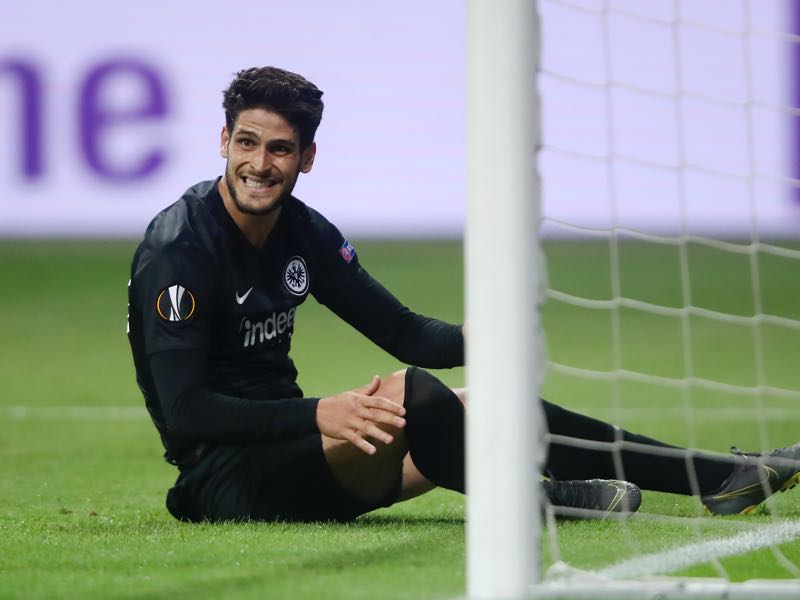 Jović scored his 26th goal of the season and continues to link up productively with Filip Kostic. Jovic’s goal was one of two Frankfurt shots on target, but they did spurn other opportunities.

David Abraham shot over the bar from close range on two occasions, Danny da Costa’s cross was inches away from substitute Gonçalo Paciência, and the Portuguese striker saw a shot blocked after a Chelsea mix up allowed Makoto Hasebe to burst into their box.

Eintracht will have to overturn Chelsea’s 16 match unbeaten run in the UEFA Europa League and nine-match winning streak at home in the competition to reach the final in Baku. Football constantly teaches us invaluable lessons; however, namely that anything is possible.