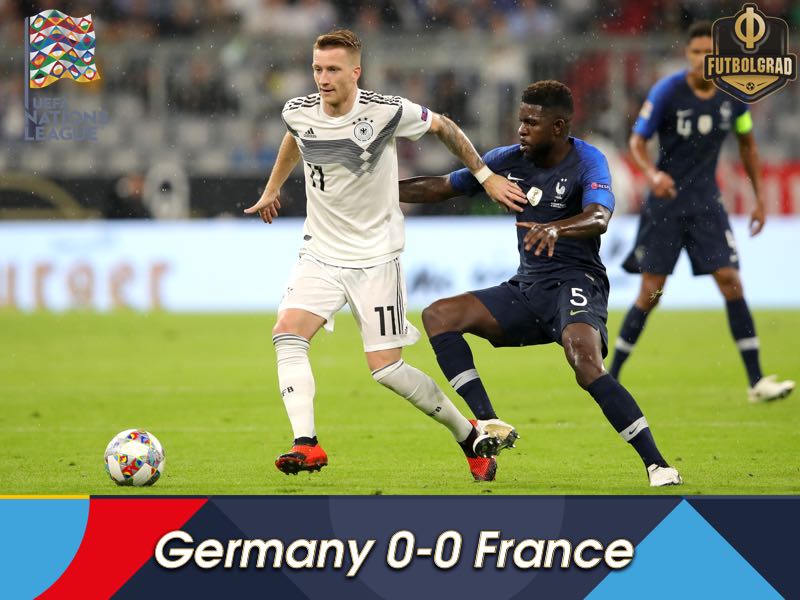 Despite a spell of dominance, Germany only manage a 0-0 draw against France

Germany v France saw the 2014 world champions host the current world champions. Die Nationalmannschaft, in particular, wanted to make up for a disappointing World Cup in Russia but despite spells of dominance in front of a sell-out crowd at the Allianz Arena failed to start into the UEFA Nations League will three points after a 0-0 draw.

With Joshua Kimmich in midfield and four full-backs with Antonio Rüdiger, Mats Hummels, Jérôme Boateng and Matthias Ginter Bundestrainer Joachim Löw made some significant changes to his starting eleven without shaking up the side too much. With the four-man defence and Kimmich in midfield, Germany quickly dominated possession and had France encircled in their half in the opening 15 minutes.

In the 17′ minute, Germany created their first chance. Timo Werner beat Lucas Hernandez on the left and then unleashed a low shot from left corner of the area, but keeper Alphonso Areola was up to the task to stop the shot.

France, in the meantime, were the less active side until the 36′ minute, when Manuel Neuer had to be on guard after Oliver Giroud got on the end of an N’golo Kanté cross. But the German captain quickly dived to the right to save the header and also showed his save hands in the 43′ minute following a Paul Pogba freekick from 20-yards out.

Germany may have dominated the start of the match, but France pressed die Nationalmannschaft hard in the last five minutes of the first half without managing to create the lead.

France then also had the first chance in the second interval. In the 48′ minute, Antoine Griezmann was given to much space on the right after Toni Kroos failed to clear the ball. The Atlético Madrid forward, however, failed to place his shot and Neuer was able to stop the ball with some minor problems.

Griezmann also had the next chance for France. This time he tested Neuer in the 65′ minute, from 25-yards out but the Bayern keeper was there to make the stop. Right off the stop, Germany headed the other way trying to hit France on the counter, and Marco Reus saw his shot from 18-yards turned away by goalkeeper Areola.

Germany also created the next chance. After winning the ball in his half in the 71′ minute, Mats Hummels played the ball to Marco Reus and then joined the rush the ball would eventually find the defender inside the area, but his shot was saved by Areola. Müller then tested Areola in the 75′ minute and the keeper then also had to be on guard on the following corner kick with Matthias Ginter testing him from close range.

In the period between the 70′ and 80′ minute Germany recorded 8-0 shots against France. But the ball did not want to cross the line. Die Nationalmannschaft were the dominant team at that period but like it was the case at the World Cup lacked the final punch to win this game.

Alphonso Areola was the man of the match. The Paris Saint-Germain goalkeeper was handed the start after Hugo Loris, and Steve Mandanda missed the match with injuries. Nominally the number two behind Gianluigi Buffon at his club Areola was up to the task, making several key saves to keep France in the game and help the Equipe Tricolore secure one point in Munich. 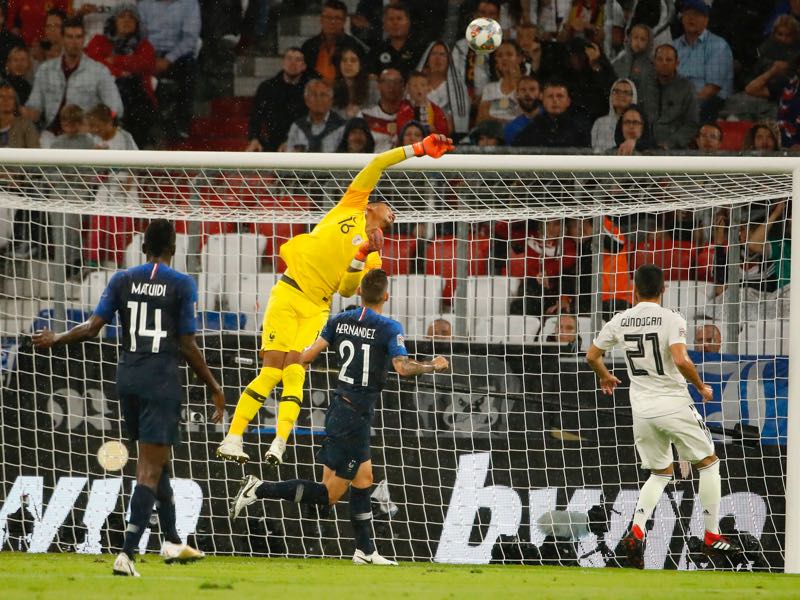 A renewed and re-invigorated Germany side was supposed to make up for the disaster in Russia. One of the key tasks ahead of this game was for Germany to stand their ground and be defensively solid. Die Nationalmannschaft did exactly that and then dominated the last 15 minutes. In that period, Germany should have won the game but without a true goalscorer simply were not able to get the ball across the line.