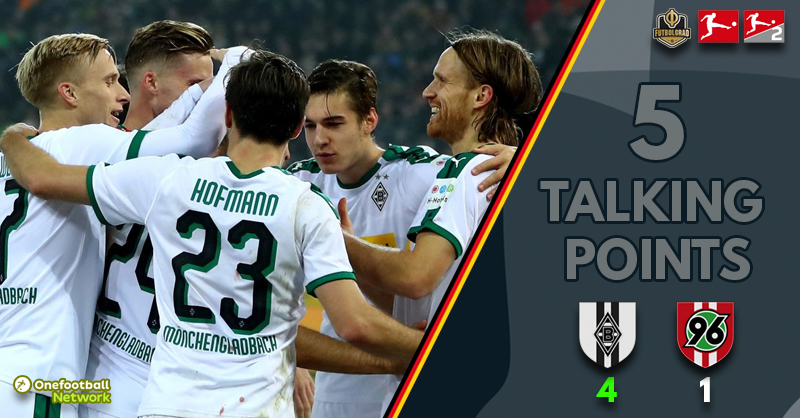 Borussia Park – Gladbach v Hannover ended 4-1, which means the Borussia Mönchengladbach reclaim the second spot in the Bundesliga. Bobby Wood put the visitors ahead after just 22 seconds, but goals to Thorgan Hazard, Michael Lang, Lars Stindl and Denis Zakaria rounded off another convincing display from the Foals.

The result was soured by a bad injury to Matthias Ginter with the central defender stretchered off just before half-time.

If there was any thought that Bobby Wood’s opener was going to be the catalyst for a major upset, Thorgan Hazard’s equaliser just six minutes later alleviated the fears and calmed the nerves of the home supporters. It was one-way traffic for the remainder of the match.

Mönchengladbach were far too strong and had no difficulty in the end. Hannover couldn’t handle the movement of Lars Stindl, the skill of Hazard or the poise of Tobias Strobl and were outclassed in every area of the pitch and every aspect of the game.

Hazard going from strength to strength

So long in the shadow of older brother Eden, Thorgan Hazard deserves a huge amount of credit for continually improving to become one of the most feared wingers in the Bundesliga. His early equaliser was a moment of pure class, curling a first-time left-footed effort into the top corner that gave Michael Esser no chance.

The Belgian had a shot blocked after a well-worked corner routine, his range of incisive passing on display on numerous occasions. Switching from the right to the left flank in the second half, Hazard was allowed time and space before putting the ball on a plate for Lars Stindl who volleyed past Esser to make it 3-1.

Gladbach v Hannover – Thorgan Hazard of Gladbach celebrates after he scores the equalizing goal during the Bundesliga match between Borussia Moenchengladbach and Hannover 96 at Borussia-Park on November 25, 2018 in Moenchengladbach, Germany. (Photo by Maja Hitij/Bongarts/Getty Images)

A clever through ball to Florian Neuhaus was close to creating a chance as Hazard picked up a deserved man of the match performance. If the 25-year-old keeps his form up there is little doubt he will be sitting at the head of the table in the Hazard household come Christmas Day.

Often guilty of making the wrong decisions and struggling with consistent end product early in his career, Hazard is absolutely flourishing in Mönchengladbach and at the top of his game.

After missing most of last season through injury, Tobias Strobl has overtaken Christoph Kramer as the first choice in the holding midfielder role. If there was any doubt as to why this performance summed it up as Strobl ran the show and used his vision and passing range to full effect.

I made a comment earlier in the season that Strobl wasn’t doing much except providing a screen for the back four that allowed the wide central midfielders to push forward. I’m happy to admit I misjudged his passing ability which was delightfully captured against Hannover with the assist for Denis Zakaria’s goal.

Spotting a narrow gap in the defence and Zakaria’s forward run, Strobl provided a pinpoint pass that left Zakaria 1 on 1 against Esser. Perhaps an underrated part of Mönchengladbach’s success this season with the focus on Hazard, Stindl, Plea and Hofmann, the 28-year-old is proving to be an integral part of Dieter Hecking’s new 4-3-3 system.

It was ambitious for André Breitenreiter to start with two strikers but it looked like a masterstroke within the first minute, Niclas Füllkrug releasing Bobby Wood with the United States striker putting Hannover into an early lead. However, it soon became apparent that it was going to be a long 90 minutes for the visitors.

Without their two best players in central midfielder Walace and winger Ilhas Bebou, it was always going to be a difficult assignment. Hannover were outclassed all across the pitch with virtually no penetrative passes from defence or midfield. The way they fell asleep to allow Michael Lang to score was comical and embarrassing.

Breitenreiter made two tactical substitutions with Kevin Wimmer replacing Iver Fossum as Waldemar Anton moved into defensive midfield. It had no positive effect. Hendrik Weydandt came on for Linton Maina but the front three of Füllkrug, Wood and Weydandt were toothless and unable to fashion a chance.

I don’t want to take anything away from Borussia Mönchengladbach’s achievements this season, they deservedly sit second in the table and are only four points behind the unbeaten Borussia Dortmund. Their home form is superb despite a 5-0 thrashing at the hands of Bayer Leverkusen in the DFB-Pokal.

However, we need to take into consideration the fact that Christian Streich devised a way to shut the Foals down, and Mönchengladbach’s previous three Bundesliga home matches were against Mainz (4-0), Fortuna Düsseldorf (3-0) and Hannover (4-1). 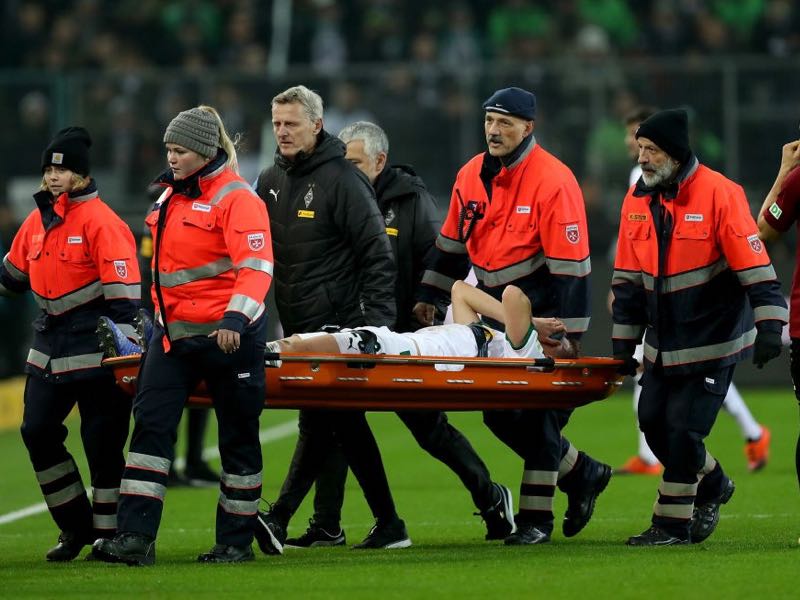 Gladbach v Hannover – Matthias Ginter of Gladbach is carried injured off the field during the Bundesliga match between Borussia Moenchengladbach and Hannover 96 at Borussia-Park on November 25, 2018 in Moenchengladbach, Germany. (Photo by Maja Hitij/Bongarts/Getty Images)

Matthias Ginter was involved in a nasty collision with Noah Sarenren Bazee before half-time with the central defender stretchered off and taken to the hospital. It was an unfortunate incident and thoughts go out to Ginter who hopefully makes a speedy recovery.

The German international was ever-present last season, starting all 34 Bundesliga matches for Mönchengladbach and playing every minute of the campaign. Ginter is irreplaceable, his absence will be sorely missed and their top four spot could be in jeopardy with a tough away schedule featuring matches at Leipzig, Hoffenheim, Borussia Dortmund, Bayer Leverkusen, Schalke and Eintracht Frankfurt.