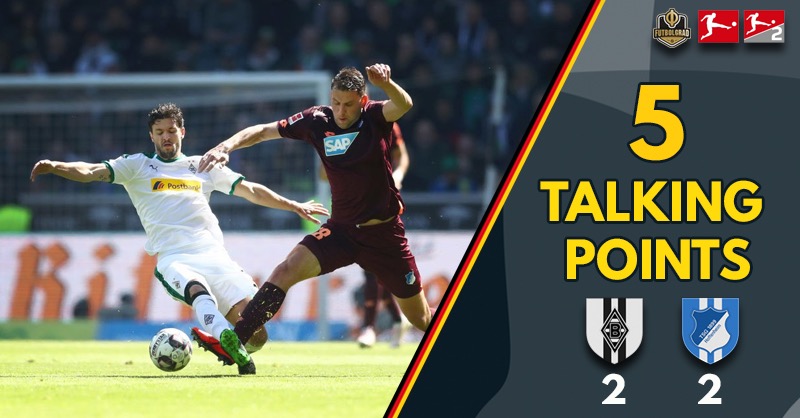 Gladbach v Hoffenheim – Borussia Mönchengladbach fought back twice to secure an important 2-2 draw against Hoffenheim at Borussia-Park. Pavel Kaderábek gave the visitors a deserved 1-0 half time lead before Matthias Ginter equalised in the 72nd minute. Nadiem Amiri scored a screamer to restore Hoffenheim’s advantage before Josip Drmic scored a late equaliser to secure a valuable point.

Dieter Hecking’s side were completely outplayed in the first half, managing just one shot at goal through Patrick Herrmann’s free-kick that was tipped wide by Oliver Baumann. Hoffenheim won the shot count 16-1, capitalising on a number of turnovers and shocking passing from the foals.

Hoffenheim looked increasingly dangerous on the counter-attack and had multiple chances to extend their lead before Ginter’s equaliser. They should have been out of sight, and their failure to take presentable chances allowed Mönchengladbach back in the game.

Andrej Kramaric had two chances to score early on, Adam Szalai next with a deflected shot and a header that Sommer tipped over the bar. They wouldn’t be denied, however, an unmarked Pavel Kaderábek heading home Kerem Demirbay’s corner to give the visitors a deserved lead.

Stefan Posch headed a corner off the woodwork, and Ermin Bicakcic headed narrowly wide as a second seemed imminent. Demirbay then shot wide, Kramaric had an effort saved, and Nico Schulz saw his shot blocked as Hoffenheim had 16 attempts to one in the opening 45 minutes. 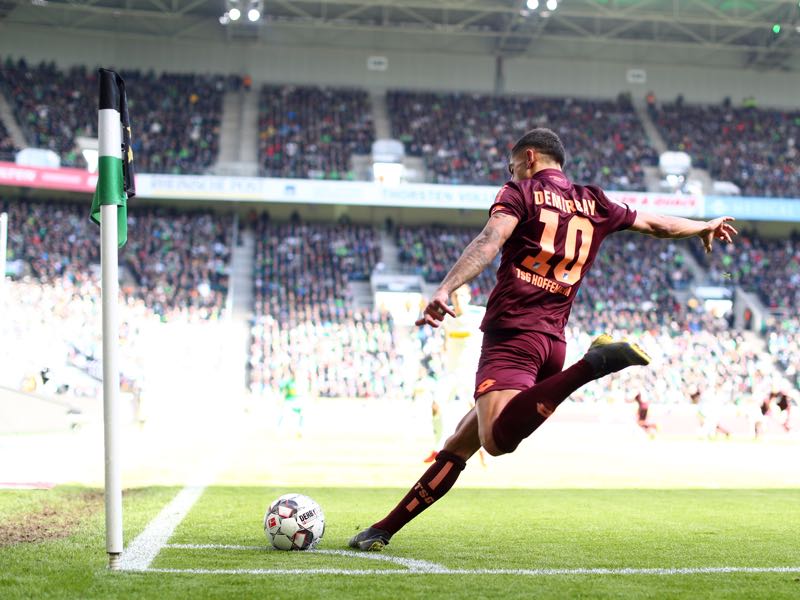 The chances kept coming after half time, Szalai spurning two great chances to score before Ishak Belfodil dragged a presentable chance wide. The Algerian had another good chance to make it 2-0, heading Nico Schulz’s cross over the bar before Kramaric somehow shot wide after being left unmarked at the back post from a corner.

The game should have been over by the time Ginter equalised, another disappointing result in a season plagued with missed opportunities.

The hosts were not only outplayed from a formation and tactical perspective. Man for man Hoffenheim have superior players in a number of positions who have been playing with freedom and confidence.

It was a worrying performance from Mönchengladbach who were excellent in the hinrunde. They deserve credit for showing fight and belief to get back into the game and avoiding a defeat that could have been catastrophic.

Dieter Hecking must have been preparing himself for the worst with his team second best for much of the match. Mönchengladbach’s form since the 3-0 home defeat against Hertha Berlin on Matchday 21 has been dire, and defeat could have seen his side in the eighth position and out of Europe with two games remaining.

He made two changes after half-time with Louis Beyer and Ibrahima Traore coming on for Tony Jantschke and Patrick Herrmann. He switched to a 4-3-3 formation, and it went some way to get his team back in the game. Traore was integral in the fight back, and Hecking’s final substitution was Josip Drmic who was on the spot to make it 2-2.

Huge result in the race for Europe

Hoffenheim would have overtaken Mönchengladbach had they taken all three points, but remain in the seventh spot with Werder Bremen and Mainz to come. They will be sweating on Bayer Leverkusen’s match against Eintracht Frankfurt on Sunday which could see them drop to the eighth position.

Exciting match as Hoffenheim fail to turn their dominance into a win against Borussia Mönchengladbach. Talking points up shortly @FutbolgradLive pic.twitter.com/hRrqsbh85I

Borussia Mönchengladbach looked like the top four was a realistic target early on this season, but two wins in 11 Bundesliga matches saw the foals fall down the table, and the challengers close in. Hecking’s side still have two tough matches to come against Nürnberg, and Borussia Dortmund, Europa League football is far from guaranteed next season which would be a massive disappointment for the club.