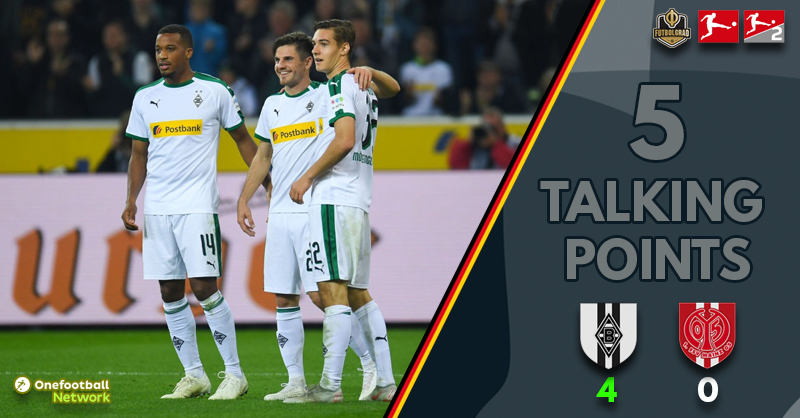 Gladbach flying, and Mainz are crashing – Five talking points from the Borussia Park

Gladbach vs Mainz closed Matchday eight as the hosts romped to victory courtesy of a Jonas Hofmann hat-trick and a well taken goal by Thorgan Hazard. The win takes Dieter Hecking’s side back up to second – three points behind leaders Dortmund.

Jonas Hofmann was the hat-trick hero after a fine individual performance. In and out of the team last season with Denis Zakaria and Mickaël Cuisance playing more minutes, the midfielder scored a penalty in the 2-0 win against Bayer Leverkusen on Matchday 1 and hasn’t looked back

Hofmann was on the end of a lovely team move to put his side in the lead, was in the right place at the right time to tap in Hazard’s cross at the back post and secured his hat-trick in style. Beating the offside trap, he drew Florian Müller off his line and rounded the keeper before stroking the ball into an empty net.

Experience the atmosphere at the Borussia-Park! Book your European football travel now by visiting Nickes!

It could have been more, Müller punching his long-range lob clear and seeing a good chance from the edge of the area blocked. Hofmann was integral to executing Gladbach’s high press, his energy and driving runs keeping Mainz on the back foot throughout.

Hofmann missed the 2-2 draw at Wolfsburg on Matchday 6 but has otherwise played every minute, providing three assists including two in the 3-0 win at Bayern Munich. Consistency has been his issue but the 26-year-old is playing with tremendous confidence and flourishing in Hecking’s midfield three.

Gladbach vs Mainz – Jonas Hofmann one for Löw?

With the Germany national team undergoing a rebuild Hofmann could be one to watch. “It would be an honour to be included in the national team,” Jonas Hofmann told the media after the game. “But ultimately, it isn’t my decision,” the attacking midfielder added.

The German media has brought Hofmann’s name up last week as part of a group of players that could bring a new element to Die Nationalmannschaft. “I like Jonas Hofmann he was lacking consistency the last few years but he is a player with technical abilities and good decision-making skills,” Joachim Löw told the media just a few weeks ago. Performances like the one against Mainz certainly not damage Hofmann’s chances.

Finishing a disappointing ninth last season, Dieter Hecking was criticised for not getting enough from a talented squad. This season couldn’t have started much better, just one defeat with a 4-2 loss at Hertha Berlin which cost Tony Jantschke his starting position in central defence. 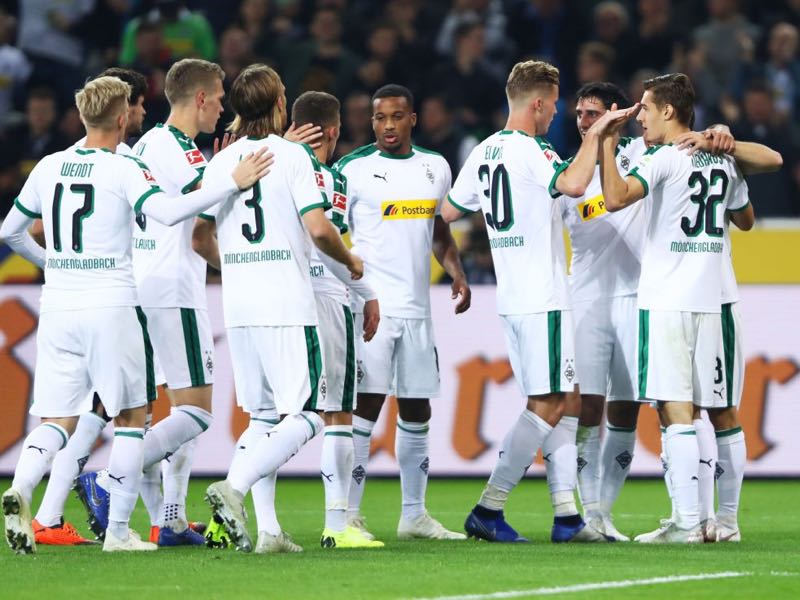 Gladbach vs Mainz – Jonas Hofmann of Borussia Monchengladbach (obscured) celebrates after scoring his team’s second goal with team mates during the Bundesliga match between Borussia Moenchengladbach and 1. FSV Mainz 05 at Borussia-Park on October 21, 2018 in Moenchengladbach, Germany. (Photo by Alex Grimm/Bongarts/Getty Images)

The switch to a 4-3-3 is working extremely well, with the two wide central midfielders a large reason for Gladbach’s success. Alassane Pléa has scored a goal or provided an assist in his last seven matches following his hat-trick in the DFB-Pokal 1stround. He was unlucky not to score but put the ball on a tee for Hazard’s goal.

Hazard was instrumental against Mainz and Lars Stindl’s return adds another dimension to their play. Confidence is sky high at the moment after two dominant performances, they can join Borussia Dortmund at the Bundesliga summit with a win at Freiburg on Friday evening.

Lars Stindl returned from injury in the Bayern Munich victory and was influential once again. He is afforded plenty of freedom under Hecking, roaming across the pitch which makes him a nightmare for the opposition to pick up.

Constantly dropping between the lines, Stindl instigated a number of dangerous attacking sequences that led to goals. His ability to play various positions means that space often opens up for his teammates, particularly Alassane Pléa and Thorgan Hazard but also the wide central midfielders as evidenced by Jonas Hofmann’s performance.

Mainz came into the match with the best defence in the Bundesliga after conceding four goals in seven matches. That tally was doubled this evening with the midfield unable to get a foothold in the match and next to no ability stop Mönchengladbach penetrating out wide.

The visitors gave away too much cheap possession. Despite some brief moments where they were able to exert some pressure, Mainz couldn’t create enough clear-cut opportunities. Jean-Philippe Mateta had the best chances but couldn’t score which has been the story of Mainz’s season so far. 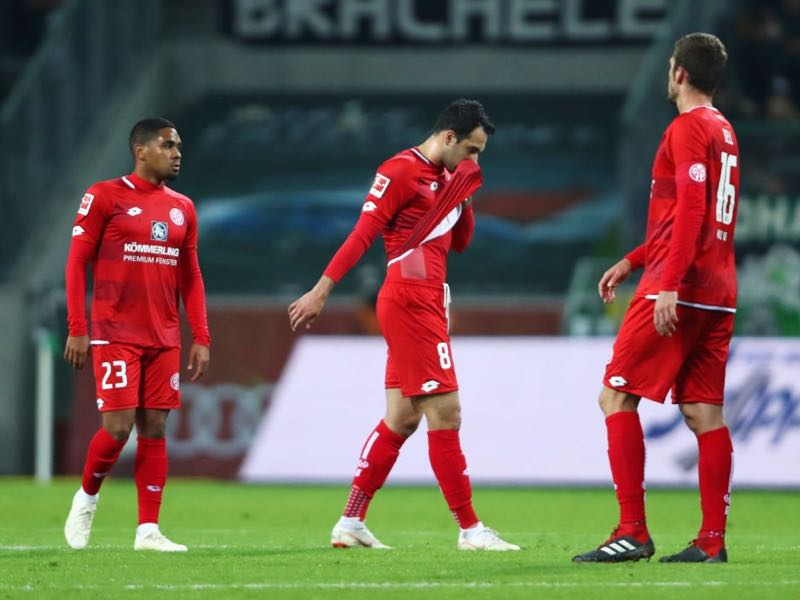 Manager Sandro Schwarz has run out of patience trying to get productivity from his wingers, playing a narrow formation with Jean-Paul Boëtius behind Mateta and Jonathan Burkhardt. Danny Latza’s return from injury is welcome with Ridle Baku carried off the pitch, but there is much work to do.

Four goals scored in eight matches tells the whole story. They simply must find a way to create better chances and putting them away or a relegation battle awaits. It might already be here, a home game against Bayern Munich on Saturday will be a tough assignment with Schwarz and his men set to be severely tested.