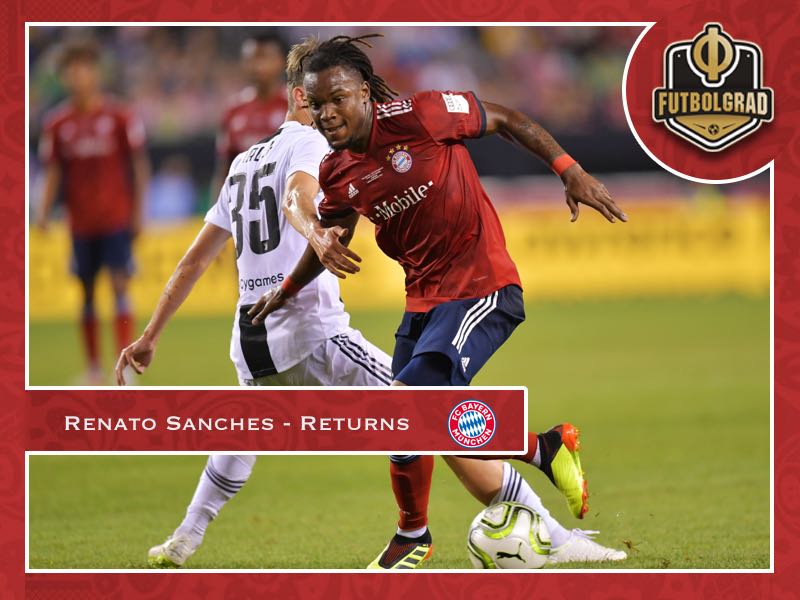 For the youngest ever European Championship winner and 2016 Golden Boy, an important challenge lies ahead for Renato Sanches at Bayern München this season. Two disappointing years following his arrival from Benfica have left plenty of doubts, for a player once hailed as one of the brightest talents in world football.

In truth, it was always going to be difficult for a player who was still only 18 years old when he arrived at the Bavarian giants, not least fitting into the plans of Carlo Ancelotti at the time and of course, competing to play in a midfield boasting top-quality seasoned campaigners.

Still very raw and with plenty to learn in order to polish his overall game, Sanches struggled – particularly with his positional play, often making basic mistakes that affected his overall game and performances, during the limited opportunities he was given by Ancelotti.

Although the Italian coach suggested he might persevere with the youngster, it seemed inevitable he would be shipped out on loan elsewhere for the 2017/18 season, which led to what many believed would be a chance to shine in the English Premier League.

Swansea City fans can only ponder on what might have been, had Sanches lived up to the initial hype and expectations surrounding his loan at the Welsh club last season. In principle, it looked a spectacular signing by then manager Paul Clement, who had evidently tapped into his relationship with Ancelotti to secure the move, having worked together at Real Madrid.

Sadly, all the Swans fans got to see from Sanches were uncomfortable displays during a frustrating total of just 703 minutes in 12 Premier League matches, with Clement eventually losing his job in December 2017 as the team failed to reach anywhere near the expected levels of performance.

Following the arrival of fellow countryman Carlos Carvalhal, there were brief glimpses of hope when Sanches played a full ninety minutes for only the second time, producing one of his best individual performances for Swansea as their new manager got off to a winning start against Watford.

However, the youngster suffered hamstring injuries in successive FA Cup matches in January 2018 and was granted permission to recuperate back home in Portugal, then under the watchful eye of Bayern München medical staff. Despite returning to the Liberty Stadium in April, he didn’t feature again for what little remained of the season.

Swansea City continued their spiral towards the abyss of relegation from the Premier League, without Sanches to help them avoid the drop. This season and looking to rebuild, the Swans are amongst the Championship betting promotion favourites, aiming to bounce straight back up after making a winning start to the campaign against Sheffield United on the opening day of the 2018-19 campaign.

Renato Sanches must move on from his Swansea experience

Clearly, the experience at Swansea is one that Sanches will be very keen to forget, with serious questions having been raised about whether the talented young midfielder would ever realise his true potential. Nevertheless, it appears that new Bayern München coach Niko Kovač is prepared to give the 20-year-old the time and patience to prove his worth this season.

Restoring self-belief will be a major factor for Sanches, although Kovač is regarded as an expert in that regard having rejuvenated the stalling careers of several key players at previous club, Eintracht Frankfurt. Indeed, Bayern chairman Karl-Heinz Rummenigge expressed certainty that “Niko will try and bring him back to his old strength,” in comments to Bundesliga.com in July.

There’s no doubt that competition for playing time will be fierce, in a Bayern München midfield packed with depth and quality amongst the options available to Kovač this season. However, the chance of more games could have significantly improved for Sanches, following the departure of Arturo Vidal to Barcelona.

Now it’s up to the talented Portuguese youngster to grasp every opportunity and fully realise his potential. Sanches has looked impressive during preseason, but now he must maintain that form consistently in the Bundesliga this season.