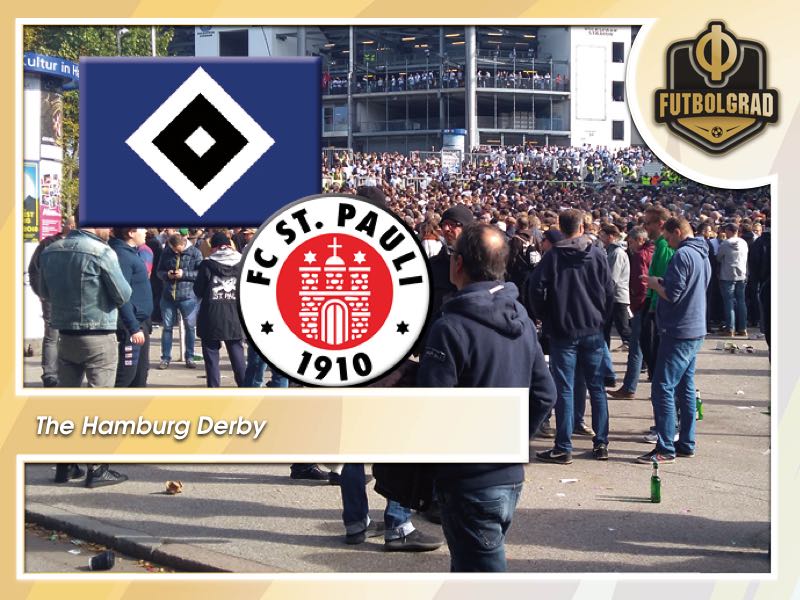 May 12, 2018 will go down in history as the date the clock was stopped. Hamburger SV were relegated for the first time in Bundesliga history. In truth, it had been coming. HSV, one of German football’s biggest clubs, flirted heavily with demotion to the second tier on three occasions before finally falling through the trap door. However, it did not take their large following long to discover several silver linings.

First of all, playing in Bundesliga 2 would probably mean they would finally win more games than they would lose. Secondly, they could regain the position of ‘Stadtmeister’, champions of Hamburg. This unofficial honour has been held by St Pauli since 2011, when they won 1-0 at the Volksparkstadion. When the German FA announced the fixtures for the upcoming season, the Hamburg derby was the one most looked for. I just had to be there.

Getting a ticket for HSV in the second tier is usually easy. General sale lasts long enough to secure a place in the 57,000 capacity ground. This game, however, was different.

All derby tickets were gone in an instant, demand was so big that I saw a foreign supporter hand over €250 for one. St Pauli staged a public viewing event in their Millerntor-Stadion. Even that sold out. Thankfully, working for a Dutch football magazine allowed me to get in with a press ticket.

The Volksparkstadion during the Hamburg Derby

The S-Bahn (city train) to Stellingen was completely full with supporter 11am, over two hours before kick-off. Stellingen serves as the place where supporters have a beer and a sing-song before heading into the ground, where entertainment is in shorter supply. 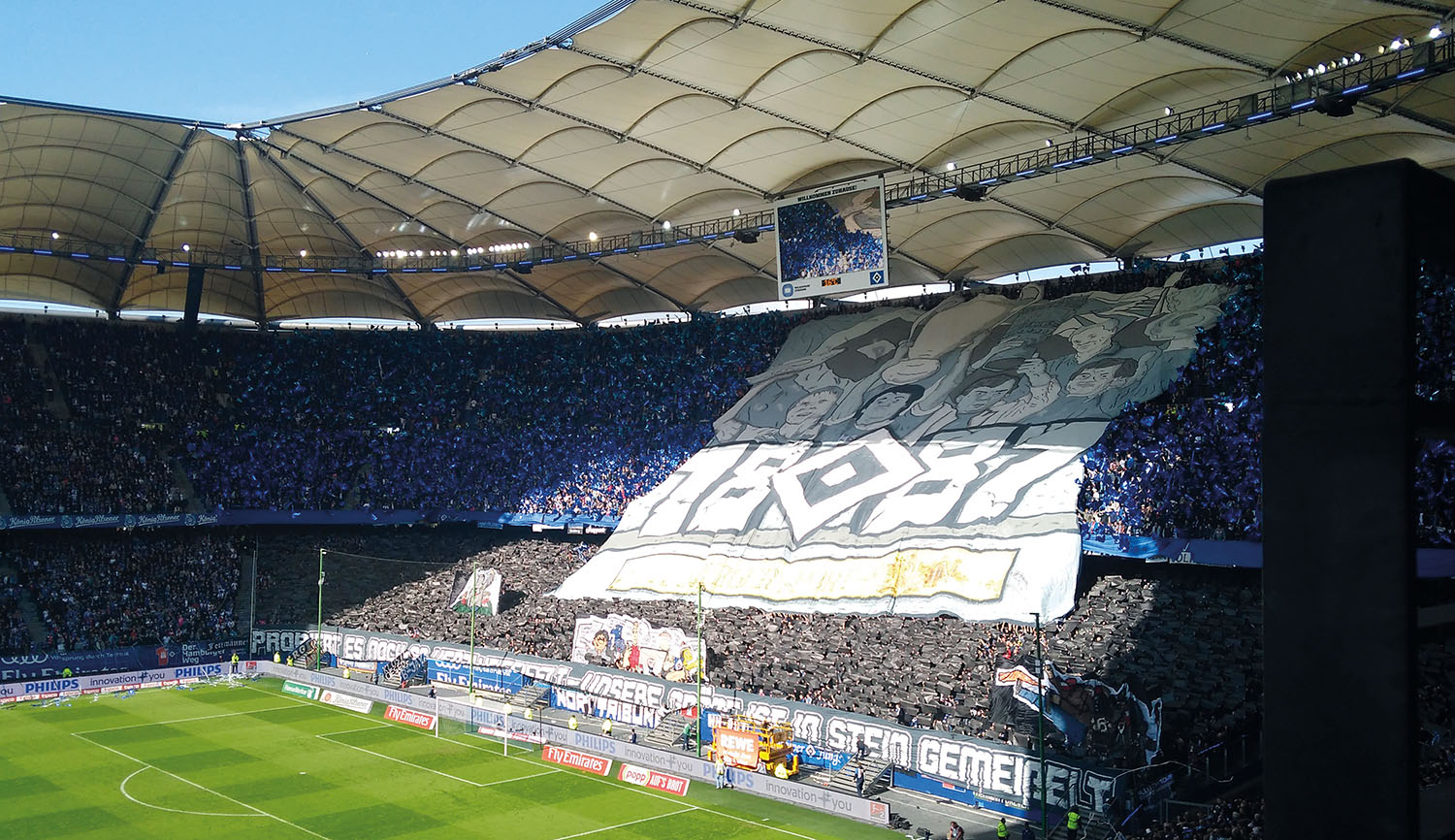 The Volksparkstadion in Hamburg is ready for the Hamburg derby

The club runs shuttle buses from Stellingen to the ground for whoever does not fancy the 20-minute walk. As I arrived in plenty of time, I took a walk around the impressive arena. An abundance of police officers guarded the entrance to the south west stand, as that was where the 5,500 St. Pauli fans would be located.

They must have done something right, as tiny factions from both sets of fans had insisted on clashes. I entered the ground over half an hour before the game commenced and saw many people already in their place. Because there are no reserved places on the terraces, supporters have to get in early to secure a decent spot.

Choice of music tells a lot about identity. St Pauli are a club of the Kiez (slang for borough), attracting fans worldwide for their left-wing ideology. The players enter the field through a dark alley and to the tune of AC/DC’s Hell’s Bells. HSV take a more local approach, with several serenades to the city being bellowed out by the Nordkurve, home to the hardcore support, before kick-off.

There is plenty of time in between for a few exchanges between both sets of fans, often including colourful language. As kick-off approaches, the ultras reveal what they had been working on. Beautifully constructed banners fill the ground, though attention largely focuses on a silly spelling error on one of HSV’s creations.

The game itself is a disappointment. The pressure gets to the players, demonstrated best by HSV keeper Julian Pollersbeck. Rays of sunshine linger over the ground and he seems undecided as to whether or not protect himself with a cap. He should not have worried: St Pauli hardly threaten.

The same can be said about the home side. Not all goalless games are dull, this one is. Incredible as the atmosphere may be, 0-0 is the only correct outcome. The St Pauli supporters are clearly the happier bunch. A draw away to a title favourite is a good result and they also retain their position as Stadtmeister, gleefully reminding their city neighbours of that fact whilst they exit the ground. 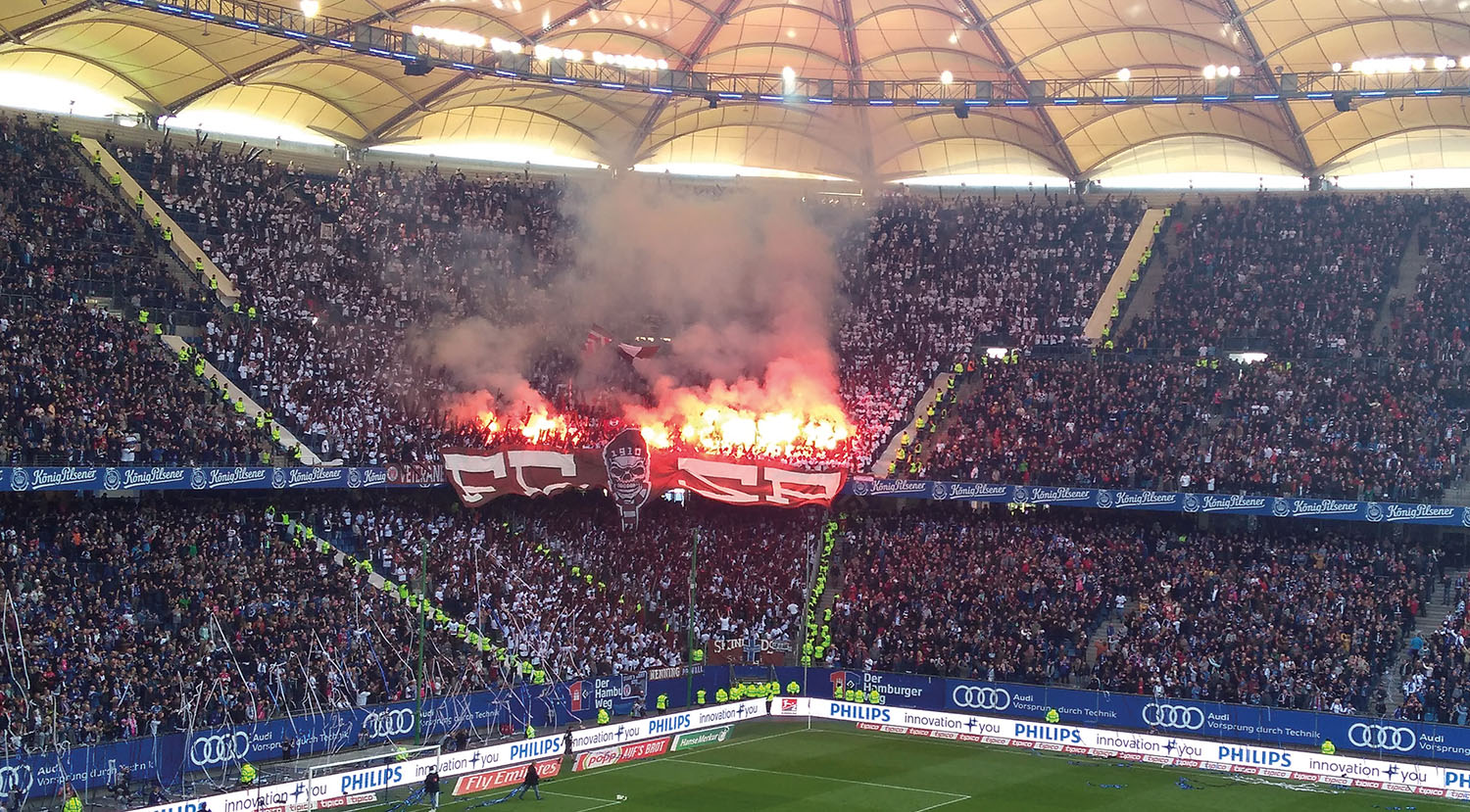 St Pauli fans are lighting up the Hamburg derby

The station at Stellingen is a pleasant place to wait before the crowds clear a little. After one last Bratwurst and a few pints of Astra, it is time for the bus home. It has been another example of why Germany is such a popular destination for football tourists: the tickets are cheap, the atmosphere is impressive and supporters are embraced rather than tolerated.

Book tickets to sold-out matches in Germany via our official ticket partner Nickes.Com! Established in Sweden in 1997, Nickes.com have built a reputation for providing hassle-free hotel and ticket packages to Europe for many thousands of fans – many to otherwise sold-out fixtures in the biggest leagues.

Match tickets are carefully sourced to ensure security and peace of mind, and Nickes.Com work with a wide network of city centre hotels so customers can be assured of a quality stay. They don’t fix flights – allowing you to choose the easiest and most convenient way to travel.

Check out Bundesliga fixtures and booking right here, note the prices given include your match ticket and hotel:

For specific queries email sales@nickes.com– just make sure you mention Futbolgrad if you do!

This is an edited version of an article that originally appeared in Football Weekends magazine.