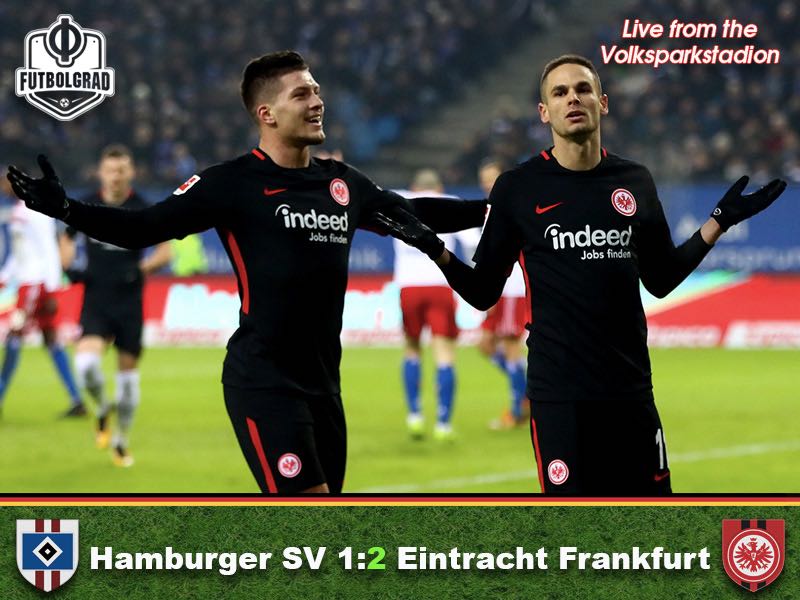 In what was an intensive game Hamburg v Eintracht Frankfurt ends 1-2 for the Eagles from Frankfurt despite an early HSV lead.

Both HSV and Eintracht Frankfurt supporters briefly caused an interruption to the match after they lit up a pyro show as part of elaborate choreographies. Once underway the match started with the sort of flare previously displayed on the stands with Hamburg in particularly pressing for an opening goal. Within nine minutes Hamburg then captured the lead with Kyriakos Papadopoulos showing his air superiority after a corner rising above his marker and noting the goal past Eintracht keeper Lukas Hradecky. Frankfurt, however, fought straight back and in the 16′ Eintracht Frankfurt had equalised after Marius Wolf broke through on the right-wing easily shaking off HSV defender Douglas Santos and then hammering the ball low on Christian Mathenia’s goal, who botched the stop by letting the shot slip through his hands. The goal gave Eintracht confidence and in the 24′ the Eagles had the lead after Mijat Gacinovic capped off a wonderful attacking play involving the once again industrious Wolf, who won the ball inside Hamburg’s half laid the ball off to Timothy Chandler, the US national team player than spotted Gacinovic and the forward made no mistake scoring from close range.

The goal fired Eintracht up even more, and Luka Jovic (25′), Ante Rebic (28′) and Marius Wolf (31′) all missed clear chances to increase the lead for Frankfurt. At this point, Hamburg were fortunate that they still had a chance to get something out of this match. With Hamburg missing stability in midfield, Markus Gisdol decided to make an early change taking off the Brazilian Walace for Albin Ekdal. Walace at this point had been all over the place, and Ekdal at least temporarily brought some much-needed stability to his side. With Walace gone the game lost some of its edge, but on the other hand, Hamburg now controlled much of the proceedings and Frankfurt waited for a counter-attack opportunity to finish the game off. In the 45′ Hamburg’s patient approach almost paid off. Luca Waldschmidt received a ball inside the box and managed to get a shot off from six-yards out, which Hradecky had to stop with his chest.

HSV went into the second half flying and almost equalised right away, but Jann-Fiete Arp and Waldschmidt could not capitalise from a scramble inside the box and Eintracht were eventually able to clear the ball. Then in the 47′ Arp had the next chance, but his dropkick inside the penalty box was spectacularly saved by Hradecky, who got up a fist to guide the ball over the crossbar. Hamburg kept on pressing, and Papadopoulos and Ekdal both had shots blocked inside the penalty box in the 57′. After Ekdal’s attempt HSV fans wanted a penalty, but replays highlighted that although Marco Russ blocked the shot with his arm, it was not an unnatural movement, and referee Manuel Gräfe was right not to point to the spot.

With 66′ gone HSV head coach brought on Tatsuya Ito for Waldschmidt and Hamburg. The Japanese attacking midfielder right away had an impact setting up Ekdal with a low cross inside the penalty box, and the low shot by the Swedish midfielder just about missed Frankfurt’s goal. Ito quickly established himself as the pinpoint of Hamburg’s attacking player. Always available Ito was often able to escape his defenders setting up his teammates inside the box. But unfortunately for Hamburg, many of the runs and crosses were either cleared by a defender or attempts were stopped by Eintracht keeper Hradecky. Overall it was an industrious effort by Hamburg, who despite dominating the second half were unable to convert any of their many chances in the second half and as a result more or less handed Frankfurt the three points.

Marius Wolf was featured by as Eintracht Frankfurt’s player to watch and the forward did not disappoint. Scoring the equaliser in the 16′ Wolf was also instrumental in Eintracht’s second goal and created several more chances that could have seen Frankfurt wrap this game up early. In the second half, Wolf was a bit invisible, which was mostly due to the defensive duties placed in him. 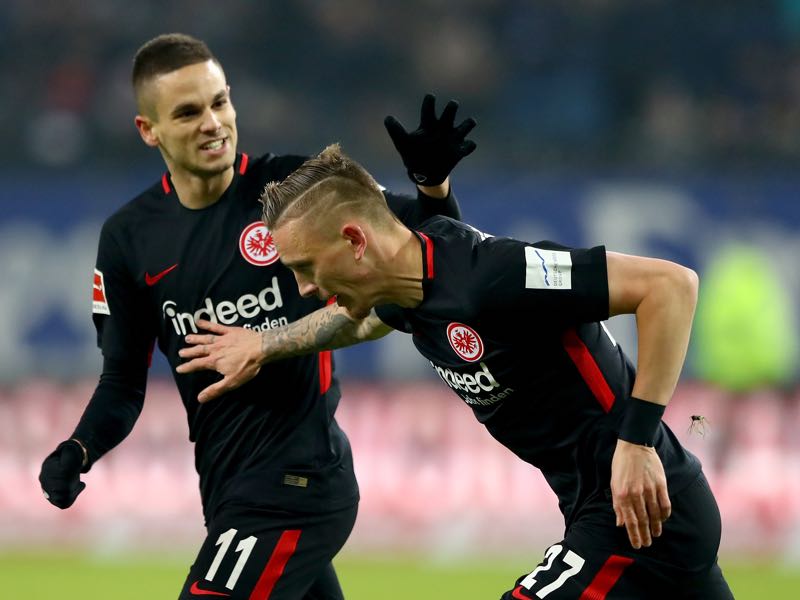 Marius Wolf was the player of the match. (Photo by Martin Rose/Bongarts/Getty Images)

With Freiburg collecting all three points Hamburg have dropped to 16th spot in the standings. Things could be made even worse for the Dino on Wednesday. Should Werder Bremen collect a point, Hamburg will fall even further to 17th spot, which is a direct relegation spot in the Bundesliga. With the winter break just one week away Hamburg are facing a turbulent Christmas period.

Niko Kovac: “Good evening. I think everyone saw it. In the first half, we came back from a deficit dominated and should have been up by three or four goals. In the second half, Hamburg were the more dominant side and we were fortunate not to lose the game. We worked very hard and compliment to the team.” On the match plan: “Yes we wanted speed and use Gegenpressing to get out of the back. The match plan worked well for the first two goals, but not in the second half. Kovac on a heavily rotated side and Abraham’s injury: “David [Abraham] did not break his foot and might be back on the weekend. On the rotated side you have to remember we have a cup game as well. Wolf wasn’t supposed to play 90 minutes, but the changes meant he had to play the full game.” On Eintracht’s future: “There is no certainty. I want a successful future.” On Ante Rebic and Timothy Chandler: “Ante has a ton of abilities. His speed and his physical strength. He has deficits going back, but today he played very well on both sides. As for Chandler coming back from an injury and playing 90 minutes shows that we are on a high physical level.” On Frankfurt’s road record: “We feel more comfortable playing a transition game. We struggle to make the game, which is a requirement when you want to play at home. But in the end the only thing that matters are points and we need all the points we can get, because the table is tight.

Markus Gisdol: “We started well and then make a simple mistake to let Frankfurt back into the game. It was a phase of the game in which we had 20 minutes were we were not in control. We paid heavily for those 20 minutes, because we lost the game in that period. The second half doesn’t matter because we didn’t score and without goals, you can’t win.” On having to make an early substitution: “I didn’t like what I saw and made a change.” On the last two home games: “It isn’t enough, but we have another game on Friday. So we need to get the points there that we missed out on this week.”