Erling Haaland showed why he’s regarded as one of the world’s best strikers on Saturday night, the Dortmund forward netted four times in a comprehensive victory for the visitors–painting the capital yellow and black in the process.

All of the prematch talks centered around Youssoufa Moukoko, the Dortmund teenager turned 16 on Friday, making him eligible to play Bundesliga football. Moukoko had scored 13 times in just four competitive appearances for the U19s this season

As it was, Dortmund took to the field in Berlin knowing victory at the Olympiastadion would take them to second place in the Bundesliga table, one point behind Bayern.

With the champions and Leipzig both dropping points, Matchday Eight could go someway into shaping an early title fight, but as with multiple instances in the past–Dortmund would have to seize the initiative.

The start was sluggish from the visitors and Bruno Labbadia’s match plan of sitting deep and testing Dortmund on the break gave the Berliners the upper hand.

Dodi Lukebakio and Krzysztof Piatek were proving to be a handful for Manuel Akanji and Mats Hummels, but it was Matheus Cunha who looked the most dangerous for the hosts as they controlled the majority of the first half.

Just after the half-hour mark, it was the threatening Cunha who delivered the fixture’s opening goal. Picking the ball up some 30 yards from goal the Brazilian drove at the Dortmund backline, unleashing a shot from 20 yards.

Roman Bürki was left a bystander, the only downside was the lack of any spectators to witness the rocket from the winger’s boots.

As the halftime whistle blew, Lucien Favre was left with a decision–stick or twist? The visitors had been way below their usual standard for the opening 45 minutes.

As you were was the message from the Dortmund boss, no change of personnel but a marked improvement on the pitch was evident. And, in four blistering opening minutes to the second period, the visitors had gone from 1-0 down to 2-1 up.

Emre Can’s give and go with Thomas Meunier tore open the Hertha backline, the defender’s ball to Erling Haaland was matched by the striker’s finish from close range.

The Norwegian barely had time to celebrate his first away goal of the season before he had his second. This time Julain Brandt’s precise pass into Haaland’s path was dispatched expertly, it was the type of finish that had won the forward the prestigious Golden Boy award just 24 hours earlier.

Inside five second-half minutes, Dortmund had turned the fixture on its head–come the hour Haaland would grab his hattrick in wonderful fashion.

Latching on to a mistake at the back, the Dortmund forward rounded Alexander Schwolow to calmly slot home his third. Having not registered a goal away from the Westfalenstadion this season, the hitman suddenly found himself with three.

The visitors had swept their hosts aside after looking out of the fixture before the break, and they weren’t finished either. Their fourth chance of the second half brought a fourth goal, Raphael Guerreiro poked home from close range to effectively kill the game with 20 minutes remaining.

A late charge by Hertha saw Cunha smash home a spot-kick after Akanji brought down Mattéo Guendouzi, but within a minute the sensational Haaland had his fourth. Substitute, Jude Bellingham with a great through-ball, the type the forward thrives on.

Bundesliga history was then made as Moukoko did indeed make his league debut, becoming the youngest-ever player to feature in the league, replacing Nuri Sahin in the record books who was almost 17 when he played for Dortmund against Wolfsburg in August 2005. 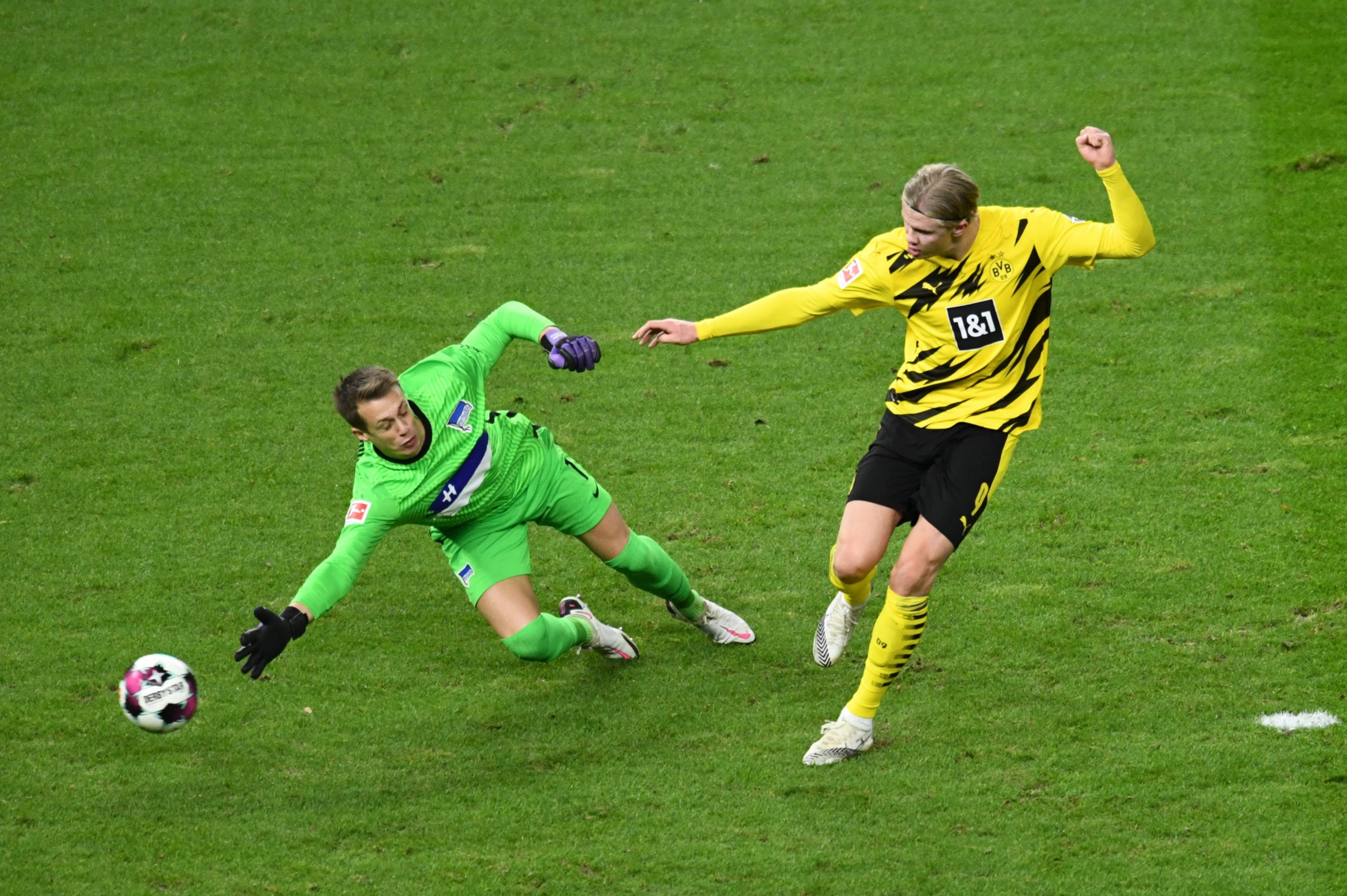 A frustrating first half for the forward, but the second showed why he’s regarded as one of the best strikers in the world currently. Four exceptionally well-taken goals powered the visitors from deadbeat to unbeatable.

The star of the first half, at one point the winger seemed to be everywhere–omnipresent he caused Favre’s men a world of problems, his finish from 20 yards was sensational, as was his well-taken penalty.

With three key passes and one assist in the opening moments of the second half, Brandt had just as an important contribution as his Norwegian teammate. Tearing down the left, Bruno Labbadia’s men had no way to counter his presence.

Subs: 62′ Bellingham for Dahoud, 76′ Piszczek for Can, 77′ Reyna for Reus, 85′ Moukoko for Haaland, Schulz for Guerreiro