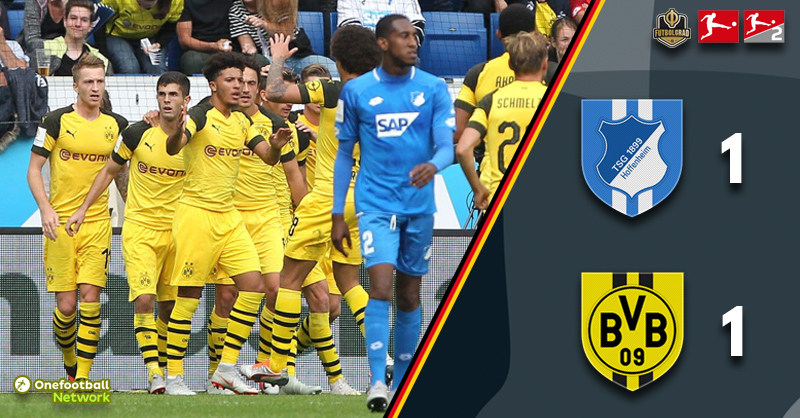 Hoffenheim v Dortmund was a fascinating affair in which die Kraichgauer failed to capitalise from their dominance allowing Dortmund to escape with one point from Sinsheim.

It was all Borussia Dortmund to start the match regarding possession. Die Schwarzgelben had 79% ball possession in the opening 15 minutes but at the same time did not manage a single shot on goal.

Instead, Hoffenheim created the first chance of the match in the 18′ minute. Niko Schulz played a low cross into the centre of the box where Leonardo Bittencourt got stopped by rushing out goalkeeper Roman Bürki.

Tactically, it was a fascinating match at that point with Hoffenheim trying to break quickly whenever Dortmund lost the ball in the attacking third. Dortmund, in the meantime, struggled to cash in on their possession and while Hoffenheim created five shots on goal BVB had none in the first 35 minutes.

Just before halftime Hoffenheim took the lead – a cross from the right was poorly cleared by Abdou Diallo right to the feet of striker Joelinton, who made no mistake to score from 15-yards out to give Hoffenheim the deserved lead in the 44′ minute.

Hoffenheim kept at it to start the second half. Bittencourt got at the end of a cross and wrestled past Akanji to unleash a close-range shot that was stopped by Bürki (47′), and Andrej Kramarić saw a shot deflected past the goal (49′).

The second goal was only a matter of time. Hoffenheim thought they had it in the 50′ minute, Ermin Bicakcic’s got at the end of a corner and scored a fantastic header. But the goal was ruled out to be offside, much to the confusion of Hoffenheim supporters and the coaching staff. Replays later showed that Bicakcic had indeed come back from an offside position.

Die Kraichgauer were not discouraged, however. Joelinton hit the post on the 55′ minute. And Dortmund? Die Schwarzgelben finally had their first chance in the 57′ minute, Shinji Kagawa’s shot from inside the box gracing the far post of Oliver Baumann’s goal.

In the 75′ minute, things went from bad to worse for Dortmund. A long ball from Hoffenheim’s third saw Kramarić off to the races he was challenged by Dortmund defender Diallo just outside the box, and referee Osmers deemed it to be a professional foul. As a result, Diallo was sent off with a straight red card in what was a harsh decision by the referee.

A man down Dortmund finally woke up. Die Schwarzgelben pressed Hoffenheim into their third, and in the 84′ minute, Marco Reus created the goal by sprinting into the box and delivering a point-blank pass that had to be simply tapped across the line by American Pulisic.

In the 91′ minute, Ishak Belfodil could have, should have, scored the winner. A low cross found the Algerian striker wide open just a yard from goal and he somehow managed to shuffle the ball over the crossbar. It was the final act of a match that had it all and would have deserved a few more goals.

Like midweek in the Champions League Christian Pulisic was Dortmund’s saviour. The American got the start this time but like his entire side somewhat struggled in the first half. But instead of giving up the USMNT player showed determination and after Dortmund went down to ten-man showed urgency creating chances and was then at the right place to score the equaliser. 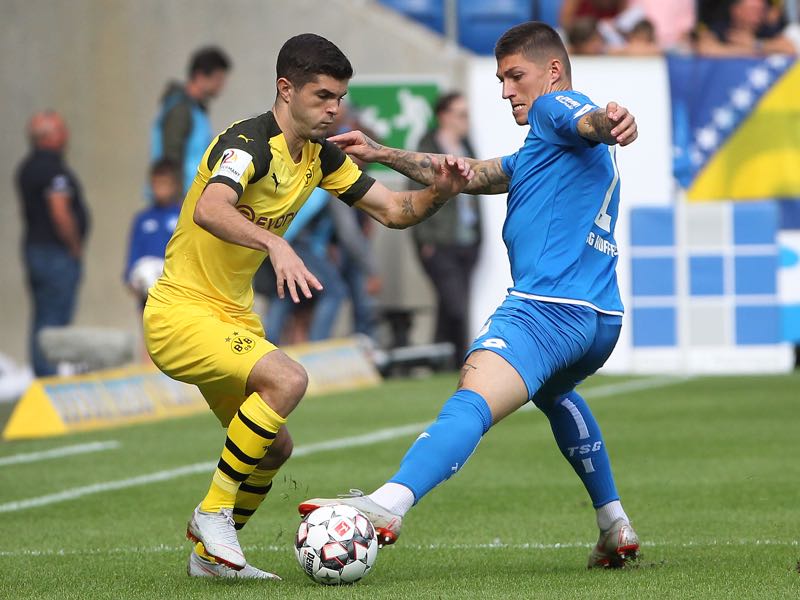 Dortmund still look like an unfinished project. Like midweek against Brugge Dortmund still, lack the punch-through in the final third. But one gets the sense that Dortmund lack a killer, a striker, a target man, who can create a bit more danger in the opponent’s penalty box. It will be interesting to see whether Paco Alcacer can be that man.