Hoffenheim vs Schalke saw a point earned for each in a hard fought and entertaining 1-1 draw, Andrej Kramaric putting the hosts ahead from the penalty spot and a Nabil Bentaleb spot kick evening it up.

Penalty controversy will dominate the headlines but both clubs will ultimately be satisfied with the result. 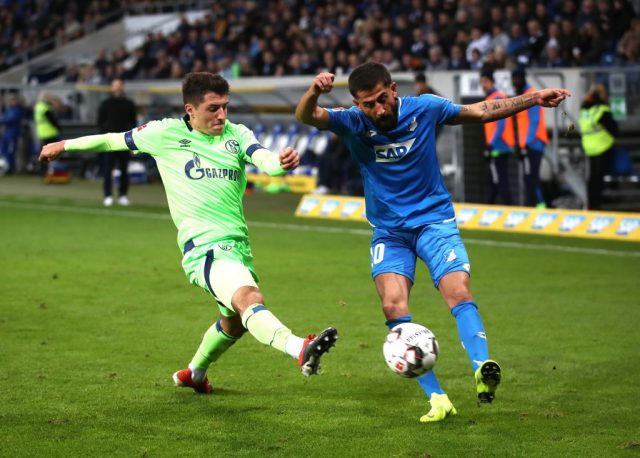 Kerem Demirbay is challenged by Alessandro Schoepf during a hard fought Hoffenheim vs Schalke. (Photo by Alex Grimm/Bongarts/Getty Images)

Steven Zuber tested Ralf Fährmann before hitting the bar as Hoffenheim started on the front foot. Guido Burgstaller had the best chances for the visitors in the first half, a volley into the side netting from close range the pick of the bunch.

Fährmann then came to the rescue with a double save to deny Karim Demirbay and Joelinton. Hoffenheim started well after the break but couldn’t pick out an unmarked Andrej Kramaric on two occasions, but the Croatian would get his goal from the penalty spot to put the hosts 1-0 up.

Suat Serdar had a great chance deflected wide by Kasim Adams before Nabil Bentaleb equalised with a penalty for Schalke. Bentaleb then had a volley spectacularly saved by Oliver Baumann before a late free kick to Hoffenheim saw Joelinton’s header saved by Fährmann.

The match swung back and forth with Schalke coming home strong, but with everything considered a draw was a fair result.

Referee Robert Kampka awarded Schalke a penalty after Steven Zuber was adjudged to have handled Daniel Caligiuri’s cross. Zuber had gone to ground with the ball ricocheting off his body onto his arm, but after consulting VAR and the touchline monitor the decision was reversed.

Hoffenheim were then awarded a penalty after Bastian Oczipka was ruled to have handled the ball on the edge of the area. Despite another VAR intervention and strong protests from the Schalke players, the decision stood and Kramaric slotted home.

Caligiuri burst into the box at the other end after a swift counter attack with Ermin Bicakcic clipping the heel of Schalke’s right-backs. Kampka awarded another penalty and Bentaleb made no mistake.

I’ll let you watch the replays and make your own mind up. However, there was no doubt that penalty decisions were a big talking point from this match. 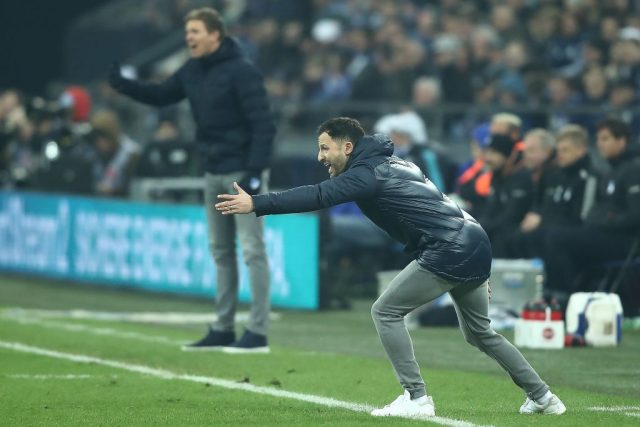 Julian Nagelsmann and Domenico Tedesco know each other well, both as friends and rivals. (Photo by Christof Koepsel/Bongarts/Getty Images)

Julian Nagelsmann stayed true to his preferred formation but Domenico Tedesco made a switch, reverting to a back four for the first time since Matchday 8 in the 2-0 home defeat against Werder Bremen.

Sebastian Rudy played the holding role with Suat Serdar and Alessandro Schöpf either side, Nabil Bentaleb allowed to play with freedom behind Guido Burgstaller and Haji Wright. Florian Grillitsch had to adjust to contain Bentaleb with both sides looking for avenues to exploit.

Serdar and Schöpf were largely tied up with Hoffenheim’s wing-backs, Hoffenheim dominating most of the match until Tedesco made a tactical switch in the 70th minute. Benjamin Stambouli and Weston McKennie replaced Suat Serdar and Haji Wright as Schalke reverted to a familiar three man defence.

Bentaleb equalised soon after and the visitors had good chances to go ahead as the match swung back and forth. It was a great tactical battle between the two youngest managers in the Bundesliga with many more to come.

Schalke’s difficulties have been well document this season, but this was a solid performance as they came back from 1-0 down to earn a point at a difficult venue.

Tedesco’s side have failed to win any of their last six away matches in all competitions, despite the penalty shootout victory in the DFB-Pokal at Köln that ended 1-1.

This result will bring some confidence to the squad before the highly anticipated derby against Borussia Dortmund on Saturday. 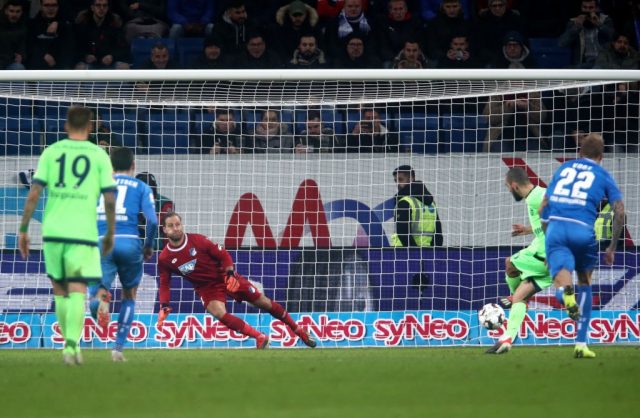 Nabil Bentaleb scores from the penalty spot during Hoffenheim vs Schalke 04. (Photo by Alex Grimm/Bongarts/Getty Images)

Hoffenheim have found it extremely hard to keep clean sheets. Their failure to keep Schalke off the board meant that Nagelsmann’s side have kept only one clean sheet in 20 competitive fixtures this season.

Replacing Andrej Kramaric with Reiss Nelson in the 64th minute was the catalyst for Schalke getting back into the game. Dangerous in attack, Nelson doesn’t provide as much defensive cover as Kramaric with the game becoming much too open and the hosts losing control.

Caught out numerous times in transition, Hoffenheim lost their shape and lost the central midfield battle. Nagelsmann’s options are limited in that respect with Havard Nordtveit, Dennis Geiger, Lukas Rupp and Nadiem Amiri all injured but their inability to shut teams out is becoming a regular occurrence.

If Hoffenheim are eliminated from Europe as many expect and some of those players return from injury, expect the extra time on the training pitch to work in Nagelsmann’s and Hoffenheim’s favour as they focus on securing another top four finish.